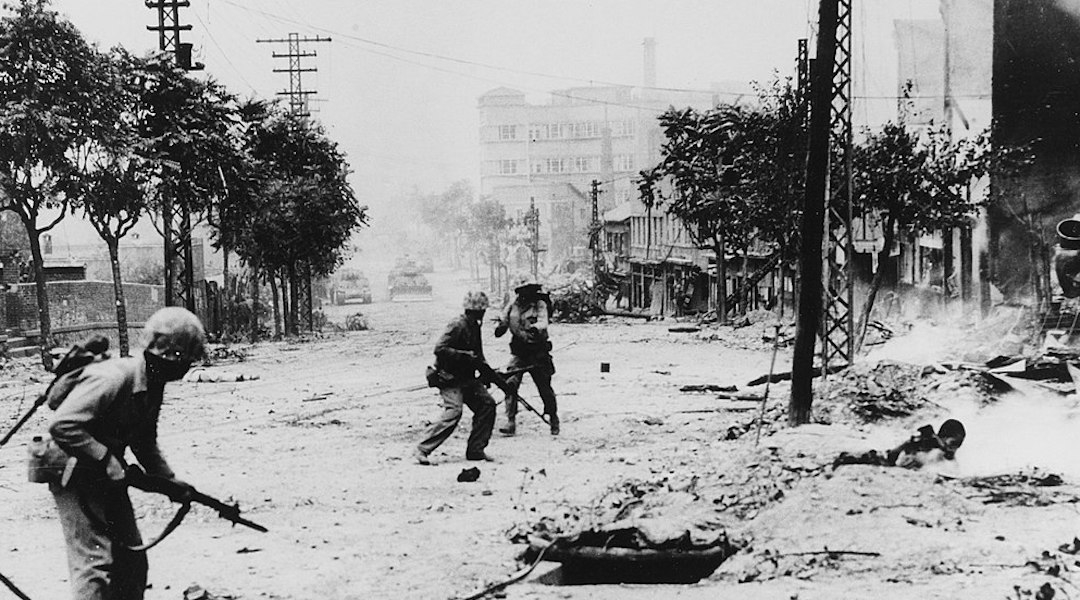 Korean soldiers in combat on the streets of Seoul, 1950. (Naval Historical Center, Department of the Navy/Wikimedia Commons)
See Original Daily Bulletin From This Date
Advertisement

Israel emerged this week-end as the central figure in United Nations efforts to secure a peaceful solution of the Korean crisis as the Commonwealth Conference in London began consideration of the Israel plan for an overall Korean settlement prier to its presentation before the U.N. General Assembly.

The plan was no longer in Israel’s name, however. It reached London via the U.N. three-man cease-fire group composed of Assembly President Nasrollah Entezam of Iran; Lester Pearson, Canadian External Affairs Minister; and Sir Bengal Rau, of India. This group adopted the general framework of the Israel plan as a final set of peace “principles” and immediately dispatched it to the Indian Prime Minister. It was elaborated in detail before the Assembly’s Political Committee by chief Israel delegate, Ambassador Abba Eban.

Stressing that the 12-nation Asian-Arab cease-fire plan rejected by the Chinese Communist Government had the defect of vagueness, incompleteness and a lack of sequential integration of its two parts–a cease-fire and a general conference of all outstanding Far East issues–Mr. Eban offered this stage-by-stage peace formula:

1. An immediate cease-fire; 2. An affirmation by all governments concerned of acceptance of the U.N. objective for free nation-wide elections to establish a unified and independent Korea; 3. Inclusion of Communist China in the U. N. Commission on Korea which will supervise elections and rehabilitation; 4. An agreement for the progressive withdrawal of all non-Korean troops; 5. Initiation of reconstruction projects under U.N. auspices; 6 A U.N. and Chinese Communist guarantee that Korean integrity and independence will be respected by all states; 7. A declaration that upon acceptance of the above steps and agreement on their implementation, urgent consideration should be given “to all questions affecting the relations” of Poking with U.N.

Mr. Eban emphasized that the plan contained elements which all sides have given adherence to, that a definite chronological sequence was offered and that the whole problem was wrapped up in one package. It is known, however, that the Arab states were anxious to see the peace initiative returned to the Asian-Arab bloc, and it was said they were seeking to persuade other members of the coalition to redraft their own resolution proposing a general conference on Far East issues as a substitute for the Israel plan.