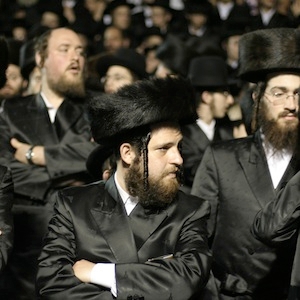 Followers of Rabbi J. J. Twersky, the Skvirer Rebbe, voted today to incorporate their community near Spring Valley, N. Y. as a village, to be known as New Square, the Americanized form of Skvir, the town in Russia which was the birthplace of the leader of the Hassidic sect. The village became the 12th in Rockland County, N. Y. and the first to be incorporated since 1929. The residents voted unanimously in favor of incorporation.

The first family from among the followers of Rabbi Twersky moved into the new community in 1957 after the site for the entire village was purchased from a dairy farmer. Sixty-nine houses have since been built, and are occupied today by 79 families numbering 539 persons.

The synagogue is not yet completed and daily and Sabbath services are being held in the roofed-over basement structure which village residents hope to complete in the near future. Two of the 69 Cape Cod houses serve as school facilities for the village’s 350 children.

Residents of New Square are expected to hold elections later this month when a mayor and four trustees will be named. Louis Mermelstein, who managed the community unofficially since its inception three years ago, is expected to be elected mayor of the village. The role of Rabbi Twersky following election of officers probably will continue to be one of advisor, in spiritual and other matters.

While nearly all residents of the community are hassidim of Rabbi Twersky, leaders of the group have emphasized that all persons will be welcome to live in the village. Although looking forward to the expansion of the village with a post office, shopping center and other facilities to make life pleasanter, community residents are hoping that no changes will be introduced which will alter their religious way of life.