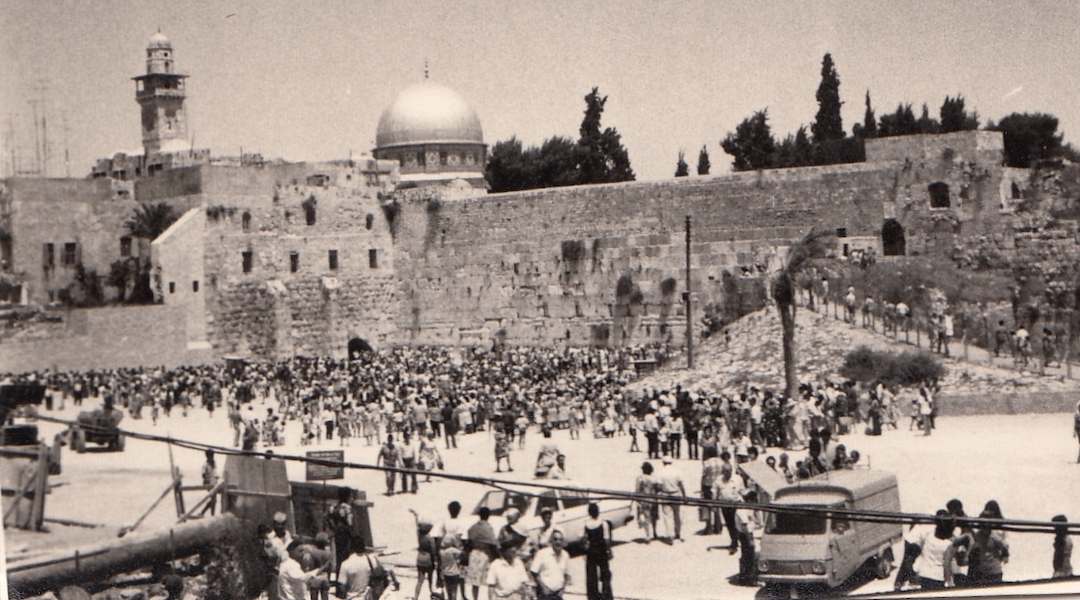 Thousands of Israeli Jews poured into old Jerusalem today to celebrate Shavuot at the Wailing Wall, the holiest of Judaism’s shrines, for the first time in 19 years.

The observance of the holiday at the wall, partly a relic of Solomon’s Temple, also marked the first time in centuries that Jews were able to worship at the Wall without the restrictions imposed on them by the Roman, Arab, Turkish and British successive masters of the holy site. The Shavuot services have their origin in a Biblical injunction calling on Jews everywhere to make a pilgrimage to the Temple during the three major Jewish festivals.

Israeli army engineers rushed yesterday to completion the task of building an access road over which the thousands of Jews crossed today from Mount Zion through the Old City to the Wall. Only pedestrians were allowed in the area for the holiday. While the engineers finished the road yesterday and removed mines and other debris, patrols were busy cleaning out remaining sniper positions in the Old City from which occasional shooting took place.

The head of the Samaritans, the descendants of the ancient Palestinian sect which had followed variations of certain portions of the Biblical practice of Judaism, entered Israel today to meet with members of his sect for the first time since the establishment of the Jewish State. He was accompanied by the cantor of the Samaritans.

The Samaritans expressed their appreciation to the Israeli authorities over the fact that the 300 members of the sect, who are not considered Jews, would be able to observe the Shavuot festival together at their holy place of Mount Gerizin in the territory west of the Jordan River now occupied by Israel. Some 60 of the Samaritans had lived in Israel.

ISRAELI UNITS IN SINAI ORDERED TO GIVE AID TO WANDERING EGYPTIANS

An order was issued today to all Israeli units in the Sinai Peninsula to give immediate aid to any Egyptian soldiers, found in the Peninsula, who offered no resistance, in a massive Israeli effort to save the estimated 10,000 Egyptian troops believed to be wandering in the burning desert without water. After such assistance, the Egyptians will be placed on trucks bound for the Suez Canal zone, given water and left to make their way back to Egypt.

Under other orders, special Israeli units hunted through the desert in a collection of huge quantities of discarded Egyptian equipment, including arms, ammunition and fuel discarded by the routed Egyptian troops. A spokesman said that captured Egyptian supplies and some of the equipment seized from the Jordanians had already been phased into Israeli armored units, including American Patton M-48 tanks supplied to Jordan.

(Baron Edmund De Rothschild, returning to Paris from a week’s visit to Israel, said in Paris yesterday that the Soviet-made military equipment abandoned by the Egyptians in their pell-mell retreat last week in the Peninsula was worth about $2,000,000,000.)

Gen. Yeshayahu Gavish, commander of the southern front, told a press conference in Tel Aviv that Israeli units seized intact in the Sinai Peninsula an Egyptian site for nine Soviet-made surface-to-air missiles during the drive across the Peninsula. The SA-2 missiles are a standard Soviet defense weapon exported to many countries and used against United States aircraft in North Vietnam. Gen. Gavish said some missiles had been fired at Israeli aircraft during the Sinai fighting but that all had missed.