Mondale Has Unblemished Record on Issues of Jewish Concern 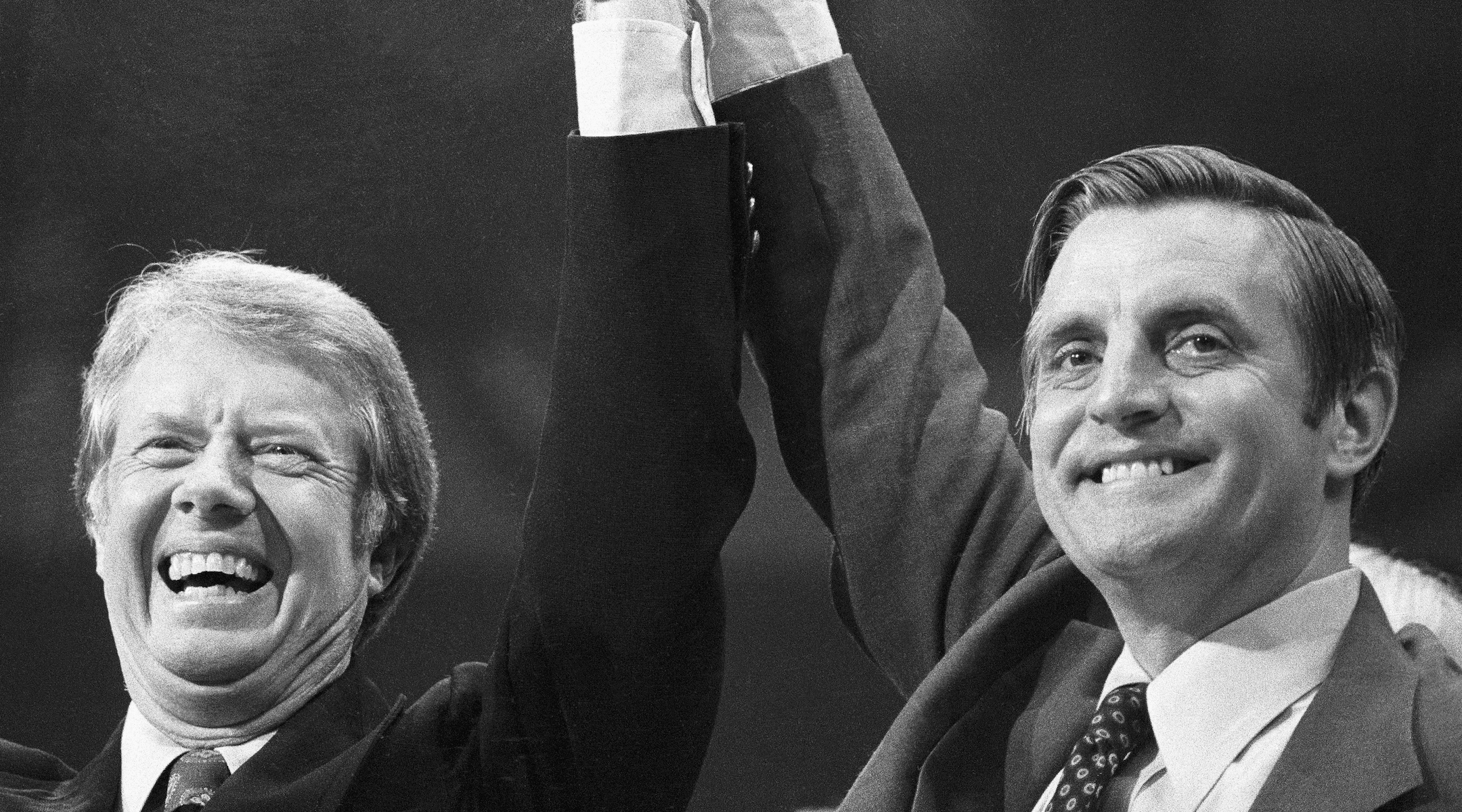 Jimmy Carter and Walter Mondale join hands to accept the cheers of the of delegates after they gave their acceptance speeches to the Democratic Convention in New York City, July 15, 1976. (Bettmann/Getty Images)
See Original Daily Bulletin From This Date
Advertisement

Walter F. Mondale, the 48-year-old Senator from the Minnesota farm belt who Jimmy Carter named as his Vice-Presidential running mate here this morning has an unblemished record of support for Israel and for the civil rights and right of emigration of Soviet Jews. Carter, who won a first ballot nomination for President at the Democratic Party convention last night, referred to Mondale’s Senate record when he announced his choice at a press conference.

“On very critical votes” such as aid to Israel, Mondale is “the best and most compatible with me,” of any of the six Senators who were under consideration for the Vice-Presidential office, Carter said. He added, “I intend to keep my promises to the American people and I am sure Sen. Mondale will help me keep those promises.”

Mondale, who appeared with Carter, stressed that he “was not interested in a ceremonial post” and that Carter would use the Vice-President in “a very broad range of responsibilities in domestic and foreign policies.”

Mondale’s political mentor was Sen. Hubert H. Humphrey (D.Minn.), whose Senate seat he filled when Humphrey became Vice-President in the administration of Lyndon B. Johnson in 1964. He has consistently shared Humphrey’s strongly supportive views on issues of concern to American Jewry during his 12 years in the Senate. Mondale was one of the 76 Senators who signed a letter to President Ford on May 21, 1975 urging the

Six months earlier, he was among the 71 Senators who sent another letter to Ford supporting Israel and rejecting the PLO. In 1973, Mondale was a strong backer of legislation that provided Israel with $2.2 billion in emergency assistance following the Yom Kippur War.

Mondale supported the amendment to the Foreign Trade Act authored by Sen. Henry M. Jackson (D. Wash.) that linked U.S. trade benefits to the Soviet Union with an easing of Soviet emigration policies. Most recently. Mondale opposed an amendment to the Foreign Aid Bill by Sen. James Abourezk (D.SD) that, in effect, would have cut off U.S. aid for Israel.

Of the six Senators Carter was considering for the Vice-Presidential nomination, Mondale was the only one to vote against the retention of Air Force Gen. George S. Brown as chairman of the Joint Chiefs of Staff after Brown reiterated his allegation that U.S. Jews exert undue influence over Congress.