Behind the Headlines: Israel Concerned over Saudi Purchase of Arms from the U.S. 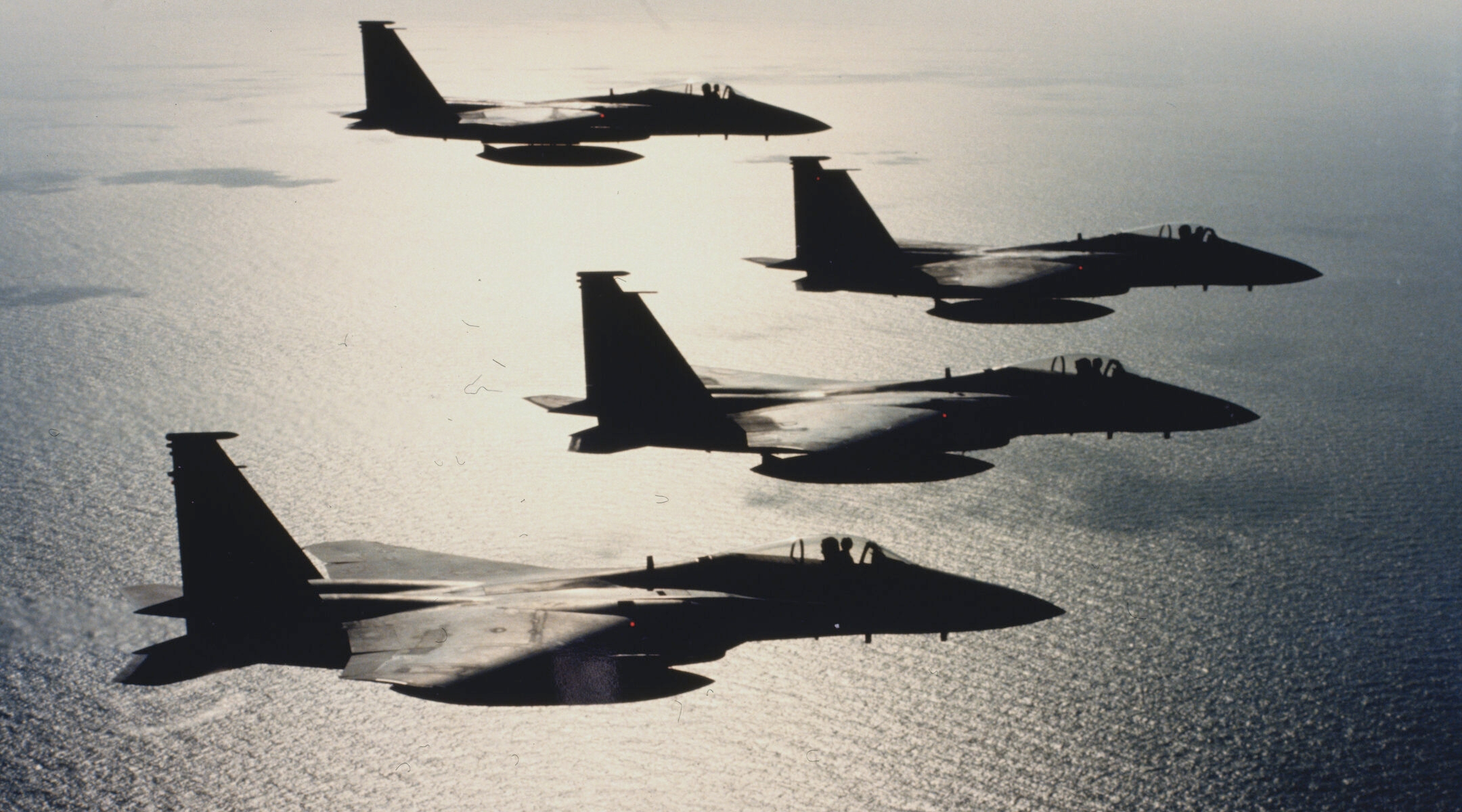 F-15 Eagle fighters fly over the Gulf of Mexico in 1985. (Bettmann/Getty Images)
See Original Daily Bulletin From This Date
Advertisement

The serious concern expressed in Israeli military circles over Saudi-Arabia’s huge purchases of advanced weaponry from the United States and especially the Saudi request for equipment that would endow their American F-15 aircraft with long-range offensive capabilities, stems from the perception of the dangers facing Israel on its eastern front.

According to these circles, the American military hardware being accumulated by the Saudis is far in excess of what is necessary to defend that large, sparsely populated country. It makes sense only if the weapons are intended — as the Israelis believe they are — to bolster the forces of the Arab confrontation states on Israel’s east — Jordan, Syria and Iraq.

Those countries can, already, field more than 5000 tanks in an offensive against Israel. Moreover, they possess the military infrastructure to absorb large quantities of war materials, including aircraft, delivered from Saudi Arabia. There is, for example, nothing to prevent the stationing of Saudi F-5 combat jets in Jordan which has the facilities and know-how for their operation.

Israeli military sources say there is no conceivable reason why the Saudis need additional fuel pods to increase the F-15 operational range from its present 720 kilometers to over 1600 kilometers unless offensive operations against Israel are intended.

Nor is there any reason why Saudi Arabia would need three times as many Jaser-guided bombs as Israel possesses or, with a regular army of only 44,500 men, electronic command control equipment capable of coordinating 15 divisions which is — not coincidentally — the approximate size of the combined Jordanian-Syrian-Iraqi forces on the eastern front.

POINT TO ROLE OF SAUDI ARABIA

The Israelis point out that Saudi Arabia has supported Syrian, Iraqi and Jordanian forces in the past. Except during the 1956 Suez campaign, the Saudis have sent expeditionary forces and material to the Arab states directly in conflict with Israel.

In the 1967 war, they dispatched a force to Jordan where it remained until 1977. In the 1973 war, the Yom Kippur War, the Saudis sent troops to Syria. In 1974, 1975 and 1977, Saudi forces participated in joint military exercises with the eastern front states and Saudi aircraft were stationed in the host countries.

In the event of a new war against Israel from the east, the Saudis could participate even without sending an expeditionary force across their borders. They are building three major military bases, one of which, Abouk, is only 216 kilometers’ flight from Eilat. With added fuel pods and equipment for mid-air refueling, Saudi jets could reach any target inside Israel.

The Israelis grant that U.S. intentions are not to provide the Saudis with means to destroy Israel but to reinforce “moderate” Saudi Arabia so that it can function, along with Egypt, as a firm base for American support of friendly nations in the Middle East and adjoining regions.

But the Americans should ask themselves, Israeli experts on Arab affairs say, whether the massive supply of arms to the Saudis is indeed the best way to achieve that objective or whether it could prove to be a disaster.

These experts fear that the U.S. has not learned the lesson of several decades of military and diplomatic mishaps which resulted from arming and otherwise supporting corrupt or unpopular regimes and rulers. They cite as examples Cuba, Vietnam, Libya and North Yemen where, after the pro-American rulers were overthrown in popular uprisings or coups, the American weapons were used against the U.S. or its Western allies and their interests.

The latest case in point is Iran and many informed Israelis and experts abroad wonder whether the Saudi royal family may not soon go the way of the Shah.

According to these sources, the Saudi monarchy is very unstable and is threatened more from within than from outside elements. The bloody events surrounding the seizure of the Koaba Mosque in Mecca, the assassinations on personal or religious grounds within the royal household and court and the presence of Moslem religious fanatics who are infuriated by the monarchy’s attempts to westernize the country, all pose potential dangers.

The country is volatile because 85 percent of its population is illiterate and 65 percent is rurally based. Many young illiterates, flowing into the city but finding no work, one ripe for subversive propaganda. Although oil has made Saudi Arabia one of the richest countries in the world, only one percent or its population is employed in the oil industry and of these, half are resident aliens.

Out of 1081 physicians in the country, 938 are foreigners. There is a Moslem Shi’ite minority (the predominant sect in neighboring Iran) centered in the oil producing regions where unrest is said to be rife.

All of these factors make for instability. By arming Saudi Arabia, Israelis say, the U.S. may be providing the very weapons that will soon overthrow the pro-Western monarchy. It is not only Israel’s security but American interests that are at stake.