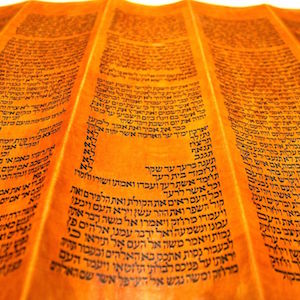 Tisch, who reported that more than 150 scrolls have been stolen in recent years in New York State alone, said the Torah Dealer’s Registration bill was introduced in the State Senate by Sen. Norman Levy (R-C, Merrick) and in the Assembly by Assemblyman Sheldon Silver (D. Manhattan).

The new law, which adds Article 39-A to the state’s General Business Law, is titled “Merchants of Torah Scrolls.” It requires a merchant who regularly deals in the sale of scrolls to provide buyers with a document which discloses the identity of the person from whom the merchant bought the scroll, and by what authority the person has sold the scroll to the merchant.

The document also must list any unique characteristics of the scroll which would be useful for identification purposes. The merchant must maintain for a 10-year period a chronology of the copies of the disclosure statements he has issued for scroll transactions.

REQUIREMENTS OF THE LEGISLATION

The legislation requires the conspicuous posting of a notice in each place of business in New York State in which a merchant is regularly engaged in the sale of Torah scrolls. The sign is to read;

“Article 39-A of the New York General Business Law requires merchants to disclose in writing certain information concerning Torah Scrolls. If you are a prospective recipient of a Torah Scroll from a merchant, that information must be given to you in accordance with and under penalty of that law.”

The Governor’s office said the law applies to the sale, exchange, consignment or donation of a Torah Scroll and permits the transferee to rescind the transaction where the required information is not provided. The new measure will be implemented by the Attorney General’s office.

Peggy Tishman, chairperson of the JCRC Commission on Jewish Security, hailed the new law as a much-needed safeguard. She praised the work of Marc Stern, counsel for the American Jewish Congress, who drafted the measure, and Dennis Rapps, executive director of the National Jewish Commission on Law and Public Affairs (COLPA) who assisted Stern.

Ms. Tishman said the new law was the product of “a community effort, in which all of the rabbinic, synagogal and community agencies have cooperated.”

The law’s protection covers only transaction in New York State but could affect scruffs of dubious ownership coming into the state from other areas.

To help scribes and other scroll dealers to comply with the new law, forms in Yiddish, Hebrew and English are being prepared by Stern for distribution by JCRC, said Malcolm Hoenlein, JCRC executive director. Violation of the new law is punishable by fines not to exceed $250 for each offense.