Behind the Headlines: Greece and Israel 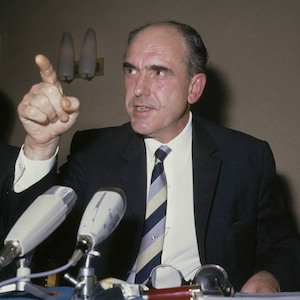 Greece, the only member of the European Economic Community (EEC) which has extended full diplomatic recognition to the Palestine Liberation Organization, has launched a discreet campaign to improve its battered relations with Israel.

Israel was vilified in the state-run media, Greek dockworkers boycotted Israeli ships, the Greek Orthodox church joined cultural and philanthropic groups in donating blood, food, funds and clothing to the Palestinians, and the Prime Minister’s wife, Margaret, led a march on the Israeli Mission here.

After being thrown out of est Beirut by the Israelis in August of 1982, PLO chairman Yasir Arafat chose Greece instead of an Arab nation as his first stop. Arafat embraced Papandreou, and Papandreou said: “I feel deeply moved at receiving … this great fighter for the freedom of his people.”

Less than a year earlier, following Papandreou’s election victory, Arafat was invited to Athens. Papandreou, who was a York University (Toronto) economics professor when a military junta ruled Greece, recognized the PLO on a de facto basis. By doing so, he upgraded the PLO’s diplomatic status to match that of Israel’s.

Greece, which in 1947 cast a vote against the United Nations Palestine partition plan for fear of upsetting the Arabs, there by reinforced the pro-Arab character of its Middle Eastern policy.

SEEKING TO IMPROVE RELATIONS WITH ISRAEL

Of late, however, Greece has sought an improvement in its relations with Israel. As one topranking official in the Foreign Ministry put it in a recent interview: “Just because we oppose certain aspects of Israeli policy doesn’t mean that our bilateral relations must remain stagnant.”

Although Israeli diplomats welcome the thaw, they entertain no illusions about the basic nature of Greek policy in the Middle East. “We encourage any improvement forward,” one source said. “But on basic issues, we can’t go too far.”

First and foremost, the Israelis do not expect Greece to grant Israel de jure recognition. Nor do they believe that the Greek government will ever reconcile itself to Israeli positions on the occupied territories and the Palestinians.

Since the Six Day War, Greece has called for a complete Israeli withdrawal from the territories and for the right of the Palestinians to exercise selfdetermination as they see fit. Greece, like Israel, supports the Camp David peace process. But Greece, unlike Israel, backs President Ronald Reagan’s 1982 peace plan and the Arab League’s Fez proposals. The Greeks favor Israel’s survival behind secure borders, but they have traditionally been close to the Arabs.

Virtually dependent on Arab oil, they export about 25 percent of their raw and finished goods to Arab markets. And, as Papandreou has pointed out, Greece wants to “develop and enrich” its political and commercial links with its Moslem trading partners

Yet, as the Greeks have gradually discovered, a vigorous pro-Arab policy has its limitations. Expected Arab investments in Greece have not materialized on a scale imagined by the government. “We expected much larger economic co-operation from the Arab states,” a Greek official admitted.

The Arabs, say reports, have prefer ‘ to invest their petrodollars in Western Europe and in the U.S. Without the massive influx of Arab capital, Greece is hardpressed to carry out ambitious plans for economic and social reform.

Greece, too, has been disappointed by the fact that the Arabs have reduced their share of Greek imports and greatly increased their imports of Turkish products. In the past few years, Turkey– the first Moslem country to recognize Israel–has downgraded relations with the Jewish state and has landed juicy construction contracts in Arab lands.

The Greeks have failed in their effort to rally the Arabs behind them in their dispute with Turkey over Cyprus and the Aegean Sea. Normally, conservative Arab regimes like Saudi Arabia and Morocco back Turkey, while radical governments like Syria and South Yemen support Greece. Greece had hoped for wall-to-wall Arab backing in return for its favorable shift on the Palestinians and the PLO.

Arab considerations aside, Greece’s aggressive pro-Arab policy has tended to alienate Jews–particularly in the U.S. At the height of the anti-Israel hysteria, which veered into anti-Semitic directions at times, some Jewish businessmen in the U.S. and in Western Europe began a spontaneous boycott of the Greek economy. And, it is reported, some Jewish travel agents refused to include Greece on their itineraries.

According to Israelis in this bustling capital, Greece wants to improve relations with Israel for three reasons:

*The Greeks are disenchanted with the Arabs for not having invested as much funds in the Greek economy as they were apparently led to think.

*The Greeks want to mend relations with the West and with the U.S. in particular. Under Papandreou’s Socialist government, Greece has clashed repeatedly with the U.S. over a variety of questions, ranging from the deployment of missiles in Europe to American policy in Central America.

*The Greeks want to defuse anti-Greek sentiment in diaspora Jewish communities, in part to win U.S. Jewish support for its perennial conflict with Turkey, a U.S. ally.

With a minimum of publicity, Greece has moved away from the shrill anti-Israel rhetoric of 1982. By the same token, Greece has assured its Arab friends that its policy will not undergo any drastic revision.

“An improvement in our relations will be very controlled and balanced,” an Israeli diplomat observed. “Greece will be very apprehensive about doina anything that smacks of an open improvement.”

In his view, the slow improvement began last year, when Papandreou conferred with Edgar Bronfman, president of the World Jewish Congress; Joseph Lovinger, head of the Central Board of Jewish Communities in Greece, and Ephraim Evron, Israel’s former Ambassador to the U.S., on the island of Corfu. Meanwhile, the climate brightened when David Kimche, the Director-General of Israel’s Foreign Ministry, met with Karolos Papoulias, the Greek Undersecretary, in Athens. It was given further impetus when Margaret Papandreou went to New York and held talks with Jewish women’s groups.

Nearly two months ago, a high-level Greek delegation attended the opening of Hellenic House at the Hebrew University in Jerusalem. The Greek party, though not in Israel in an official capacity, consisted of a former Greek President, the Mayor of Salonika, the Secretary-General of the Ministry of Science and Culture, and about 100 other Greeks of Jewish and non-Jewish descent.

Later this month, the first official Greek commercial delegation is expected to visit Israel. It will be led by the president of the Athens Chamber of Commerce. Israeli officials contend that bilateral trade can easily be doubled to $150 million a year. Before the year is out, Israel will probably play host to the Undersecretary of the Director of Political Affairs of the Greek Foreign Ministry.

Amid these signs fo rapprochement, Israelis are pleased to note that overt media attacks on Israel have all but ceased. In spite of all this, observers do not expect Greece to upgrade Israel’s diplomatic standing.

Last May, the European Parliament in Strasbourg voted by 133 to 31 to recommend to Greece to establish full relations with Israel. But the Greeks have not complied, and Israel’s Mission here remains on the representative rather than on the ambassadorial level.

Asked why Greece declines to accord Israel unfettered recognition, a Foreign Office functionary said: “It’s a question of principle.” Greece, he said, will not give Israel de jure recognition until Israel withdraws from the occupied areas and agrees to Palestinian statehood under a PLO administration. The official offered no clear answer why Greece, prior to the Six-Day War, refused to offer Israel de jure recognition.

In the absence of a major Arab-Israeli peace agreement, Israel’s relationship with Greece is bound to be correct at best. “What we realistically seek are ‘normal’ relations, “said an Israeli diplomat. “No more and no less.”