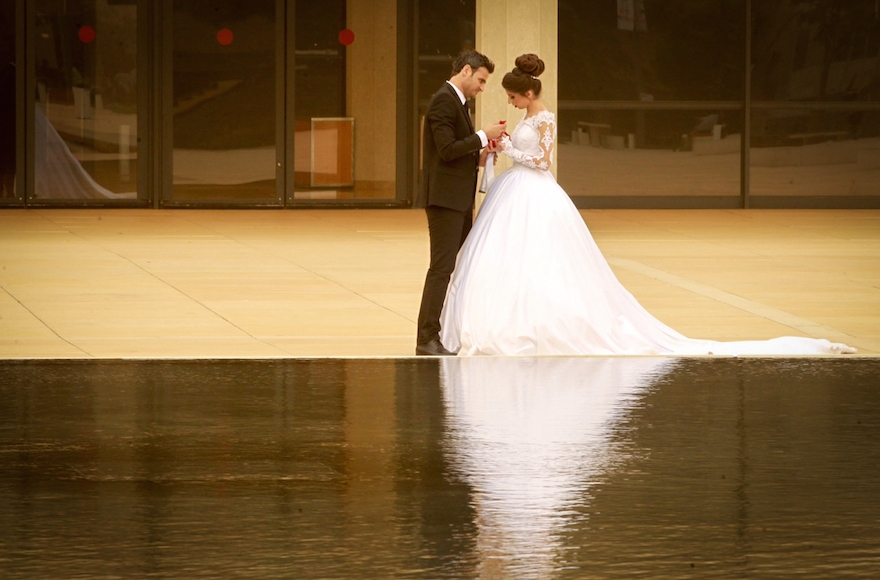 Intermarriage among British Jews in 2011 stood at 26 percent, or roughly half the rate documented among American Jews. (Flash90)
See Original Daily Bulletin From This Date
Advertisement

A detailed study of non-Jewish-born spouses in mixed marriages has confirmed that Jewish men are much more likely to marry non-Jewish women than the reverse and that women are more likely to convert than men.

The study, sponsored by the American Jewish Committee, was released at a press conference here Wednesday. It also found that most non-Jewish-born partners found it easy to integrate into the Jewish community, though few had been exposed to community “outreach” efforts. But they felt that born Jews lacked understanding for the converts’ particular situation.

They based their findings on responses to questionnaires mailed in 1985 to a nationwide sample of born non-Jews married to Jews. Of the 309 respondents, 109 had converted to Judaism and 200 had not. Mayer reported that while 74 percent of the respondents were women, a higher proportion, 86 percent of the women, were converts.

The study found that converts tended to have somewhat more education and higher income than non-converts and appeared to have been more favorably disposed toward Judaism than non-converts. Women were more likely to convert if they considered religious affiliation important to begin with and felt conversion to Judaism would be important to her husband.

About two-thirds of the converts and approximately one-third of the non-converts viewed the Jewish family into which they married as being “very” or “moderately” religious. According to Mayer, “This might imply that many of them were actively encouraged to convert to Judaism by their Jewish families.” Conversely, converts were more likely than non-converts to perceive their own parents as being “not at all” religious or “anti-religious.”

The study found that the Jewish behavior and attitudes of converts resembled born Jews affiliated with Orthodox, Conservative or Reform Judaism in America.