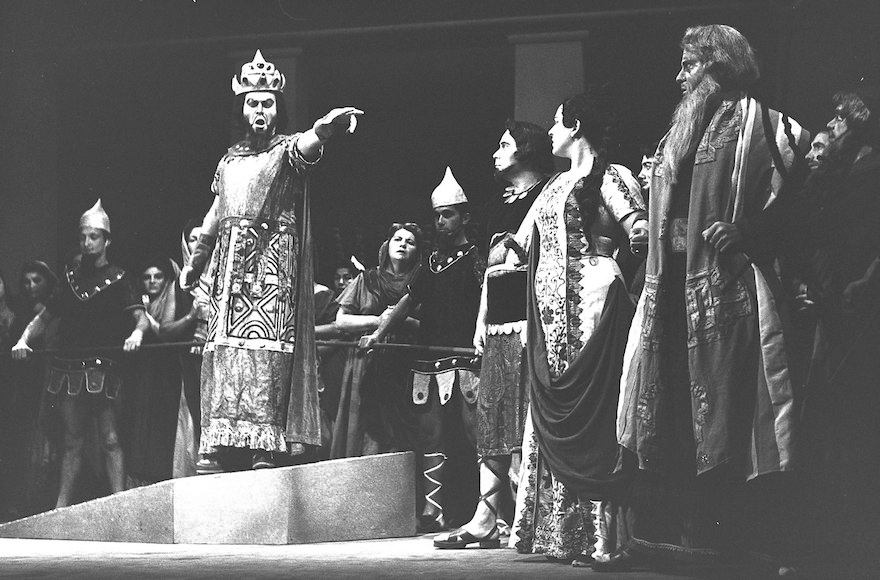 The most lavish and costly project in operatic history, a $11.5 million production of Giuseppe Verdi’s “Nabucco” (Nebuchadnezzar), will be performed a dozen times in Jerusalem next May as the major attraction of Israel’s year-long celebration to mark its 40th anniversary of independence.

First performed in 1842 at La Scala, in Milan, Italy the four-act opera tells the story of Nebuchadnezzar, the Babylonian king who ordered the destruction of Jerusalem in 587 BCE, and the exile of the Jewish people to Babylon.

“The opera will have a magnificent setting at the Sultan’s Pool, known formally as the Hassenfeld Amphitheater, just outside the city’s walls, at a site originally selected by King Herod for Jerusalem’s water supply,” Mayor Teddy Kollek of Jerusalem told a crowded news conference at the Plaza Hotel here Tuesday.

“It was in Jerusalem that the massacre of the Jews took place when the city was overwhelmed by Babylonian forces headed by King Nebuchadnezzar,” Kollek said.

Michael Ecker, president of Opera on Original Site (OOS), a Swiss-based company specializing in staging operas at their original location, is the producer of “Nabucco.” He said at the news conference that 12 performances are planned from May 15-29, 1988 with the possibility of four additional performances through June 2.

According to the producer, the 7,700-seat Sultan’s Pool amphitheater will be transformed to accommodate a tremendous cast, including a chorus of approximately 250 singers (the Pro-Musica Chorus of London) and about 850 non-singing performers.

Italian artistic director Vittorio Rossi, who will direct the production as well as provide settings and costumes, introduced during the news conference Tuesday some of the elaborate costumes he already designed for the show. He said that he decided to get involved with “Nabucco” because the opera’s message is that “victory is truly in the hand of spirituality and peace.”

Moshe Shoshani, head of Israel’s Tourism Ministry in the United States, said he expects close to 70,000 tourists from all over the world to come to Israel to attend the “Nabucco” performances.

Nabucco is produced and organized by Opera on Original Site, in cooperation with the Israel Festival, the Israel Ministry of Tourism and the Association for Promoting Tourism in Israel. Also assisting the project is Operation Independence, an international organization of businessmen dedicated to the support of Israel.