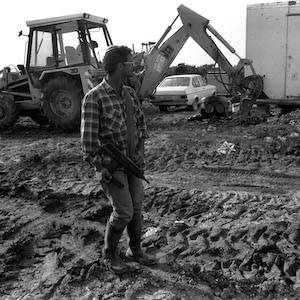 At least one Arab was seriously wounded by gunfire near Petach Tikva Tuesday evening.

The attacks occurred after security sources confirmed they had solved the fatal stabbing of Frederick Rosenfeld, a resident of the West Bank settlement of Ariel, less than 48 hours after his body was discovered Sunday.

Three Arabs from the nearby village of Burkin, who were arrested Tuesday, confessed to the crime and re-enacted it, the sources said. Their homes were promptly demolished.

Rosenfeld, 48, a recent immigrant from the United States, was killed while hiking Saturday in the vicinity of Burkin and Salfit villages.

Later, a 23-year-old settler from the Samaria district fired bursts from an Uzi submachine gun at a group of Arab workers waiting for transportation along Geha Road, outside Petach Tikva.

Two were hit and one was seriously wounded. The assailant was chased and captured by police. His identity was not immediately announced.

At about the same time, large numbers of West Bank settlers congregated a short distance away on Geha Road, pelting passing Arab vehicles with stones.

NO MOTIVES FOR MURDER FOUND

Meanwhile, Gen. Amram Mitzna, head of the Israel Defense Force central command, told reporters that the Arab murder suspects have no terrorist records and apparently had no motive for killing Rosenfeld.

“It was simply a brutal murder which is difficult to explain,” he said. He stressed it was not committed by a terrorist gang.

The suspects were taken into custody Monday night by agents of Shin Bet, Israel’s internal security service. They reportedly told interrogators that they met Rosenfeld Saturday at a spring between Burkin and Salfit, where he was hiking alone.

According to the suspects, they had a friendly conversation, ate with him and at one point allowed Rosenfeld to photograph them.

Then, for inexplicable reasons, one of the villagers snatched Rosenfeld’s knife and stabbed him in the upper back. He was left to bleed to death.

His body was discovered by Arab villagers the next day. They summoned the village leader, who informed the Israeli authorities.