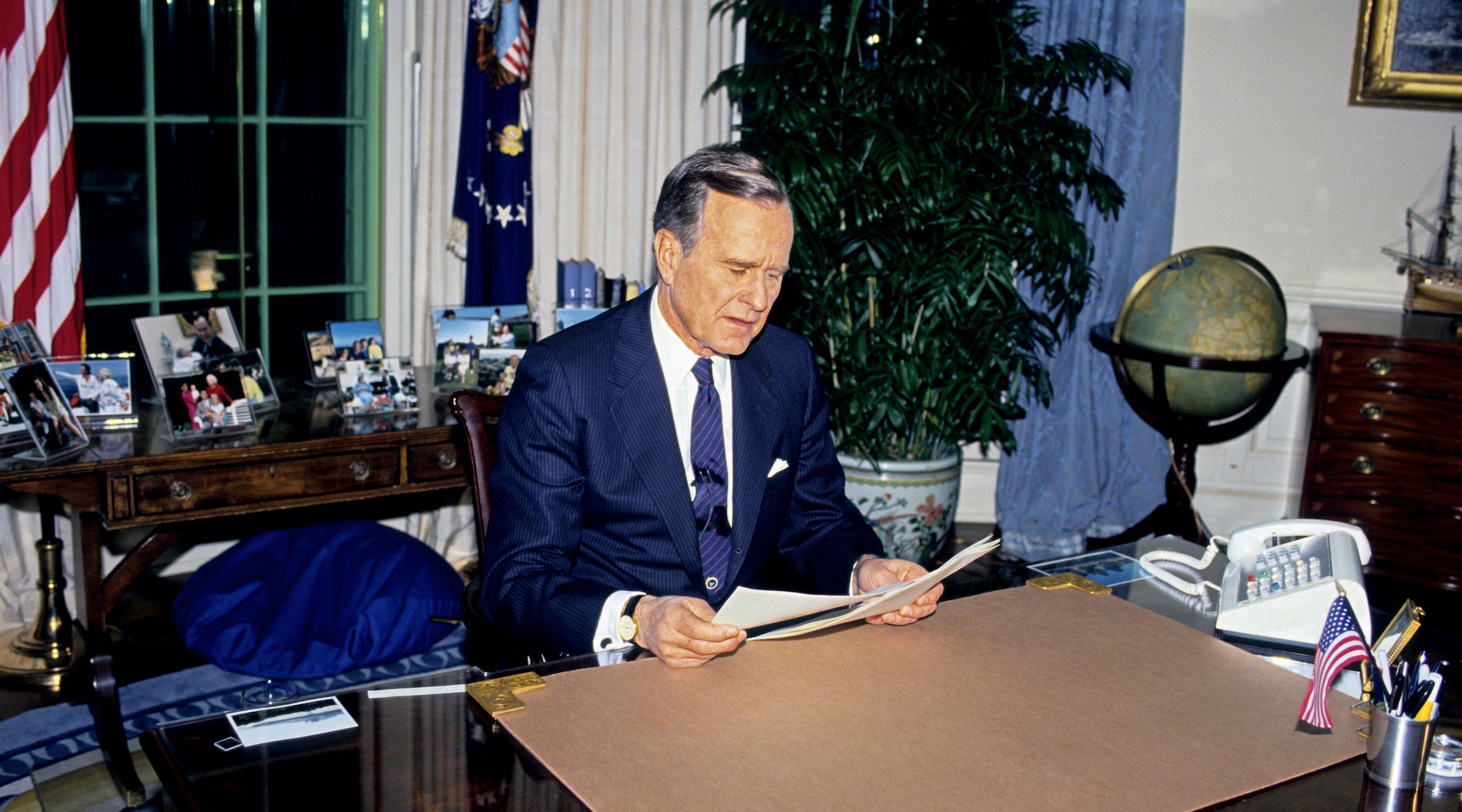 Jewish groups are accepting as a fait accompli a compromise civil rights bill hammered out by the White House and congressional leaders in the wee hours of last Friday morning.

The accord is seen as ending months of standoff between the two branches of government on how to legislatively reverse recent Supreme Court rulings considered by Democrats and many Republicans as restricting the rights of women and minorities to seek redress for discrimination.

“It is going to hit a lick against discrimination in the workplace, and I couldn’t be more happy,” President Bush said Friday.

But some in the Jewish community did not share his enthusiasm.

Sammie Moshenberg, Washington representative of the National Council of Jewish Women, said she is “extremely disappointed.” She said Bush missed a “unique opportunity to provide women with equal remedies.”

The NCJW is not opposing the compromise, “but we’re certainly not supporting it,” said Moshenberg.

Other groups, such as the American Jewish Congress, said that while the compromise is “far from perfect,” it represents “a considerable advance over existing law and should serve as a substantial deterrent” to job discrimination.

Jews who claim to be victims of religious discrimination can receive unlimited damages under past federal court rulings, said Michael Lieberman, Washington counsel of the Anti-Defamation League. He explained that U.S. courts have considered Jews in that situation to be like a racial minority group.

While Bush has opposed unlimited damages as being anti-business, members of Congress had recently stepped up efforts to set no such limits, especially after hearing the allegations of sexual harassment by Anita Hill against Clarence Thomas, who has since been confirmed as an associate justice of the Supreme Court.

Bush had vowed to veto a Democratic version of the civil rights bill, as he did last year. But Sen. John Danforth (R-Mo.) proposed a compromise that won wide support in the Senate on both sides of the aisle.

The administration initially opposed the compromise but ultimately accepted it last Friday after modifications.

The compromise would cap punitive and compensatory damages for sex discrimination at a maximum of $300,000 for companies with 500 or more employees.

While NCJW is opposed to such a cap on damages, Agudath Israel of America is not and generally likes the bill, said David Zwiebel, who is director of government affairs for the group.

But Zwiebel said he is “uncomfortable and nervous” about the compromise bill’s test for proving discrimination, even if such discrimination is unintentional. That test could still result in employees being hired or promoted for affirmative action reasons.

Merit should be the “only relevant criteria” in such decisions, Zwiebel argued.

The Union of Orthodox Jewish Congregations of America said it expects to support the compromise measure. If the compromise is “somewhere between Danforth and the presidential version, I don’t see any problem,” said William Rapfogel, director of the Orthodox Union’s Institute for Public Affairs.

Rapfogel said his group last week had been strongly considering backing Danforth’s bill before it was modified by the White House.

In recent weeks, Bush had criticized the Danforth version as a “quota bill” while center and left-of-center members of Congress accused the president of playing political hardball on the issue of race.

Jess Hordes, ADL’s Washington representative, agreed with Bush that the compromise has “adequate safeguards” to ensure that there will be “no quotas enshrined” in the bill. “This has been accomplished,” said Hordes.

Rapfogel said the fact that a compromise on the issue was struck helps clear the congressional agenda to consider other issues of interest to the Orthodox Union, such as strengthening U.S. laws forbidding compliance with the Arab League boycott of Israel.

The Orthodox Union also wants to see Congress legislatively circumvent a 1990 Supreme Court ruling perceived as making it easier for government to justify laws that incidentally infringe on religious liberties.

Moshenberg said the NCJW will now focus on getting the House to approve, with a veto-proof margin, the Family and Medical Leave Act, a landmark bill that would require firms with 50 or more employees to provide 12 weeks of unpaid leave per year for pregnant workers or for those experiencing a family crisis.

The Senate voted 65-32 a few weeks ago to adopt the bill, which Bush has also threatened to veto for being anti-business.