Vote to Repeal Zionism Measure Expected Next Week at the Latest 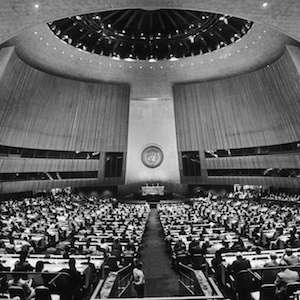 Israeli officials now appear confident they have the votes needed to repeal the 1975 General Assembly resolution denigrating Zionism as racism.

A vote on a proposed repeal measure is expected to take place sometime between Thursday and Dec. 17, when the General Assembly is scheduled to adjourn.

Over 40 countries have agreed to co-sponsor the repeal resolution, according to Malcolm Hoenlein, executive director of the Conference of Presidents of Major American Jewish Organizations, which has mounted a lobbying effort.

Elan Steinberg, executive director of the World Jewish Congress, said that according to his informal count, more than two-thirds of the U.N. member states have agreed to back the repeal.

But counseling “it isn’t over till it’s over,” he warned that the Arab states could still mount a parliamentary maneuver to keep the question from a vote. The Arab group here affirmed its opposition to the repeal in a statement issued here last Thursday.

Spearheading the opposition is Egypt’s foreign minister, who as his country’s longtime U.N. ambassador is adept at procedural maneuvers.

Co-sponsors of the repeal measure planned to meet Monday afternoon to map out the final legislative strategy leading to the vote.

If the repeal process follows the same path as did Resolution 3379 in 1975, the measure would be introduced in the U.N. Social, Humanitarian and Cultural Committee.

The draft resolution simply states that “the General Assembly decides to revoke the determination contained in its Resolution 3379 of 10 December 1975.”

The crucial passage of Resolution 3379 was the determination that “Zionism is form of racism and racial discrimination.”

PERU AND BALTIC STATES BACK MOVE

The committee, which is composed of all U.N. member nations, would presumably take up the resolution Thursday, when it is scheduled to adopt its final report, containing draft resolutions for the General Assembly.

The U.S. decision last week to give a green light to the repeal effort has spurred the flood of nations assuring Jewish groups of their support.

The Peruvian Senate last week voted to instruct its U.N. delegation to support the repeal, joining the legislatures of most of the other Latin American states in the repeal camp. Only Cuba is expected to be on the Arab side.

Lithuanian President Vytautas Landsbergis informed the American Jewish Committee in a letter received Dec. 11 that the Presidium of the country’s Supreme Council has resolved to co-sponsor the repeal initiative. The two other Baltic states, Latvia and Estonia, have similarly indicted their support.

So has the Ukraine, which unlike the Baltic states, had a separate vote in the United Nations even before it declared independence last week.