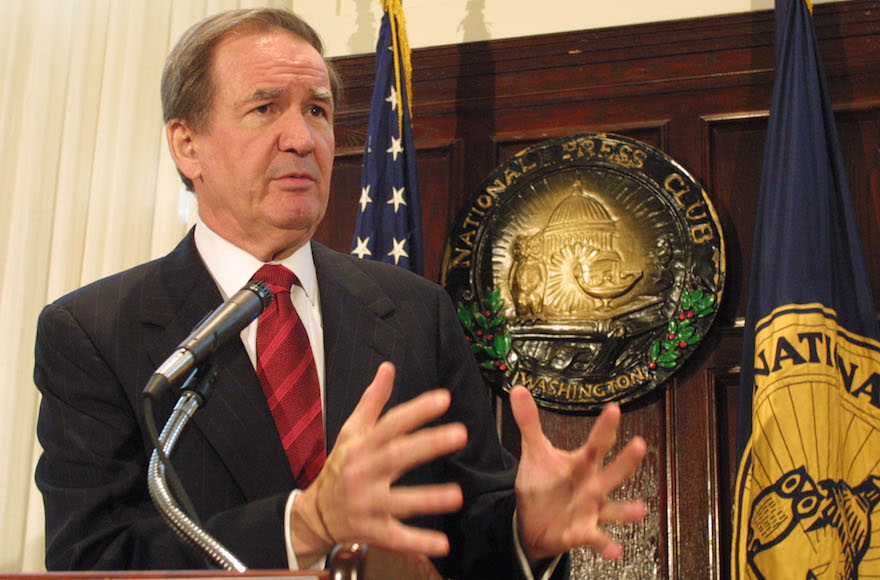 Patrick Buchanan’s strong showing in the New Hampshire presidential primary is raising concern in the Jewish community that his views against Jews and Israel are being legitimized.

Some Jewish organizational leaders are worried that the conservative commentator’s growing popularity could have negative implications for Israel’s bid to obtain U.S. guarantees for billions of dollars in loans needed for immigrant resettlement.

This despite a widespread consensus that New Hampshire Republicans voted for Buchanan to protest President Bush’s economic policies rather than to express agreement with his anti-Israel or isolationist views.

While Bush won the Republican primary Tuesday with 57 percent of the vote, Buchanan’s capture of 41 percent was an astounding setback for a sitting president.

On the Democratic side, the big winners were former Sen. Paul Tsongas of Massachusetts, with 34 percent of the vote, and Arkansas Gov. Bill Clinton, with 26 percent.

During the New Hampshire campaign, those two leading Democrats made the strongest appeals for Jewish votes of any of the candidates, according to Mark Silverberg, executive director of the Jewish Federation of Greater Manchester.

However, the Jewish vote is so small in New Hampshire that poll-takers were unable to report on how Jews voted. Most of the state’s Jews are either Democrats or liberal Republicans, Silverberg said. One of its U.S. senators, Republican Warren Rudman, is Jewish.

In the rest of the Democratic field, Sens. Bob Kerrey of Nebraska and Tom Harkin of Iowa each received about 11 percent of the vote, and former California Gov. Edmund “Jerry” Brown got 9 percent. New York Gov. Mario Cuomo, who was not on the ballot, received only 3 percent despite a strong write-in campaign.

But the major focus in the Jewish community and elsewhere was on the Buchanan showing.

“It means that a large proportion of the population is prepared to support an avowedly anti-Semitic candidate with fascist tendencies for economic reasons,” said Menachem Rosensaft, a New York lawyer and founding chairman of the International Network of Children of Jewish Holocaust Survivors.

Rosensaft said the New Hampshire voters made Buchanan “a credible, legitimate candidate” because they were “prepared to tolerate his racist, abhorrent views.”

“I think the Buchanan phenomenon is the most dangerous manifestation of American anti-Semitism since the Second World War,” he said.

Dershowitz said the primary result shows that “Americans who are not anti-Semites are willing to vote for an anti-Semite if they agree with his policy.”

Both Rosensaft and Dershowitz observed that Adolf Hitler was brought into office in Germany by voters who were not necessarily anti-Jewish but agreed with his economic policy.

Matthew Brooks, executive director of the National Jewish Coalition, a group that seeks Jewish support for Republican candidates, said Buchanan’s showing is a message that the former White House aide is a greater threat to the Jewish community than David Duke, because of his legitimacy.

Duke, a Louisiana state representative who formerly served in the Ku Klux Klan, is also running for president on the Republican ballot in certain states, but he has been widely discredited.

Shoshana Cardin, chairman of the Conference of Presidents of Major American Jewish Organizations, said the New Hampshire primary results “have implications which must be recognized.”

“They show Americans’ serious concerns with domestic issues and reflect a trend which we believe is a dangerous one — one which encourages neo-isolationism and negative feelings toward foreign aid,” she said at a news conference in Jerusalem.

COULD HAVE IMPACT ON FOREIGN AID

Malcolm Hoenlein, the conference’s executive director, said his group’s concern “is that congressmen, senators and others will misread these results and be afraid to take the stand that is necessary because of fear of what they will face at home from their voters. And that could affect the loan guarantees, and foreign aid in general.”

Morris Amitay, a pro-Israel lobbyist and longtime observer of the political scene, was less concerned about the implications of Buchanan’s ascendancy, pointing out that Israel was not even a minor issue in the New Hampshire primary.

He also argued, “Anything that gives Bush something else to worry about other than settlements on the West Bank is good for our side.”

Steve Gutow, executive director, of the National Jewish Democratic Council, said, “I think the Republican party is going to have to stand the burden of how so many of its people support a man like Pat Buchanan.”

Gutow pointed out that the Democratic Party in the 1984 and 1988 elections had to respond to charges about the anti-Israel views of the Rev. Jesse Jackson, although neither its nominees nor the party platforms supported those views.

There are about 7,000 Jews in the Granite State, about 0.6 percent of the populations. Some 3,000 Jews live in the Greater Manchester area.

Clinton spoke of his support for Israel, including its request for loan guarantees, in a speech at Temple Beth Jacob in Concord. Bush visited a Reform temple in Manchester, but did not make a speech there.

Tsongas was also in favor of the loan guarantee and brought material to the federation office documenting his pro-Israel record, which he asked be distributed.

(JTA correspondent Michele Chabin in Jerusalem contributed to this report.)