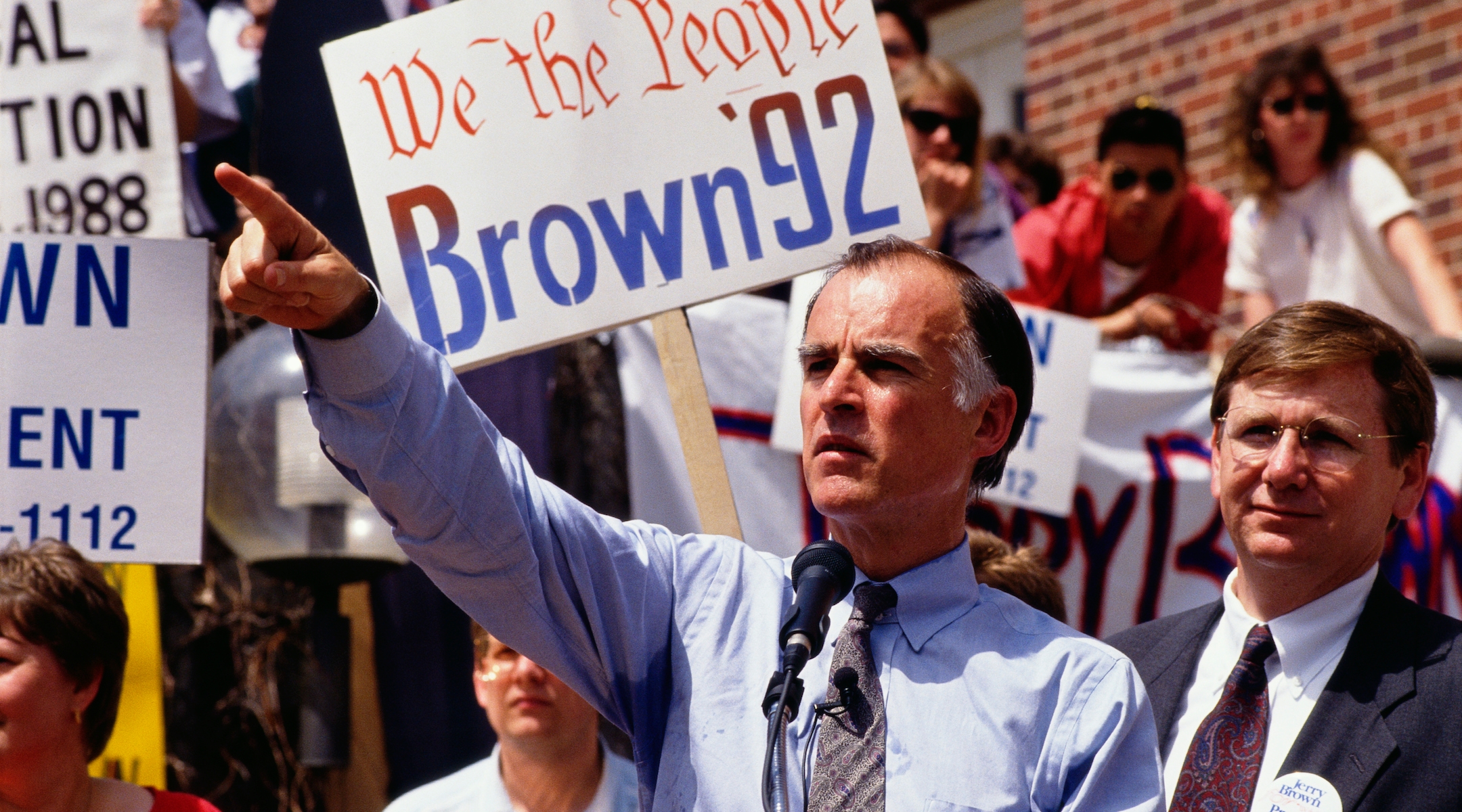 Hisses and hecklers greeted Democratic presidential candidate Jerry Brown on Thursday when he defended his choice of Jesse Jackson as a potential running mate during his first address to a Jewish audience here in advance of Tuesday’s New York state primary.

Speaking at a forum sponsored by the local Jewish Community Relations Council, Brown said he picked the African-American politician — who has not yet agreed — because the nation’s “No. I priority must be healing the divisions between black and white.”

While Hikind, a Brooklyn Democrat who identifies as a supporter of the late Meir Kahane, was eventually ejected from the room, the hisses from members of the audience indicated he was not the only one who could not forgive Jackson.

Jackson apologized to Jews in 1984 after referring to New York as “Hymietown.”

The controversy was resurrected during the particularly bitter 1988 New York primary, when then-Mayor Ed Koch, a supporter of Sen. Albert Gore, said Jews “had to be crazy” to vote for Jackson, who also was running for president.

These remarks were resurrected this week in a boxed, front-page article in Brooklyn’s Jewish Press tabloid.

During Brown’s tumultuous appearance before the JCRC audience, veteran Zionist leader Charlotte Jacobson tried to clarify that the American Jewish community is “not opposed to a black vice president,” but thinks that Jackson is not a wise choice. Her remarks received sustained applause.

But Brown defended his choice of Jackson, saying that the leader of the African-American community needed to be included, representing 25 percent of the voters.

“The Jewish community and the African-American community are the pillars of the Democratic Party,” he said. “The party is being ripped apart, the way the country is.”

“This rift in the room — which I could have predicted — that is the barrier,” he said.

The anti-Jackson outbursts dismayed activists in the room supporting the candidacy of Arkansas in black-Jewish tensions could solidify black voters behind Brown — and cripple Clinton in this crucial primary.

Suggesting that the Republicans might be orchestrating dirty tricks, Luchins charged that “CREEP is back, and Hikind carries their water,” referring to Richard Nixon’s Committee to Reelect the President, notorious for its Watergate dirty tricks.

Unlike Clinton, who on Tuesday listened patiently as members of a larger JCRC audience lectured him in defense of the Israeli government’s settlement policy, Brown hammered his point home to the less-than-receptive audience.

“Look folks, we are facing a potential unraveling of the social fabric,” he said.

He said the result of conditions in the black community — where he said the leading cause of death of children under 4 is AIDS — is “hatred, bigotry and, yes, rising anti-Semitism. We have got to deal with it.”

He called for a commitment to social justice.

“We’re entering a pre-Weimar situation,” he said, referring to the precarious German democratic regime that brought the Nazis to power.

Brown apologized for remarks at an earlier Wall Street appearance, which one questioner criticized as “classic anti-Semitism.”

In those remarks, Brown assailed Clinton’s financial backing, saying he wanted to “drive the money-changers from the Temple.” He then began reading from a list of investment bankers backing Clinton — and many of the names were Jewish.

“I want to disassociate myself from any implications,” he said. “The money comes from people of all backgrounds.”

He said he had stopped reading the list when he realized its implication.

MANY UNCOMFORTABLE WITH CLINTON

Brown also said that his proposed plans to reform the American political system would not hurt the Jewish community’s political efforts for Israel, even though it would eliminate the network of political action committees the community has wielded in recent years.

Just because the means would be eliminated does not mean the goal would suffer, he said.

Rabbi-Israel Miller, a former chairman of the Conference of Presidents of Major American Jewish Organizations, said Brown does not have a chance, “certainly not in the organized Jewish community.

“I think the Jesse Jackson issue is an albatross,” he said.

But an official at one Jewish organization, who asked not to be identified, said that while she supports Clinton, she believes Brown will get votes in the Jewish community.

“Nobody feels comfortable with Clinton. They’re concerned he isn’t truly that strongly in favor of Israel,” she said. Instead, she said, many members of her Modern Orthodox community plan to vote for Brown, in the hope of sending the choice of Democratic nominee to a brokered convention this summer.