Clinton Attacks Bush on Israel and Opposes a Palestinian State 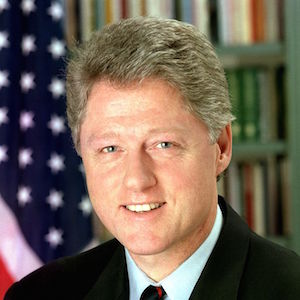 Arkansas Gov. Bill Clinton pledged this week that if elected president, he would oppose the creation of an independent Palestinian state and launch a joint high-technology development program with Israel.

The expected Democratic nominee also attacked President Bush’s “relentless pressure on Israel,” protesting that “this is no way to treat a steady friend and consistent ally.

“As president,” he promised, “I will put an end to this.”

The governor delivered his remarks Tuesday in a bicoastal talk to the newly formed Clinton National Jewish Leadership Council. Clinton appeared in person at a meeting of the group in Washington, and his words were transmitted via satellite hookup to a similar gathering in Los Angeles.

Clinton appeared upbeat on a day that saw him leading independent candidate Ross Perot and President Bush in the polls for the first time.

In his talk, frequently punctuated by the applause of the partisan audience, Clinton stressed nine points of his Middle East platform:

*Provide loan guarantees and other aid to Israel to assist in the ingathering and absorption of Jewish immigrants from the former Soviet Union. “The dream must not be deferred,” he said.

* Advance the peace process, but without Washington predetermining the outcome or imposing conditions.

* Create a U.S.-Israel high-technology commission for the 21st century, to help apply “the genius of Israel’s people.”

* Ensure that any peace settlement guarantees the security of Israel’s boundaries.

* No support for “dangerous, despotic regimes,” such as Iraq and Syria.

* Enhanced logistical cooperation with Israel and assurances that Israel will retain its qualitative military edge.

* Completion of the Arrow missile defense program, based on American-Israeli cooperation.

But during a question-and-answer period linking Washington and Los Angeles, Clinton hedged when asked if he would move the U.S. Embassy from Tel Aviv to Jerusalem.

“Not if it would affect the peace process,” he answered. “Timing is crucial, and nothing should be done that might destabilize the process.”

The Arkansas Democrat warmly praised Israel’s commitment to democracy, as shown in the recent elections, and said he looked forward to working with Yitzhak Rabin as the likely prime minister.

In response to another question, Clinton said he would support any changes proposed by the new Israeli government to streamline the country’s economy and make it more competitive.

Clinton responded cautiously when asked if he would “undo the injustice” to Jonathan Pollard, the former U.S. naval intelligence analyst serving a life prison sentence for passing classified information to Israel.

“In good conscience, I cannot commit myself, but I will review the case in good faith,” he replied.

He also predicted that Bush would make some pro-Israel gestures in the near future and “try in four weeks to make you forget what he has done in the last four years.”

On a lighter note, Clinton said that he was thinking of writing a book about his campaign against Perot and Bush, and would title it, “The Billionaire, the Millionaire and Me.”