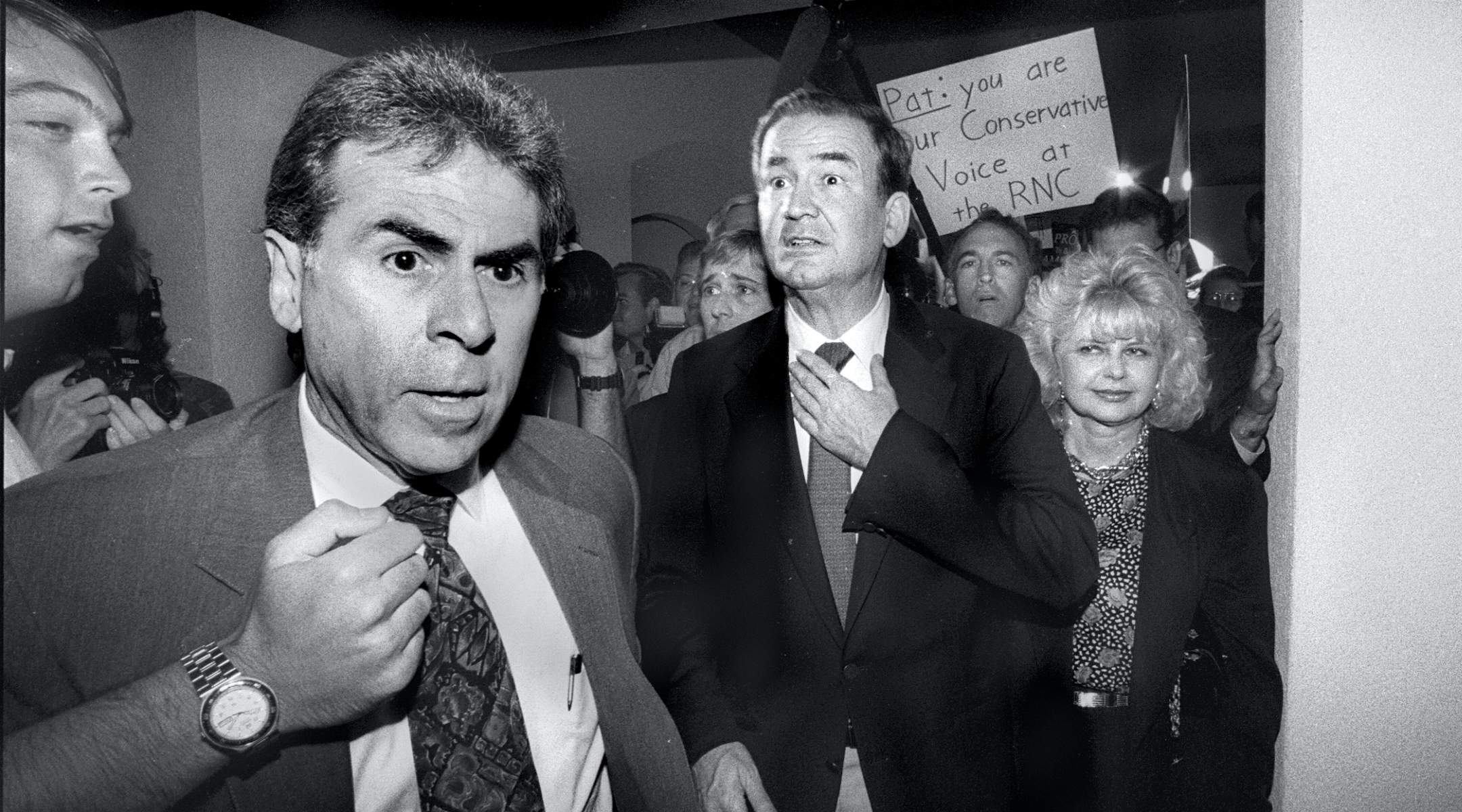 Jewish activists here this week reacted with distaste and discomfort to the conservative call to arms delivered by Patrick Buchanan in a speech at the Republican National Convention Kickoff Monday night.

Some were angered that the former presidential candidate, who has characterized the campaign as a holy war, was given the podium during prime time, just prior to the address by former President Ronald Reagan.

But many accepted the political calculus that Buchanan was needed to woo and solidify George Bush’s right-wing base.

Several likened his inclusion, despite his acknowledged extremism, to the Democrats’ obligation to allow Jerry Brown to address their convention in New York last month. They also compared it to the Democrats’ efforts to strike a balance with the Rev. Jesse Jackson and his left-wing constituency.

But most seemed sanguine that, while Buchanan might have an important party base, he would be curbed in any effort to rise higher by other, more moderate and popular conservatives such as Housing and Urban Development Secretary Jack Kemp.

“I was appalled that he was permitted to speak — he is a hatemonger,” said Sylvia Steiner, whose husband, David, is president of the non-partisan American Israel Public Affairs Committee. “A lot of Jewish Republicans will be very unhappy if he plays a role in the party,” she said.

“Giving him a platform was a perfunctory gesture on behalf of the Republicans, and it was correct ; he has a certain following,” said a prominent Jewish Republican activist from Los Angeles, who asked that his name not be printed.

But the activist said Jews have no reason to feel threatened. Buchanan will “never be in a position to lead the party,” he said.

“It was helpful to the election (effort) of George Bush to let him come home to the party,” said another prominent Jewish Republican. “But he’s basically a street fighter, and his mean-spirited face showed through.”

Buchanan, who won 37 percent of the vote in the New Hampshire primary and averaged roughly 30 percent in the subsequent primaries in which he ran this year, is a self-described general in a war to protect America’s white and Christian values, which, he feels, are threatened.

He has been labeled an anti-Semite by the likes of even conservative publisher. William Buckley for writings that offer selective praise of Adolf Hitler, sympathy for the Holocaust revisionists and acerbic attacks on the pro-Israel lobby.

In his speech before the convention, Buchanan characterized the campaign as a “religious war going on in our country for the soul of America.”

He attacked the Democrats’ support for abortion rights and gay rights, as well as their opposition to public funding for private and parochial schools by calling it a deviation from the “Judeo-Christian values upon which this nation was built.”

“It is not the kind of change we can abide in a nation we still call God’s country,” he said.

Buchanan closed his speech with an anecdote about two young male army troopers who went into a Los Angeles neighborhood during the April riots to confront the mobs, “M-16s at the ready.”

The mob retreated after it met “the one thing that could stop it: force, rooted in justice, backed by courage.”

‘SCARY’ BECAUSE OF ITS EXCLUSIVITY

But he said that he found the speech “scary” because of its theme of exclusivity, particularly regarding homosexuals. “But he did mention Jews twice without stumbling,” he added.

One mention was not part of the prepared text, however. In reference to the Democrats’ opposition to public funding for religious schools, the original speech cited discrimination against “Christian schools” and “Catholic schools.”Only during the delivery did Buchanan add, “Jewish schools.”

Hier, who has debated Buchanan several times on the television show “Crossfire,” said he was confident that the rise of Buchanan in the party would be checked by the popularity of HUD Secretary Kemp, a former New York congressman.

He also made a point of nothing his discomfort with the inclusion of Jackson as a speaker at last month’s Democratic convention.

“Buchanan’s vision of America is at odds with the Jewish perspective of America and its strengths, built upon diversity, pluralism and inclusiveness,” said Jess Hordes, Washington representative of the Anti-Defamation League, who was in Houston for the week.

“It is clear there was a political calculation to include him as a means to secure the conservative base. But he also carries high negatives, and not just with Jews,” Hordes said.

“Pat Buchanan was an announced and legitimate presidential candidate,” he said. “Just like the Democrats had an obligation to allow Jerry Brown to speak at their convention, (the Republicans) had an obligation to let him speak. He earned the right through his campaign.

‘NO HOME WITHIN THE REPUBLICAN PARTY’

“There is nobody who can doubt the strong public commitment this party made in opposing Pat Buchanan,” Brooks continued. “We’ve condemned his message and said it has no home within the Republican Party.”

But despite this effort to distance the party from Buchanan, word had it in Houston that the conservative commentator would be encouraged to use his message to rally his troops for Bush during this campaign.

Brooks insisted the GOP was more adept than the Democrats at handling what he called “pariahs” within the party. “Look at Jesse Jackson,” he said. “He was not a presidential candidate and had no delegates. But the Democrats reached out and asked him to participate” and then “gave him prime time exposure.”

He added: “Nobody is going to have any (memory) of Pat Buchanan or what he said or even that he spoke, in a couple of days.”