Yiddish Makes a Comeback with Help from Some Friends 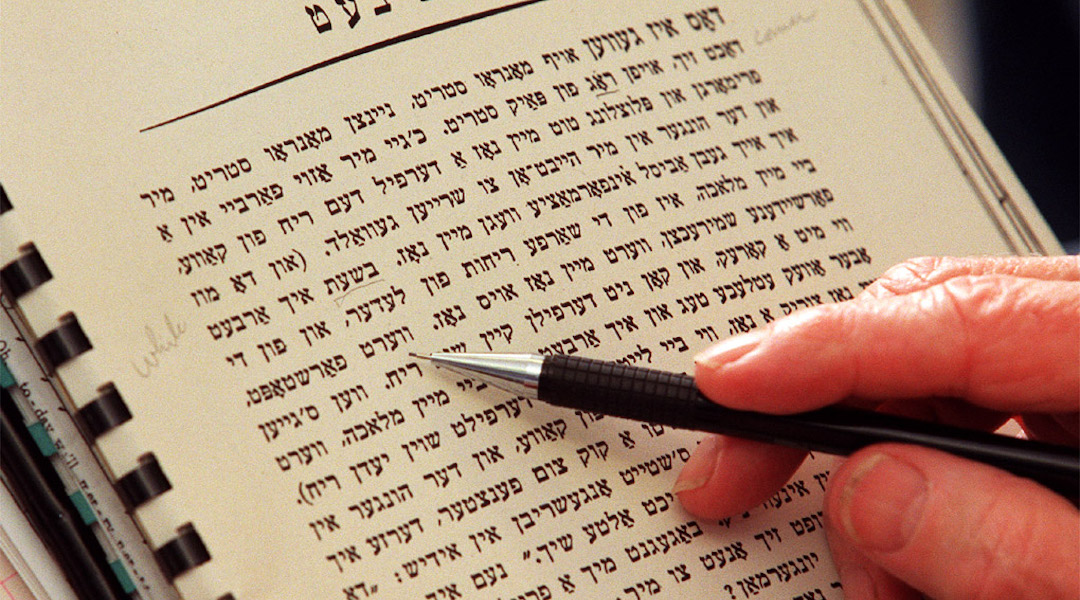 A Yiddish summer language institute had to turn away applicants for lack of space. National Public Radio will broadcast Yiddish stories narrated by Hollywood actors such as Leonard Nimoy and Carol Kane.

And thanks to actor Mike Meyers’ Barbra Streisand-worshiping character Linda Richmond on “Saturday Night Live,” thousands of gentiles can express themselves as feeling “farklempt” (choked-up).

As the last generation of immigrant Yiddish speakers passes away, it has long been predicted that the use of Yiddish would disappear with them. While specialists have been predicting the decline of Yiddish for some years, groups around the country aredetermined not to allow it to the brink of extinction.

The language in which parents could converse secretively in front of their children is enjoying a resurgence among everyone from university students to feminists to television sitcom characters.

“The number of Yiddish speakers in the world is actually rising,” said Aaron Lansky, president of the National Yiddish Book Center, in South Hadley, Mass, Lansky said that with the high birthrate of Chasidim, who use Yiddish as their everyday language, new generations are still being raised in the mother tongue, the “mammeloschen.”

But the insular Chasidic community is not interested in modern Yiddish literature because of its secular themes.

“The first modern Yiddish story appeared in 1846,” said Lansky, whose study of Jewish history sparked his interest in Yiddish as an undergraduate.

Lansky, along with the National Yiddish Book Center, which he founded, is responsible for rescuing more than 1 million Yiddish books from being destroyed.

“Until the Nazi era, 45,000 Yiddish titles appeared. And most addressed a theme that American Jews are still concerned with, mainly how does the Jew fit into the modern world?” Lansky said in an interview.

ASSIMILATION A SOLUTION FOR IMMIGRANTS

Assimilation was the solution for many immigrants, Holocaust survivors among them, who wanted to begin their lives anew. And the desire to cast away anything associated with their past was part of that process.

Yiddish was one of the first casualties.

“Jews began to recoil from their world, which was destroyed,” said Lansky. “But now that initial trauma has passed.”

It was a desire to learn about the Jewish world before the Holocaust that guided writer and feminist activist Irena Klepfisz to Yiddish.

Klepfisz, a child survivor of the Holocaust, was raised in the Yiddish-speaking world of the Bund labor movement in Poland. She has taught Yiddish classes at various American universities as well as Jewish women’s studies courses.

According to Klepfisz, although much scholarship focuses on the Holocaust, little of it delves into the Jewish world that existed before.

“I wanted to reconnect with my Yiddish background,” said Klepfisz, who is a poet and author of “A Few Words In The Mother Tongue,” a poetry anthology, and “Dreams of an Insomniac,” a book of “Jewish feminist essays, speeches and diatribes.”

“It was such a vibrant community, with so much happening, and I was interested in learning more about the women activists who played such a prominent role in the Bund and its organization,” Klepfisz said.

Klepfisz is currently working in conjunction with the National Council of Jewish Women to organize a conference on women and Yiddish. The conference is scheduled for October.

The YIVO Institute for Jewish Research’s Uriel Weinreich Program in Yiddish Language, Literature and Culture offers a six-week summer program at Columbia University, in which students immerse themselves in Yiddish through language classes, lectures and film.

College students are a group among which Yiddish culture seems to be maintaining a high level of interest. An estimated 30 universities across the United States offer Yiddish courses.

Janet Hadda, Yiddish professor at the University of California, Los Angeles, said that while the numbers of students studying the language has decreased in the past few years, enrollment is up in her Yiddish literature in translation classes.

Hadda added that the number of non-Jewish students enrolled in her Yiddish literature classes was also increasing.

Carol Stein of Eugene, Ore., said it was her daughter’s study of Yiddish in college that inspired her to organize a Yiddish-speaking group through her synagogue. It meets twice a month.

While facilitating the group comes easy for Stein, a middle-school teacher and librarian, she herself does not understand very much. Yet she is committed to keeping the language alive.

“It is amazing to me, how once you get involved in something like this, how many Yiddish speakers come out of the woodwork,” said Stein.

“There are rich little veins of Yiddish, in the most obscure places. There is even a Yiddish radio program in Portland. (Ore.)” she said.

Such study groups are prompting a curiosity in people who have no knowledge of Yiddish beyond the few requisite phrases learned from family members, or inevitably, from television.

“Yiddish has always been present in Hollywood, just because of the large numbers of Jews there,” said Lansky. Now, he said, it is increasing as “Jews are more self-affirming.”

But Klepfisz does not see such commercial usage as positive. “It is a real denigration of the language. It is becoming a T.V. language, associated only with comedy, or schmaltz,” she said. Said Lansky, “Making Yiddish accessible to people who are not Yiddish speakers in one of our aims.”

The book center’s new home, on the campus of Hampsire College in Amherst, Mass., is scheduled for completion in 1996. It will feature interactive exhibits and programs designed to make Yiddish more available to the center’s visitors.

“I’m under no illusion that Yiddish will once again become a spoken language among Jews,” said Lansky. “I’m not trying to revive the past, just to make it more accessible.”