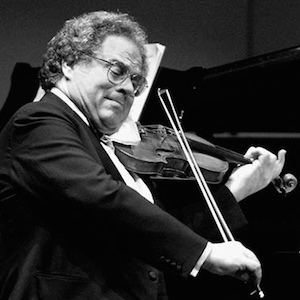 Growing up in Israel, violinist Itzhak Perlman was never able to visit many of the country’s most important historical and religious sites.

Like thousands of other disabled Israelis and tourists, Perlman, who walks with the aid of braces and crutches as a result of a childhood bout with polio, had been forced to sit on the sidelines while family and friends explored the Old City of Jerusalem and the Western Wall tunnels.

But recently, Perlman, a vocal advocate of equal access for the disabled, finally got his chance. On March 23, Perlman joined dozens of young disabled Israelis at a ceremony inaugurating the Tunnel Access Project.

The project was initiated by the American Jewish Joint Distribution Committee, in cooperation with the Ministry of Religious Affairs and the Western Wall Heritage Foundation. A substantial part of the funding came from Larry and Leonore Zusman of Dayton, Ohio.

Sitting in a borrowed wheelchair, the violinist toured the damp, narrow caverns under the Western Wall with the assistance of newly built ramps and elevators.

Off-limits to Jews until Israel liberated the Old City in 1967, the tunnels’ 2,400 square yards of rooms and public halls include a section of the Second Temple and a Hasmonean water tunnel.

The tunnel renovations constitute the first step in an ambitious project that will render many parts of the Old City accessible to all disabled visitors, including those with visual and hearing impairments.

Within a year, the route is expected to include such sites as the Cardo – a Roman street now filled with modern shops – the Burnt House Museum, the Herodian Palaces and the Sephardic Synagogues.

In parallel projects, the Yad Vashem Holocaust Memorial and the Tel Dan and Hula nature reserves are also in the process of being made accessible to the disabled.

Perlman’s wife Toby, who accompanied her husband on the tunnel tour, reflected on the difficulties faced by people with mobility problems. “It’s very difficult to travel, I can tell you. An ordinary curb or sidewalk can become a monumental obstacle. For someone in a wheelchair, an uneven stone floor can seem like a mountain.”

Though he was full of praise for the tunnel renovation, Itzhak Perlman agreed that “simpler renovations are equally important. Curb cuts in Tel Aviv and other cities would be real progress,” he told the Jewish Telegraphic Agency.

Asked how Israel rates, compared to other countries, in the field of accessibility for the disabled, Perlman said, “We are not No. 1, believe me.”

Among the barriers, he said, are buildings without ramps and elevators, few parking spaces for the disabled and a general lack of awareness of disabled peoples’ needs on the part of Israelis.

“In the past, we have had so many other things going on here. That’s not an excuse, just an explanation,” Perlman said.

Gazing around him at the 50 wheelchair-bound young adults who had accompanied him through the tunnels, Perlman said, “This project and other like it prove that there is definitely more awareness now than there had been. Now we have to turn awareness into even greater action.”

Miki Solarge, a 30-year-old Jerusalemite, called the tunnel renovations “wonderful but long overdue.” Solarge, who uses a wheelchair, said that although she has visited the Kotel many times, “going through the tunnels seemed like an impossible dream.”

Israelis, she said, “have a lot to learn about the problems of the disabled. The buses aren’t accessible. There are very few ramps for sidewalks and buildings. Some of the movie theaters have several stairs. There are laws that require buildings to be handicapped-accessible, but the reality is very different,” she said.

Even so, Solarge said that she fights these obstacles, tooth and nail. “If I want to ride on a bus, I ask people to help me on and off. If the bus driver yells at me, I yell back.”

Solarge realized her life-long dream of visiting Masada, the ancient fortress atop a mountain south of Jerusalem, while serving as a volunteer in the army. “I didn’t want to take the cable car, like old people tend to do. I wanted to go up the Snake Path (a steep, narrow dirt path leading to the top of the mountain) like other people my age.

“At the end of my 2 1/2 years of army service, the soldiers in my unit asked if they could do something special for me. I asked them to take me up the Snake Path, and they carried me on a stretcher, before sunrise.”

One day, Solarge would like to “climb” the Snake Path again, this time on her own steam. “If these tunnels can be made accessible to the disabled,” she said, “why not the Snake Path up Masada?”