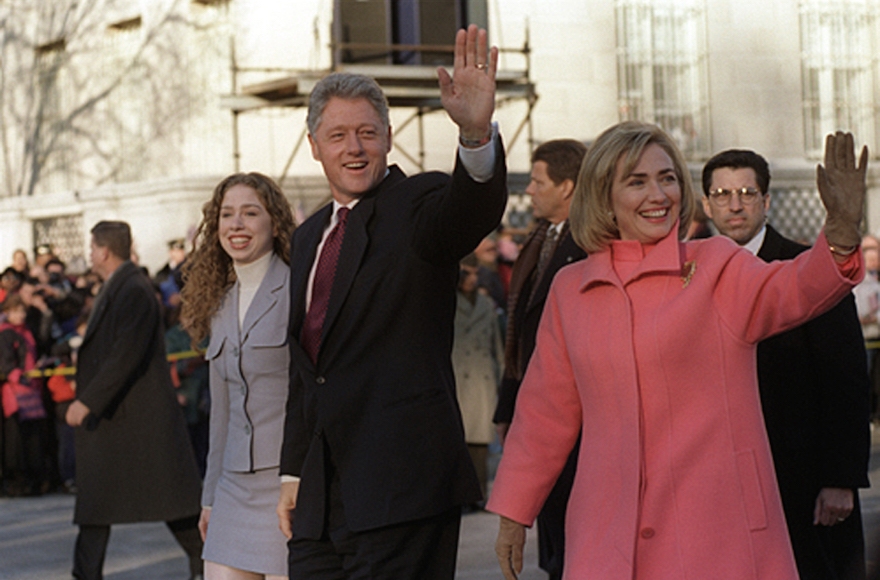 The President, First Lady, and Chelsea on parade down Pennsylvannia Avenue on Inauguration day.
See Original Daily Bulletin From This Date
Advertisement

Hours after the terrorist bombing attack in Israel that left at least 19 dead, Hillary Rodham Clinton repeated the words her husband spoke at the signing of the peace treaty last summer between Israel and Jordan.

“The enemies of peace cannot, will not and must not succeed,” she said, denouncing the attack but calling for the peace process to continue.

The bombing cast a pall over the launch of the 1995 Israel Bonds campaign, at which the first lady gave the keynote address Sunday night.

In her speech, Clinton drew parallels between Israel and the United States and between Jewish and U.S. history.

She referred to Israeli Prime Minister Yitzhak Rabin, who said that how Israel handled the challenges of the peace process would determine what kind of people Israelis would become.

Of the American people, Clinton said: “How we handle the challenges we confront speaks to who we are and what we will become as well.

“We don’t face the same kind of challenges that Israel does on a daily basis,” she also said, “but we have to decide whether we go forward or backward as a nation.”

The United States needs to build up its families and communities, and could turn to Jewish teachers and scholars such as Hillel and Martin Buber for guidance, the first lady said.

“These scholars show us how to dialogue, discuss and learn, and how central family culture and community are,” she said, “I wish we could clone this and make it available to all people.”

In starting her vision of the future, Clinton called for a United States where people had opportunity and were responsible for their actions.

For example, she said, “A tax cut should be tied to whether or not people invest in the future, in education, in homes, in putting away money for future medical expenses.” She also stressed that President Clinton did not support an across-the-board tax cut that would “just be a couple of hundred dollars in people’s pockets.”

She likened investment in endeavors such as education and homes to the investment that Israel Bonds made in Israel’s future.

In the keynote address, the first lady also called the violence in American streets “our own type of terrorism.” The audience applauded when she noted that Bill Clinton was the first president to stand up to the National Rifle Association.

The first lady said Israel was a beacon of hope and inspiration to people around the world, and she asked the 700 Jewish leaders at the reception to help the United States to continue being a beacon of light.