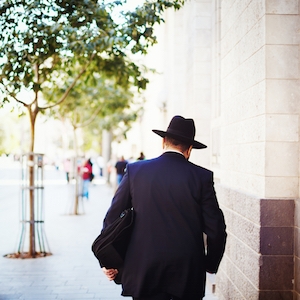 Chaim is 32 and every Orthodox Jewish mother’s dream: successful in a prestigious profession, committed to observance and nice-looking.

He dodges the questions of his family members who wonder why he’s not yet married. Until very recently, he occasionally dated women.

No one in his professional or personal life suspects the truth, says Chaim, who is gay. Like everyone else interviewed for this article, he asked that his real name not be used.

“The yarmulka is the greatest cover on earth,” he said. “People think I’m the perfect Jewish boy.”

Chaim is part of a new group called the Gay and Lesbian Yeshiva/Day School Alumni Association, which was formed recently by homosexual Orthodox Jews who say that their sexual orientation is undeniable and their observance steadfast.

It is apparently the first time that Orthodox gay and lesbian Jews have organized as a group.

Their goal is to create a sense of community and to try to bridge the chasm that has divided the contradictory worlds in which they live.

After four monthly meetings at Manhattan’s Gay and Lesbian Community Center, the association has 75 members. Organizers say this represents ‘”just the tip of the iceberg.”

The group’s members were raised in strictly Orthodox homes, spanning the range of affiliations from centrist to fervently Orthodox.

Many come from particularly prominent families, say the organizers, with fathers and uncles who are leading rabbis and lay leaders of synagogues and communal organizations. They are graduates of well-known yeshivas and day schools. Some are ordained rabbis.

Although only about 10 percent of its members are female, the group’s organizers said they hope that eventually they will attract enough women to meetings so that the membership will be equally split between the sexes.

Typically, when an Orthodox Jew realizes that he or she is gay, they feel ostracized by their community and that they must leave observance altogether. Today, however, some want to be able to integrate both parts of their identity.

The new group has been formed, said Moshe, who is one of its organizers, because “I could no more give up being an observant Jew than I could give up being gay.”

Moshe is 25, a member of a Young Israel synagogue in the New York area, works in commercial real estate and, like everyone else interviewed, asked that his real name not be used.

The group’s primary purpose is to create “a safe place” and “sense of community” for gay and lesbian Orthodox Jews, according to Moshe.

“We are raised in insular communities and our lives are mapped out for us,” he said.

“We’re told `If you follow the rules everything will be fine.’ But then we realize that we can’t follow the rules and suddenly, we have no rules to follow. The community we grew up with threw us out and we don’t know where to turn,” he said.

The group is considering several other goals. Leaders expect to conduct a session about the issues specific to being gay and Orthodox at the International Conference of Gay and and Lesbian Jews, which will take place in July in New York.

Some members want the group to become an educational resource for day schools and yeshivas and an organization that can help gay and lesbian Orthodox teens who feel isolated.

The group is holding a party to raise money for a 24-hour voice-mail service so that those who feel isolated have a place to turn.

David, another of the group’s organizers, hopes to convene a group of experts in halachah, or Jewish law, who can “scour the literature and develop a case with a more favorable view” of homosexuality.

“It may not make a difference to the Orthodox community but it will in our lives,” he said.

Orthodox Judaism holds that, according to the Torah, homosexuality is an abomination. Sexual relations between men can be punishable by death.

Rabbi Steven Dworken, executive vice president of the Rabbinical Council of America, a mainstream Orthodox group, said “these people can’t have it both ways.

“They are saying that their [sexual] orientation is something they can do nothing about and saying that they want to be observant to Torah and still engage in behavior which is abhorrent to Orthodoxy,” said Dworken.

Although the news may be difficult for any parent who has long cherished the idea that their child will grow up to find happiness in marriage and parenthood, for people in the Orthodox world it is much more so.

“My parents feel really isolated with this” said one lesbian member of the new group.

The stigma of having a gay or lesbian child is considered a blot on the entire family, making them the focus of community gossip and derailing the efforts of siblings who want to marry someone from within the same circles, said those interviewed.

For some, the religious and social dictates against homosexuality in the Orthodox community are so strong that they spend years trying to quell their impulses and “go straight.”

“I though if I found the right girl it would convert me. I thought it would be enough” to stop feeling attracted to men, said Chaim.

“My whole life I thought I’d get married at 21 and start having kids at 23,” he said, wistfully. “A part of me still wants those things.”

Several men interviewed who have “come out” to their parents and the rebbes who have guided their studies and personal decisions for years said they were urged to get married despite their homosexuality.

David said that when he turned to his rebbe for guidance and told him he was gay, “he urged me to get married and take care of my `urge’ on the side.”

He said he had a friend from the group whose own rebbe urged the same thing and told his young student that he had a list of women who would be willing to marry him despite his homosexuality.

That is, in fact, what many gay Orthodox jews do.

Ted is 34, married, the father of six children and lives in a New York suburb with a large religious community.

He came out to his wife when she was pregnant with their fourth child.

Though he knew he was gay long before that, his desire for “a normal life,” as he puts it, led him to try and put it out of his mind. “I wanted to get married to have the closeness. I didn’t want to be alone, and wanted a family, a Jewish home,” said Ted, who says that his wife also wants to stay together.

“I try to minimize what I do that may be what I shouldn’t. When it comes to spilling seed, those times are few and far between. I try very hard not to do it because it’s a transgression,” he said. “It makes what I’s doing not seem as bad.”

The core of his gay life these days, said Ted, is going to gay bars with a friend who is also Orthodox, gay, married and a father. There, they are able to relax and talk about their lives, and meet other men for quick sexual encounters.

Ted says he has the life he wants, centered around his children.

And if anyone ever questions him about his sexuality, he said, being gay in his community “is easy to deny.”