On the Election Trail: Jewish Backers Tout Dole As the ‘Man of the Moment’ 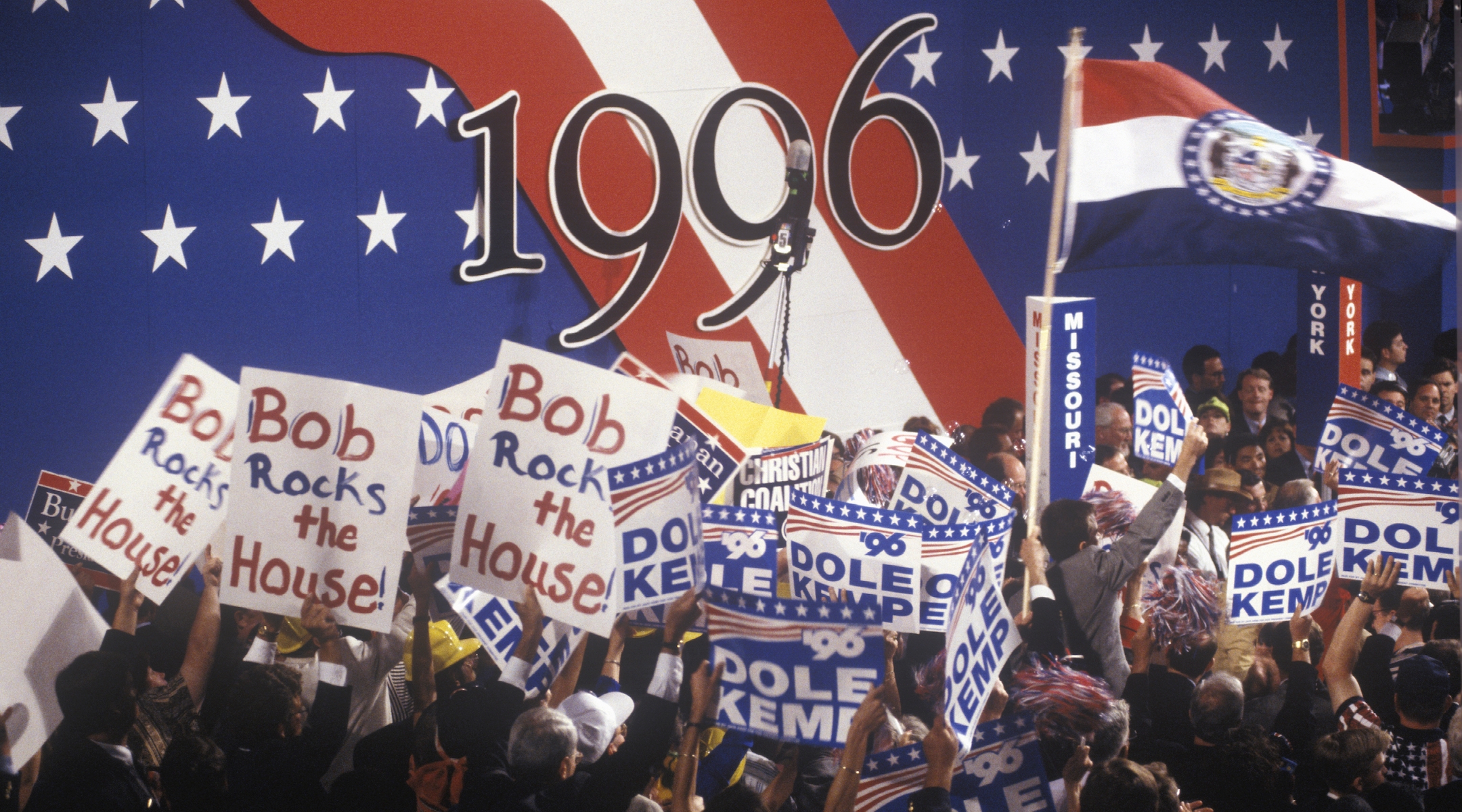 When Bob Dole made his first run for the Senate in 1968, Esther Levens and her husband, Vrem, hosted 500 people in their back yard in Johnson County, Kan., so people could get a close look at him.

“He was a congressman from western Kansas and no one knew whether he was a Democrat or a Republican,” Levens said.

She and her husband, who is now deceased, formed a close friendship with the former congressman, who is now the 72-year-old Senate majority leader and major contender for the Republican presidential nomination.

Over the years, they grew to admire what she described as Dole’s “brilliance,” his “strong legislative skills” and “his loyalty to causes and to people.”

“He is as honorable and decent a man as you can find,” she added.

Levens, the president of a group called Voices United for Israel and now a national activist for Dole’s presidential campaign, acknowledges that she has some differences with Dole on domestic policy issues, such as abortion, but she has made peace with those differences.

“I’m pro-choice, but I don’t think I can agree with a candidate on every issue,” she said. “You have to establish priorities and my priority is Israel.”

In her political calculations, Levens is somewhat typical among Jewish Republicans.

Although President Clinton is expected to garner as much as 85 percent of the American Jewish vote come November – Jews traditionally embrace the Democrats – Jewish support in the Dole campaign is significant.

Five of Dole’s 15 national campaign co-chairmen are Jewish. In addition, Dole is expected to win the overwhelming majority of the Jewish GOP vote throughout the primary season.

Jewish supporters describe their man as a steady, proven leader with a character shaped by an early struggle with poverty, a heroic fight against Nazi tyranny and a devastating war injury that taught him compassion for and dedication to those with disabilities.

They say he is a longtime friend of Israel, advocate for Soviet Jewry and supporter of foreign aid. They also point to his recent sponsorship of the congressional initiative to move the U.S. Embassy in Israel to Jerusalem.

But his record, say critics, is far from stellar.

Even his supporters acknowledge that he called for cuts in aid to Israel in 1990 and has lashed out at times at Israel and the pro-Israel lobby. Dole opposed the recognition of Jerusalem as Israel’s capital as recently as 1990.

But supporters of the veteran senator contend that those positions involved “extenuating circumstances” that should not cloud Dole’s overall record.

“Dole has a 30-year relationship with Israel, longer than any other candidate, including the president,” said A. Mark Neuman, an active Dole supporter who was an associate director of political affairs in the Reagan White House.

“He has voted for aid to Israel” countless times “as a member from the state of Kansas, which doesn’t exactly have a big foreign aid constituency,” said Neuman, now the Washington representative for The Limited Inc., the business headed by Leslie Wexner, who is one of the Dole campaign’s national co- chairmen.

“Dole is probably the most important supporter in the United States of the peace process being pursued by the elected government of Israel,” Neuman added. “Without his support we’d be in big trouble.”

While Jewish supporters concede that during this election campaign Dole has come down to the right of them on certain issues, they insist that he is a true moderate at heart who has to be “flexible” to win the nomination of a party contending with right-wing candidate Pat Buchanan.

Those who have worked with or watched Dole in the Senate over the years note that he has long been a champion of traditionally liberal causes such as food stamps and nutrition programs for mothers and infants, but has moved notably rightward as the presidential election season has heated up.

For instance, Dole has recently ratcheted up his opposition to abortion, except in cases of rape, incest or when the life of the mother is endangered. He had supported a constitutional amendment that would ban abortion, but recently retreated from that position. And he led the fight against the nomination of Dr. Henry Foster, who had performed a number of abortions, for surgeon general.

Dole also has touted his support for voluntary prayer in public schools, a position opposed by many Jews. And he likes the idea of vouchers to enable parents to choose between public and private schools for their children.

“Today we find that voluntary prayer is forbidden in our classrooms, that the moral code we nurture in our churches and synagogues is under attack from our government,” Dole said in a speech in April of last year in Des Moines.

Dole gets one of his strongest votes of confidence from Max Fisher, the veteran Jewish statesman who serves as honorary chairman of the Dole campaign.

“He’s the man of the moment,” added Fisher, especially “given the emergence of Pat Buchanan,” whom he termed “a disgrace to the political system.”

“Especially at times like these, we need somebody with a steady had who can bring people together.”

In Neuman’s view, “the Jewish community has a stake in ensuring the Buchanan candidacy is defeated and repudiated” and one way to do that is to throw support behind Dole.

Still, statements from his past continue to haunt Dole.

In 1990, Dole proposed 5 percent across-the-board cuts in aid earmarked for Israel and other top recipients in exchange for aid to emerging democracies.

Criticizing American Jewish leaders’ support for U.S. aid to Israel, Dole was quoted saying: “they wouldn’t give one penny to anybody else. It’s selfishness.”

In a subsequent effort to explain his remarks, Dole said his assertion was not intended as “personal or ethnic attacks on anyone in the Jewish community.”

Dole also is remembered for having lashed out when Israeli commandos in 1989 seized a Hezbollah cleric, Sheik Abdel Karim Obeid. U.S. Marine Lt. Col. Williams Higgins was hanged by his kidnappers in Lebanon in apparent retaliation.

“I would hope the Israelis would take another look at some of their actions, which they must know in advance will endanger American lives,” Dole was quoted as saying in the Washington Post.

“Perhaps a little more responsibility on the part of the Israelis would be refreshing,” he added.

Sources say the bitterness of some of Dole’s remarks came from a feeling of betrayal after he helped engineer the Senate’s 1986 ratification of the Genocide Treaty, which recognized genocide as an international crime, nearly 40 years after the United Nations adopted it.

Dole was deeply hurt, they say, when the Jews who had enlisted his help in the ratification effort later succumbed to pressure by the Turkish government to fight against the inclusion of the 1915 massacres of Armenians by Turks as examples of genocide to be displayed at the U.S. Holocaust Memorial Museum in Washington and at other memorials.

Dole apparently has profound attachments to the Armenian community, prompted in part by the Armenian surgeon who restored the partial use of his arm, which was critically injured when a shell exploded on a World War II battlefield in Italy.

Dole was also rumored to be angry that he did not get PAC money for his prior presidential election campaigns.

Sen. Arlen Specter, R-Pa., the only Jewish Republican in the Senate, recently threw his support behind Dole and defends his record on Israel.

Specter, who made his own brief bid for this year’s Republican nomination, has known Dole since Specter was 12 years old and moved to Dole’s hometown, Russell, Kan., a town of 4,498 with only one Jewish family – the Specters.

“Bob Dole is a terrific guy,” Specter said. “He’s clearly the best choice of everybody who’s out there. He’s very strong on civil rights and equal opportunity.”

Although the National Jewish Coalition, the Republican Jewish group, will not endorse any particular candidate, two of the coalition’s big supporters – Klein and Fisher – are on board with Dole.

Dole is “the kind of man we need to be president, with strength and vision,” Klein said.

Especially in the face of the Buchanan rise, Klein added, Dole “needs to articulate that vision. The soul of the party is at stake.”