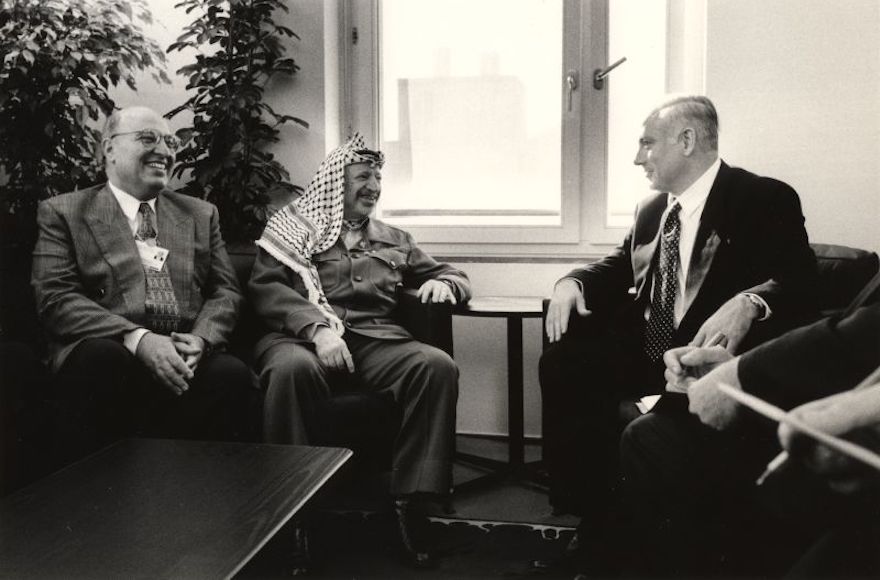 An Israeli-Palestinian agreement for the turnover of most of Hebron still remains elusive.

After more than 13 weeks of intensive discussions — as well as a secret meeting this week between the leaders of the two sides — repeated statements that an agreement was imminent have proven premature.

Observers say the agreement is now being held up over a Palestinian demand that Israel adhere to a strict timetable for redeploying from rural sections of the West Bank, as called for under the terms of the Interim Agreement signed in September 1995.

As far as Hebron itself is concerned, the two sides have reportedly resolved most security issues relating to the Israeli troop redeployment in the West Bank town, which is home to some 500 Jewish settlers and 130,000 Palestinians.

Not yet resolved is the matter of joint Israeli-Palestinian patrols near the Tomb of the Patriarchs, which is holy to both Jews and Muslims.

But the Palestinians are now calling for commitments from Israel to implement aspects of the Interim Agreement that are not related to Hebron.

Along with the further redeployments in the West Bank, these include opening a safe passage route for Palestinians traveling between the West Bank and Gaza Strip, and the release of Palestinian security prisoners from Israeli jails.

But after more than four hours of discussions, the two failed to resolve their differences.

The talks came after a week of indications that the two would soon hold a summit to initial an agreement.

Instead, they apparently decided to hold a behind-the-scenes meeting in an effort to iron out the final obstacles.

Netanyahu later said he regretted that word of the meeting had been leaked to the media.

“I had hoped the meeting would remain secret because I think it is important for such meetings to help build trust, to build working relationships,” Netanyahu told a business conference Sunday. “There are some meetings which should not take place in the light of the cameras.”

The leak to the media apparently took senior aides from both sides by surprise.

Danny Naveh, Cabinet secretary, told Israel Radio that the prime minister is not required to inform his aides or ministers of every planned meeting with the Palestinian leadership.

Naveh added that while no additional talks with Arafat were scheduled, he was sure the two would meet again soon.

The Netanyahu-Arafat meeting continued as U.S. Special Middle East Coordinator Dennis Ross continued his efforts to get the two sides to reach an agreement.

President Clinton is pressing Israel and the Palestinians to conclude the accord before his Jan. 20 inauguration to a second term, according to the Israeli daily Ha’aretz.

Both Netanyahu and Arafat have been invited to visit Washington shortly after the inauguration.

Avraham Waldman was arrested for threatening Lt. Avi Buskilo, warning him not to be a hero, because slain Prime Minister Yitzhak Rabin “was also a hero.”

Meanwhile, police released Yuval Jibli, who was suspected of knowing of Friedman’s plans before the Jan. 1 shooting took place, because of a lack of evidence.