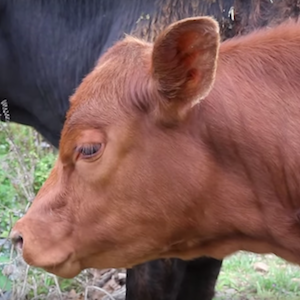 To most Israelis, she is just one of tens of thousands of cows born in Israel every year.

But to some Orthodox Jews, Melody, a young heifer with sleepy brown eyes and auburn-colored hide, is the heavenly sign of redemption they’ve been waiting for.

Described as the first red heifer to be born in the Land of Israel in 2,000 years, Melody has been the subject of both curiosity and concern since the spring, when word of her existence was leaked to the media.

Curiosity peaked again last week, when the biblical roots of the red heifer was read in the weekly Torah portion — Chukat, Numbers: 19-22.

Though not quite as famous as Dolly, the cloned sheep, Melody has become a celebrity in her own right — much to the consternation of the residents of Kfar Hassidim, a moshav in northern Israel.

“We really have nothing to do with the red heifer,” says a woman in the moshav office, her voice betraying just a tinge of exasperation. “Why not try the youth village? That’s where the heifer lives.”

Born 14 months ago, Melody led a quiet life until the media got wind of her. Since then, thousands of people have flocked to the moshav.

While most Israelis regard Melody as no more than a curiosity, some in the Orthodox community believe that the birth of a red heifer — after two millennia — signals the coming of messianic times.

The biblical red heifer was used in purification rites through the Second Temple period.

To enable Jews to approach the holy site, the high priest slaughtered a 3-year- old red heifer, burned it and then mixed its ashes with water. The water was then sprinkled on those seeking ritual purity.

“In a spiritual sense, we are in a special time in the history of the Jewish people, the time of the redemption,” Solomon says.

“We’ve had so many signs: the ingathering of the Jewish people to the promised land when Israel became a state in 1948; the transformation of the Land of Israel, which had been a wilderness before 1948, to a land of milk and honey; the capture of the Temple Mount during the Six-Day War.

“The red heifer is yet another sign that Jews will achieve redemption.”

Solomon rejects the assertion by some rabbis that Melody does not qualify as a “holy cow” because she sports a few white hairs. According to Jewish law, a red heifer must be completely red.

When the Messiah comes, Solomon quipped, the skeptics “will be checking if his hair is red or white. They’ll be checking whether he is the Moshiach of the Likud or Labor, Shas or Agudat Yisrael.”

Some self-proclaimed skeptics fear that Solomon and his followers will use the heifer as a rallying cry to seize the Temple Mount from Muslim hands and thus inflame already strong tensions between Jews and Arabs.

Some, like political analyst David Landau, have even called for the heifer’s slaughter long before she reaches her third birthday, when she could be sacrificed as part of the ancient purification ritual.

Writing in the Hebrew daily Ha’aretz, Landau wrote: “The potential harm from this heifer is far greater than the destructive properties of a regular terrorist bomb.”

Others, like Rabbi Mordechai Gafni, take a middle ground.

Gafni, a modern Orthodox rabbi, says, “Signs of redemption are exciting, but we don’t live our lives according to them, and we don’t interpret history based on them. What will ultimately bring the Messiah is ethical action and living.”

Until Israelis decide what to do with the red heifer, Mordechai Rafeld, head of the Kfar Hassidim youth village, says that no one should worry about Melody.

“Melody will always have a home with us,” he says.