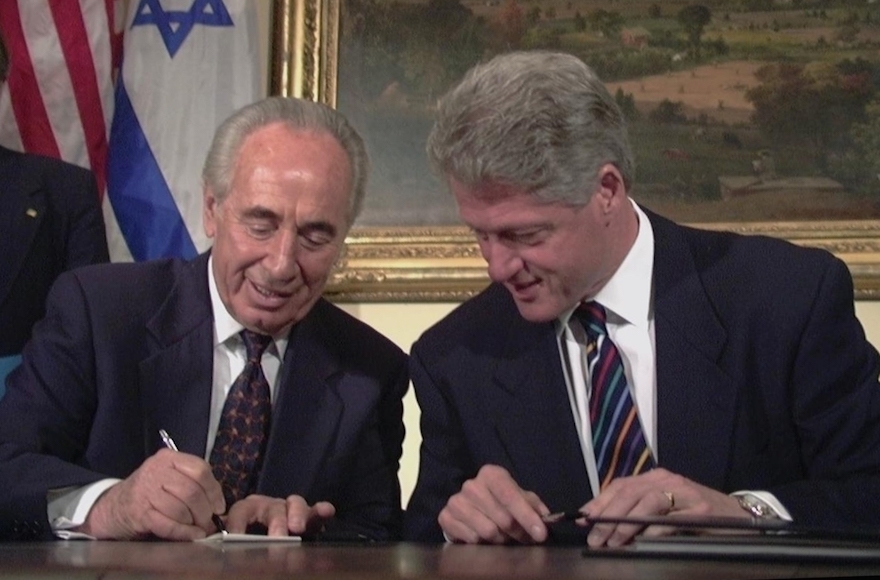 As President Clinton was receiving an honor from former Israeli Prime Minister Shimon Peres and the wife of the slain Yitzhak Rabin, Leah Rabin, the sense of longing for those Israeli leaders was palpable in the room filled with more than 100 guests, largely chosen for their support of the Oslo peace process.

In Middle Eastern diplomacy, where symbolism is as important as substance, the message of the day was loud and clear.

Clinton convened a high-profile ceremony and luncheon with the two Labor icons the same week that he said he was too busy to meet with the current Israeli leader, Benjamin Netanyahu.

“It’s clearly a message that this administration wishes that things were different and that the players in Israel were different,” said Abraham Foxman, national director of the Anti-Defamation League.

“If nothing else, the luncheon was a very clear statement that the president had four hours to spend on nostalgia, and no time to meet with the prime minister,” said Foxman, who attended last Friday’s celebration.

At the event, Peres and Rabin presented Clinton with the first Man of Peace award from their respective peace foundations. Clinton returned the $75,000 prize to fund scholarships for Americans to study in Israel.

Clinton, who veered from his prepared text to reminisce about his special relationship with Rabin, used the ceremony in the ornate East Room to prod Netanyahu’s peace policies.

In addition, Clinton used his private time with Peres to criticize Netanyahu. According to U.S. and Israeli sources, Clinton told Peres that the United States has lost faith in the premier and that Clinton’s patience is about to run out.

Netanyahu, who has so far resisted Clinton’s calls for a settlement freeze and a further redeployment in the West Bank, did not score a White House invite during his U.S. visit last week.

Clinton was reminded of his perceived snub of the Israeli premier when he disembarked from Air Force One in Los Angeles and came face-to-face with Netanyahu’s plane, which was parked nearby on the tarmac.

Netanyahu had already left the airport for a fund-raising dinner in the city.

Clinton’s dissatisfaction with Netanyahu came to a head last week when the Israeli premier claimed that he would visit the White House on Dec. 8.

According to one U.S. official, the White House was surprised to see Netanyahu announcing on CNN a date for the meeting.

That date was never “in play,” the official said, noting that Secretary of State Madeleine Albright is scheduled to travel to Africa that week.

Instead, the two are likely to meet later in the month.

Plans are already in the works for the highly anticipated meeting, which the official said would include a specific presidential call for Netanyahu to halt settlement expansion and implement a “credible” withdrawal from the West Bank.

Under the protocols of the Hebron accord signed in January, Israel agreed to withdraw from parts of the territories in three phased redeployments.

The first phase, in which Israel offered to hand over to the Palestinians 2 percent of the West Bank, was rejected by the self-rule authority and was never carried out.

According to the agreements, the third and final stage was to have been completed by the fall of 1998.

Israeli sources said Netanyahu, concerned about coming to Washington empty- handed for a Clinton meeting, has proposed merging two of the remaining three redeployments into one if the Palestinians agree to increase security cooperation and move directly into accelerated final-status talks.

But whether Netanyahu’s government could survive even a 6 percent handover was in doubt. As Knesset member Michael Kleiner of the Gesher faction said, “This is totally against our ideology, against what the prime minister has previously promised.”

Kleiner is affiliated with the Land of Israel bloc, whose 17 members, by voting against Netanyahu, could break his 66-seat majority in the 120-member Parliament.

Despite the mounting frustration, Clinton sounded a more even-handed tone in public.

In remarks aimed at Netanyahu and at Palestinian Authority Chairman Yasser Arafat, Clinton said at last week’s White House event, “Israelis and Palestinians must embrace the spirit at the heart of the Oslo accords, not jockeying for advantage but working together for the benefit of both sides.”

Both sides must realize the “need for urgency,” he said, adding, “The window of progress will become smaller with time.”

Clinton said both the Palestinians and Israelis “must refrain from actions that undermine the joint pledge they have made to strengthen security. Both sides must approach each other as partners joined by the prospect of peace and security. And both sides must live up to the letter and the spirit of their obligations.”

In what his aides later said was a gentle reminder to Netanyahu that Peres and Yitzhak Rabin also focused on Israeli security, Clinton said of the former Israeli leaders: “After a lifetime devoted to [Israeli] security, based on their experience and their understanding not only of the particular situation but of human nature, they reached a unique partnership premised on a commitment to peace as ultimately the only guarantor of security.”

But in front of an audience of former and current diplomats and Arab and Jewish Americans, it was the tribute to Rabin that carried the day.

Leah Rabin, usually a harsh critic of Netanyahu, instead focused on her fond memories of White House peace ceremonies.

She recalled the “historic scene of the president of the United States with Yasser Arafat on his left and Yitzhak Rabin on his right, towering between the two, as if saying to them, `Well, kids, the moment has come, be good now and shake your hands.’ We have come as a symbol of the hope we have not lost, despite some discouraging events and skies that have darkened things,” she said.

Clinton also spoke of the historic handshake, retelling a story of how it came about.

Before the signing of the Declaration of Principles on the White House lawn in September 1993, Clinton met with Rabin.

“I said when we went out there it was going to be quite an extravaganza,” Clinton recalled telling Rabin. “Mr. Arafat was an emotional person, you know, and there was going to have to be a handshake.”

According to Clinton, Rabin said, “All right. But no kissing.”

Speaking soon after the second anniversary of Rabin’s death, Clinton was emotional about his former peace partner.

He said he keeps in his White House residence a silver tray that Peres gave him. On it, he said, stands the “the yarmulke that I wore at the prime minister’s funeral, the little pin I had to wear to go to the grave side and a small stone I took from the grave.”

“Above it,” he said, “I have the picture of us together the last time I ever saw him, where I’m straightening the bow tie I had to get for him” because he didn’t bring one for a black-tie dinner they were attending.

Clinton then shifted to the political realities that will likely bring Netanyahu to the White House before the first of the year, saying: “The only way we can truly honor the memory of our friend, and the continuing work of our friend Shimon Peres, is not to let it go, but to bear down and see it through.”