Passover Feature #6: Use of ‘Shmurah Matzah’ Spreads Beyond Orthodox 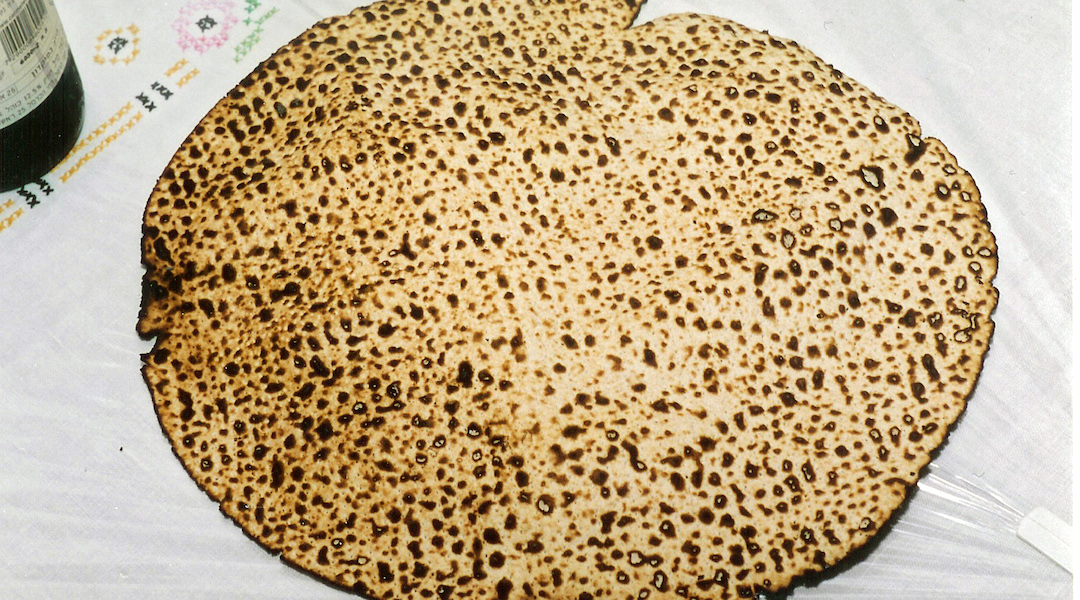 When Harriet Schachter goes to her friends’ home for Passover seder in Milwaukee, she’s not certain how many of her four young adult children will be coming with her.

But one thing she knows for sure she’ll be taking along: a large, cardboard box filled with six flat circles of matzah, each the size of a small pizza.

“We always take our `shmurah matzah,'” says Schachter, who describes herself as a Reform Jew and who does not currently belong to a synagogue.

The matzah is called “shmurah” because all its components are “guarded” by a Jew from the moment the sheaves of wheat are sown until weeks or months later, when the finished product rolls slowly out of the oven, 18 minutes or fewer since water first touched flour.

While all matzah, including the more familiar square variety, is required to be completed within that 18 minutes, extra care is given to ensure that no stringency is spared with the shmurah kind.

Mixing and rolling utensils are cleaned after each use with shmurah matzah to ensure that no moisture from a previous batch touches flour later. This way, no batch is mixed for longer than the prescribed time.

Human eyes watch over the entire shmurah process carefully, while a machine monitors most other matzah varieties.

Shmurah matzah is prized by its devotees, the bulk of whom are Orthodox but whose numbers include a growing number of non-Orthodox Jews, for its ritual and esthetic purity.

And because it is made by hand, by people doing it with the intention of fulfilling the commandment to eat matzah on Passover, some view it as a more exalted way to fulfill the mitzvah.

While it has always been used by the fervently Orthodox, in recent years it has become widely used by modern Orthodox Jews as well.

While some use it throughout the eight days of the festival, others use it only for the seders and rely on conventional matzah for the rest of the holiday.

Some shmurah afficionados even say they can distinguish between the taste of matzot made by different bakeries.

“It has to do with the fineness of the flour, the gluten content, and also the thinness of the matzah,” said Rabbi Ephraim Buchwald, the creator and director of the National Jewish Outreach Program, which sets up basic Hebrew courses and Shabbat experiences in synagogues of every denomination.

Buchwald, who is Orthodox, takes his extended family to visit the matzah bakery run by Popov Chasidim in the Williamsburg section of Brooklyn, N.Y., a few weeks before Passover each year.

There, in the bakery crowded with 50 or 60 people, each person mixes, shapes and bakes his or her own matzah.

Down the street is a bakery, run by the Satmar Chasidim, which is packed with as many as 200 people, Buchwald said. And in another Brooklyn neighborhood populated primarily by the fervently Orthodox, Borough Park, even more bakeries run at their highest capacity to meet the growing demand.

The Lubavitch community’s local shmurah matzah bakery in the Crown Heights section of Brooklyn is small by comparison.

Yet the Lubavitch may have had more to do with the growing popularity of shmurah matzah than any other group.

In the weeks before each Passover, 3,500 Lubavitch emissaries around the world distribute packages of shmurah matzah to people in their communities, generally not asking for money in return — even though the matzah sells for about $13 per pound.

Last year they handed out 3.5 million pounds of the ritual cracker, said Rabbi Zalman Shmotkin, a spokesman at Lubavitch headquarters in Brooklyn.

It has been a priority for the emissaries since 1954, when the late Lubavitcher rebbe, Menachem Schneerson, instructed his followers to bring other Jews closer to their tradition by sharing the matzah with them.

Many of the emissaries also run model matzah bakeries in their community to which they invite Jewish children of all affiliations.

For Schachter, as for many of those who use shmurah matzah, the connection is more emotional than halachic — or according to Jewish law.

“Even though the Lubavitch shaliach had a sense my seder wasn’t exactly like theirs, they wanted me to have shmurah matzah, wanted me to celebrate the holiday in solidarity with other Jews.

“I really felt a connection to ahavat Yisrael [love for fellow Jews] by this gesture,” she said.

“It has also provided all sorts of interesting things to talk about, since many of the people at our seders had never seen shmurah matzah. They always ask what it is, why it is, and it opens lots of interesting discussions.”

Shmurah matzah “is like fruitcake,” said Rabbi Debra Orenstein, who is affiliated with the Conservative movement and based in Los Angeles.

“There are lots of jokes about breaking teeth on it, but at the same time there’s a lot of affection for it. This is one of the few times that my ultra- Orthodox cousins in Borough Park send us anything. It’s one of the few points of connection.”

At Reform Congregation Beth Elohim in the Park Slope neighborhood of Brooklyn, N.Y., a member of the congregation was raised in a Satmar Chasidic family and her brother is one of that community’s shmurah matzah bakers.

When the Hebrew school committee was trying to come up with new fund-raising ideas about six years ago, she asked her brother to send some over.

That first year, the dozen pounds he sent over “was gone in two seconds,” said Randi Jaffe, the congregation’s religious school administrator.

“Most Beth Elohim members don’t care that it’s shmurah” or ritually perfect, Jaffe said. “It’s the fact that it’s round and bumpy and doesn’t look like the square, perfect ones.

“It’s a much more palpable connection to the ancient tradition” that makes it so appealing, she said.

“You can really imagine it going on someone’s shoulder and baking in the desert sun” as the biblical Exodus story tells us the original matzah did while our ancestors fled their slavery in Egypt, heading for a new world.