Behind the Headlines: What Does Success of ‘Seinfeld’ Say About the Jews of America? 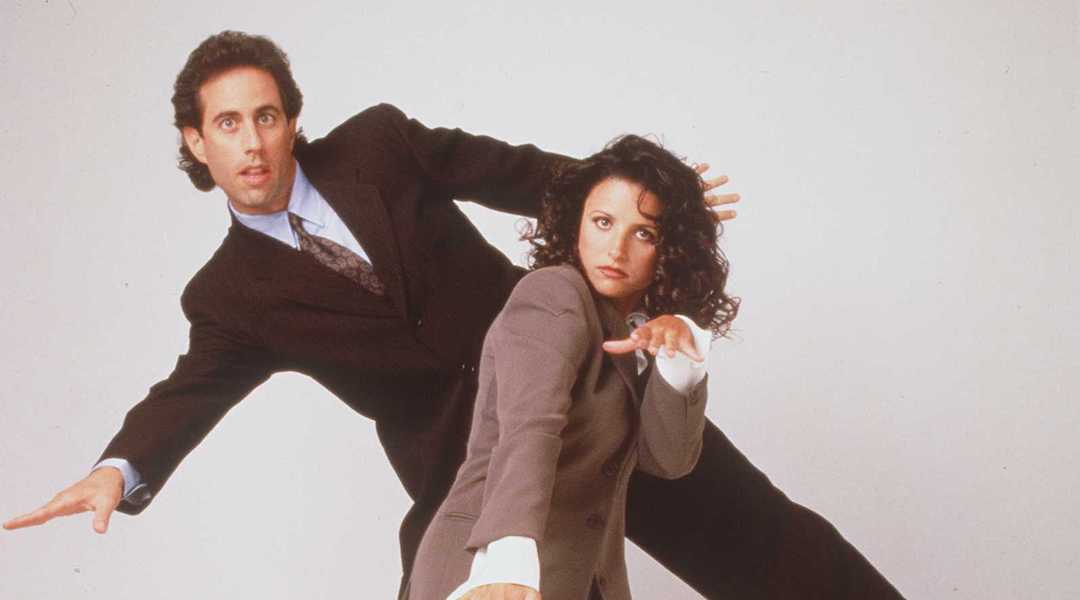 “Too Jewish” was the way a top Jewish television executive dismissed the original pilot for “Seinfeld.”

So it is not surprising that when the TV show was given a second chance by NBC a year later in 1990, co-creator Jerry Seinfeld was uncomfortable producing specifically Jewish plots.

“He tried to avoid it from the beginning,” says a Jewish co-producer and “Seinfeld” scriptwriter, Gregg Kavet.

But with a significant number of Jewish writers on the show — most recently, says Kavet, there were “six and a half” out of 10 — perhaps “Seinfeld” was bound to deal with Floridian parents, kosher girlfriends, Jewish singles events and even the “Soup Nazi.”

What better way for a Jewish comedian to make the world a completely funny place than to find humor in the most terrifying event that has afflicted Jews?

In any event, NBC was wrong — not that there’s anything’s wrong with that.

As Jerry and his sidekicks — Elaine, George and Kramer — close their nine- year run atop the Nielsen charts, and as millions of devoted fans around the globe prepare to watch the show’s final episode May 14, it is obvious that the quirky witticisms and neurotic, oddball idiosyncrasies of its four singles living on Manhattan’s Upper West Side were not too Jewish for America.

So what does its success say about Jewishness in America? And in what way was “Seinfeld” — the show and its characters — Jewish anyway?

In a recent article in The Washington Post, television critic Tom Shales declared that the problem with “Seinfeld” is not that it was too Jewish, but “too self-hatingly Jewish.”

And there’s no doubt that Shales’ argument appears to have some merit. Think of some of the episodes that dealt specifically with Judaism:

After Elaine — who plays a non-Jewish woman in the show — seeks counseling from a rabbi, the rabbi divulges one of her secrets on a national television talk show.

An exacting chef/proprietor of a neighborhood soup stand is called a “Soup Nazi.”

The mohel that Elaine finds for a friend’s child’s bris is so high-strung that he mistakenly cuts godfather Jerry’s finger instead.

Jerry and his girlfriend-of-the-week are caught by Jerry’s archenemy, Newman, making out during “Schindler’s List.”

In an episode titled “Shiksappeal,” Elaine discovers that Jewish men like her because she is not Jewish.

Rabbi Jonathan and Judith Pearl, co-directors of the Jewish Televimages Resource Center, a project that traces the way Jews are depicted on television, agree with Shales.

“I think when someone pokes fun out of love and affection, it comes through no matter how stereotypical or offensive it might seem,” he says.

But the Pearls, who will soon publish their first book on how Jewish themes and characters have been portrayed on television, find “Seinfeld” to be blatantly hostile toward Judaism.

Pearl contends that “Seinfeld” reinforces “unfortunate” stereotypes regarding Jewish clergy, ritual and Jewish women, rather than using its power to produce honest and positive depictions of Jews and Judaism.

But Abraham Foxman, national director of the Anti-Defamation League and a huge “Seinfeld” fan, believes that Pearl may be missing the point.

“Getting more positive messages out about Judaism is not what `Seinfeld’ is about,” he says. “It’s comedy.”

Furthermore, he said, considering the longevity of the hit, “Seinfeld” could have had even more offensive episodes.

Foxman takes issue with only two episodes — the one with the “Soup Nazi” because, he says, it trivializes the Holocaust, and the one involving the nebbishy, untrustworthy rabbi who betrays Elaine.

But Foxman adds, “The Jewishness of the `Seinfeld’ characters were worn comfortably and naturally on their sleeve.”

“There were no bizarre or eccentric Jews,” which is a development for Jews in America.” `Seinfeld’ is human, universal.”

Defenders of “Seinfeld” point out that the Jewish characters are no more blatantly stereotyped than are other minorities.

The show pulls no punches when it comes to using midgets, homosexuals or hard- of-hearing characters for a laugh.

Of course, the show just as often uses episodes involving these players to attack the main characters’ stereotypes about them.

But Jews — of all generations — are among the show’s biggest fans. And judging from numerous discussions in Jewish chat rooms on the Internet, the vast majority of Jews are not irked by the questionable depictions of Jews.

“The Jews have arrived,” says California Rabbi Harold Schulweis, in the sense that they are seen as representing average Americans.

“We no longer are asking, `What will the anti-Semites say?'” he says.

But the flip side, he says, is that the show also reflects how Jews have lost their uniqueness.

“`Seinfeld’ accurately reflects a lack of purpose and spirituality in the life of most American Jews today,” says Schulweis of Congregation Valley Beth Shalom, outside of Los Angeles.

Moshe Waldoks, the co-editor of a book titled, “The Big Book of Jewish Humor,” places the issue in a historical perspective.

Waldoks says there are two types of Jewish humor in “Seinfeld”: “Jewish humor” and “Jewish-style humor.”

What he calls Jewish humor emerged from the cultural uneasiness that emerged after the birth of the haskalah, the Jewish Enlightenment, in the early and mid-19th century. This humor resulted from the more modern, European-oriented Jews making fun of their “country bumpkin” cousins, the Jews of the shtetl, and their Chasidic rabbis, who were often depicted as charlatans.

When “Seinfeld” ridicules rabbis or mohels, it is taking part in this tradition, according to Waldoks.

Jewish-style humor, Waldoks says, resulted from the tension between Jewish comedy and American culture that began earlier in the 20th century.

The balancing act of children of immigrants caught between the Old World and the New helped to mold this style, which is full of cynicism and verbal word play.

The comedians, afraid of negative reactions, often de-Judaized their subjects.

But if “Seinfeld” can be seen as part of both of these long-standing traditions, the show has also — perhaps as a reflection of contemporary America’s ethnic pride — altered that tradition: Jerry Seinfeld, unlike George Burns or Woody Allen, never changed his name

Seinfeld’s own real-life childhood is one that many American Jews would recognize.

Born in Brooklyn, N.Y., and raised in Massapequa, Long Island, Seinfeld graduated with honors from Queens College with a degree in communications.

Although he has kept his conspicuously Jewish name — and occasionally made headlines dating a younger Jewish woman — he is intrigued by Eastern religions, and by the pragmatism of the Church of Scientology, he told The Washington Post.

The show’s other real-life Jewish actor — Jason Alexander — has an intentionally unrecognizable Jewish name, but a stronger Jewish affiliation.

“Alexander went on an ADL trip to Israel,” Foxman recalls, and “came back and said he wanted to do something.”

Indeed, Alexander has done some public speaking for the group and has narrated and starred in an ADL film.

A few weeks ago, Foxman says, Alexander walked off a taping of an episode of the comedian Garry Shandling’s cable show because they were staging a simulated game show involving Adolf Hitler.

The host of the show tried to keep George on the set by saying desperately, “But you guys did Soup Nazi,” Foxman says.

“That’s totally different,” responded Alexander as he left the set.

Perhaps the difference is in the eye of the beholder — or as the “Seinfeld” characters would say — the “master” of his or her domain.

NOTE TO EDITORS: The following can be used as a sidebar box with the Seinfeld story.