The October dilemma: Should Jews trick or treat? 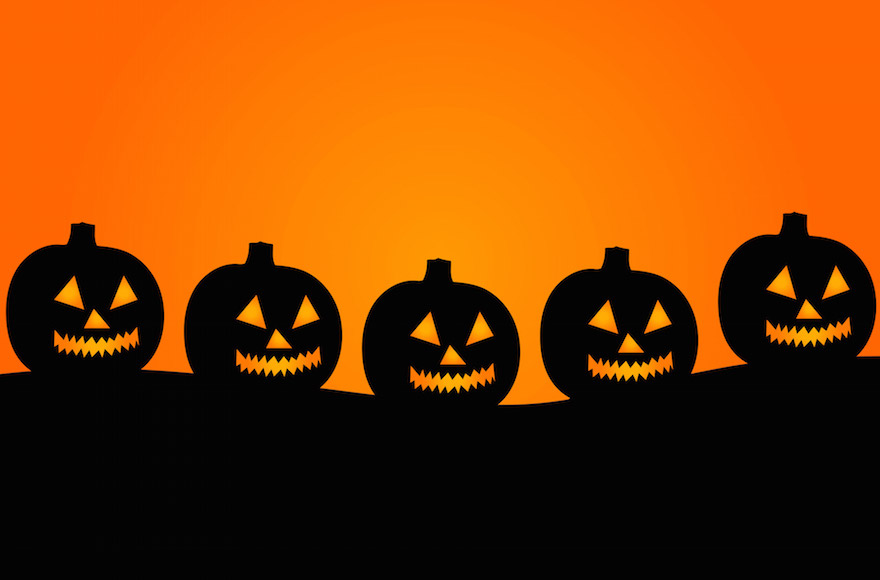 ENCINO, Calif., Oct. 20 (JTA) — For me the October dilemma consists of finding Halloween candy to pass out to trick or treaters that I will not eat, no matter how desperate or distraught I become.

For my children, the challenge is creating peer- and parent-approved costumes that will also work for Purim.

But for many Jewish parents, who associate the holiday with demons, death and wickedness, as well as with Christianity, Halloween is problematic.

My husband, Larry, and I allow our children to trick or treat, albeit with a minimum of fanfare and fuss. For us, a look at Halloween’s history demystified most of its objectionable aspects.

The word Halloween comes from a corrupted, contracted form of All Hallows Eve, which precedes All Hallows Day, created by Pope Boniface IV in the seventh century to honor saints and martyrs.

But the origins of the holiday itself go back to the fifth century BCE to Samhain, the Celtic New Year, which was celebrated on Oct. 31, officially the last day of the year.

On Samhain, the curtain dividing the realms of the living and the dead was thought to be at its thinnest, allowing spirits to spend this night visiting the world of the living and perhaps seeking bodies to possess. And allowing fortune-tellers an excellent opportunity for divination.

The Celts, primarily the adults, dressed in costume to avoid being recognized by the spirits. They extinguished their home fires and lit a large, communal bonfire, a sacred conflagration, which they then used to relight their own hearth fire, symbolically protecting themselves against the approach of another ominous winter. Some sources say they also sacrificed animals.

By 43 BCE, after the Romans had conquered much of the Celts’ territory, Samhain had become commingled with two Roman festivals. One honored Pomona, the goddess of fruit and trees, and the likely harbinger of the custom of apple bobbing. Centuries later medieval Christian authorities transformed the pagan celebration into the church-sanctioned holiday of All Hallows Day.

In 1000 CE, the church designated Nov. 2 as All Souls Day to honor the dead. On this day, poor people in parts of Europe went begging door-to-door for pastries, known as “soul cakes,” and in return promised to pray for the dead relatives of the donors. This tradition is considered the forerunner of trick or treating.

Later, European immigrants brought Halloween to America, where it was celebrated in various parts of the country, with various degrees of enthusiasm and various permutations of Celtic, Roman and Christian customs. But Irish immigrants, fleeing Ireland’s potato famine of 1846, greatly popularized the holiday. And by the 1920s and 1930s, Halloween was a completely secularized, community-centered American holiday.

The truth is that holidays evolve. And while Samhain seems barbaric and sinister to us, the autumnal rite actually helped a primitive people make sense of a scary and inexplicable world.

Today Halloween has as much relevance to Samhain and All Hallows Eve as Mother Day celebrates incest, revenge and the Christian Church.

Judaism is a life-enhancing religion. But our holidays also reflect a dark side.

In ancient times, on the three pilgrimage holidays of Sukkot, Pesach and Shavuot, we sacrificed animals on the Temple altar in Jerusalem.

And look at Purim, a personal favorite, to which Halloween is often so unfavorably compared.

While the holiday commemorates our near-brush with genocide, its actual historical basis is disputed. And contrary to Judaism’s prohibition against premarital sex and intermarriage, Esther was being prepared not for a beauty contest, as we tell our children, but for a sexual liaison with King Ahasuerus, to be relegated to the harem if not selected queen.

In averting the decree to murder the Jews, the Megillah tells us that 75,000 anti-Semites in the province were massacred, along with several hundred in the city.

Plus, the Megillah commands us to get so drunk that we can’t distinguish between “Blessed be Mordechai” and “Cursed be Haman.” Hardly an admirable exhortation.

Halloween, as I see it, is a roller coaster ride at an amusement park, a Jacqueline Susann novel, a “Lethal Weapon” movie. It’s no more healthful than the candy my kids collect.

Or maybe it is.

After all, Halloween provides an opportunity to spend time together as a family. To meet our neighbors and explore the neighborhood. To teach our kids to say “thank you.” And to support the American economy in this $2.5 billion commercial fund raiser for candy companies and costume manufacturers.

Plus, as my friend Jody Kussin, a child psychologist, maintains, dressing up in costume allows a child a chance to safely explore and experience a variety of personae, an important step in developing his or her own unique sense of self.

So all things considered, once a year, for some harmless secular fun and a serious sugar high, Halloween can be a treat.