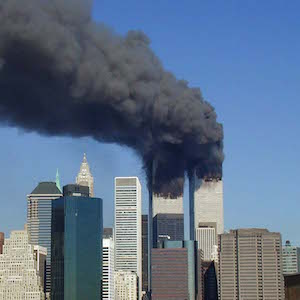 JERUSALEM, Sept. 11 (JTA) — U.S. Jews who had decided to brave the risk of terror by joining a United Jewish Communities’ Solidarity mission to Israel during the current Palestinian uprising never expected that their trip would take them out of harm’s way at home.

New Yorkers participating in the solidarity mission milled nervously around the King David Hotel on Tuesday afternoon as news of the attacks on New York and Washington played on the television in the bar.

“The irony is that my wife and everybody else were nervous about me coming to Israel, and now I can’t find out if everyone’s OK,” said Peter May, a Manhattan resident who chairs UJA-Federation of Greater New York’s 2002 campaign.

The 500 UJC mission participants — including a significant contingent from New York’s federation — arrived in Israel on Monday night for a three- day mission to express solidarity with Israel.

“Our primary purpose is to be with our family,” Morris Offit, chairman of the board of New York federation, said on Monday night. “People are living here where every day is a crisis and we want to have a feeling for what they’re going through.”

On Tuesday, they endured a quintessentially Israeli experience, as they scrambled to make sure loved ones hadn’t been affected by the attacks.

Most people couldn’t get through to their homes and offices and didn’t have access to e-mail at the hotel. They stood on line at phone booths, hoping a regular phone line would work better than rented cell phones.

Holly Mauskopf gave up trying to reach her parents in Englewood, N.J. Her father has an office in the World Trade Center but usually goes in late, she said.

“Now I know what people go through here,” she said. “This lack of communication is very surreal.”

Such thoughts were echoed by American immigrants to Israel as well. Missy Goldman, who now lives in a moshav outside Jerusalem, wasn’t able to reach her sister or parents who live near Washington.

“Now I know how my parents feel when they hear the news in Israel,” she said.

In Israel, cell phones and regular phone lines usually are tied up for several hours after a terrorist attack as people try to reach loved ones. In response to Tuesday’s attack, the Jewish Agency for Israel set up a “situation room” at its Jerusalem office, a 15-minute walk from the King David Hotel.

The room has a special satellite connection that doesn’t rely on normal phone lines, a Jewish Agency spokesman said.

The agency also was in constant contact with its delegation in the United States and was bringing Americans on Israel programs to the office, so they could call home.

Many on the UJC mission commented on their sense of isolation. May called it helplessness.

“Our country, we thought we were above it all, that it just happens to everybody else,” he said. “We thought we could deal with it diplomatically.”

The ironies were all too obvious.

“I rented a cellphone to put my wife at ease so that she could find me,” said Rabbi Alan Lucas, who lives on Long Island. “The black humor is that when this hit, I said to the group, ‘Thank God we’re safe in Jerusalem.’ ”

Several people echoed that thought. Lucas commented that despite escalating violence with the Palestinians, he felt safe in Israel, though afraid of the unknown.

Others railed against the U.S. government and the fact that it hadn’t anticipated or reacted to the attack.

“If this had happened to Israel, they would have shot the planes down,” said Wendy Lipstadt, another New Yorker. “They literally watched the planes fly in!”

Ben-Gurion Airport has been temporarily closed to non-Israeli airplanes.