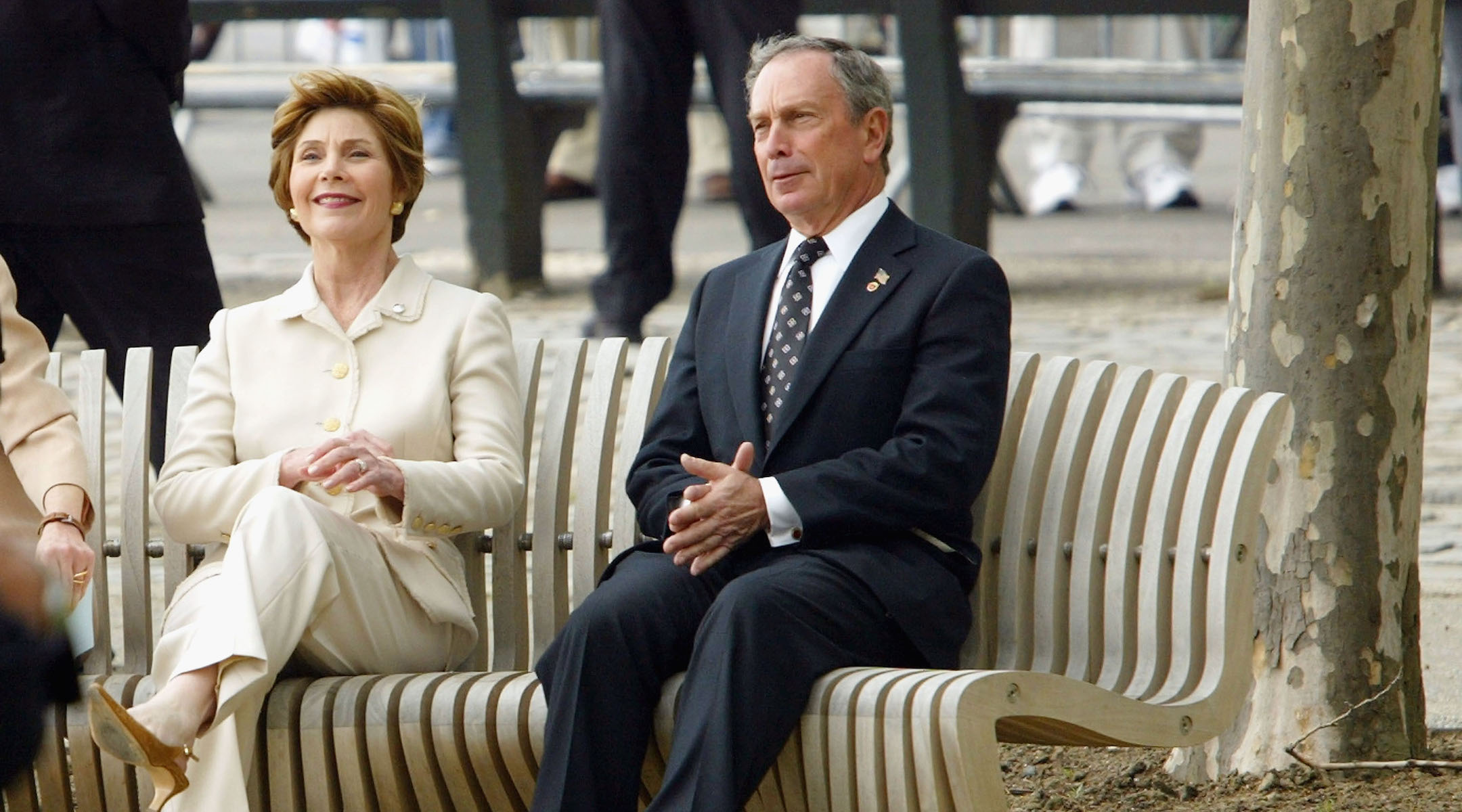 In an off-the-cuff remark, he said that reciting the Lord’s prayer in public school hadn’t been a bad experience for him as a Jewish child.

But Bloomberg, who won the mayoral election Tuesday in an upset victory over Democrat Mark Green, later said school prayer was unconstitutional.

“Whether or not I think it’s a good idea has nothing to do with whether or not it’s constitutional,” Bloomberg, 59, said.

He repeated his insistence that the Lord’s Prayer was compatible with Jewish observance. “It comes from the Kaddish,” he said.

His office later released a copy of an e-mail from Rabbi Jacob Neusner, a theology professor at Bard College in Westchester, who said the prayer is “rooted in Judaic prayer.”

The misstep — a rare error in an otherwise well-run campaign in which the self-made media billionaire spent more than $50 million — appears to highlight Bloomberg’s universalist view of Judaism.

Not that Bloomberg — who is divorced and has two daughters — isn’t involved in the Jewish world.

Although Bloomberg never released his tax return, his campaign released documents claiming he gave more than $100 million to charity in 2000, up from $46 million in 1999. Among the beneficiaries listed were the Anti-Defamation League, the American Jewish World Service, American Friends of the Israel Museum and other Jewish causes.

Criticized for having said that discrimination barely existed in the Northeast, Bloomberg said anti-Semitism had never been a factor in his life.

“I don’t know whether when I didn’t get an opportunity it was because of that or something else,” he said. “But if there is anyone who has not been ashamed of their last name it’s me. We do business throughout the world and it has never been an issue, even in the Middle East.”

Bloomberg recalled as a youth seeing his father turned away from a hotel that did not rent rooms to Jews. “You don’t see that anymore,” he said.

He recently quit several exclusive clubs, including two founded by Jews, whose memberships are not diverse. Asked if he would have done so were he not running for office, Bloomberg responded candidly.

“I don’t know the answer to that,” he said twice. “I think I might not have focused on it, but over the last few years I’ve tried to get them to change.”

He declined to chastise the clubs.

“My actions speak for themselves,” he said. ” I’m not here to criticize anyone’s right to get together.”

Born in the Boston suburb of Medford — where his 92-year-old mother still lives — Bloomberg grew up in a Conservative family but now attends a Reform congregation, Temple Emanuel on Manhattan’s Upper East Side, where he resides.

“I like some of the symbolism of the more Conservative, but I think it has more to do with who the rabbi happens to be and whether you like his or her values,” he said.

“Fundamentally I’m a fiscal conservative and a social liberal,” he said.

Bloomberg made his business acumen and his purported ability to rebuild the city after the Sept. 11 terror attacks a focal point of his campaign.

Bloomberg said he was not opposed to recognizing gay marriages.

“I don’t plan to spend a lot of my time performing marriage ceremonies,” said the divorcee. “When I got married I chose to marry a woman. I do not, however, think it is my business who you marry.”

During a series of questions on conservative issues, Bloomberg said incorrectly that so-called partial-birth abortions are illegal in New York.

“I am very much pro-choice,” he said. “But partial-birth abortion is illegal here. Next.”

Abortion rights advocates say the practice is rare, but some legislators have tried in vain to outlaw it in New York.

He also mistook a recent law that would more severely punish hate crimes with a bill pending in the Legislature that would protect gay rights.

Asked if he supported the hate crimes bill, which many Republicans opposed, Bloomberg said, “I certainly have no objections to passing it” and have lobbied Senate Majority Leader “Joe Bruno to do so.”

On vouchers for parochial school tuition, Bloomberg was noncommittal.

“The evidence as to whether they work is mixed,” he said. “Vouchers and charter schools and privatization all have enough credibility to be tried.”

It is widely believed that Bloomberg benefited from the support given by New York Mayor Rudy Giuliani, whose popularity has soared since Sept. 11. In the interview with the Jewish Week, however, Bloomberg distanced himself from Giuliani on several issues of concern to the Jewish community.

And he said he would have a better relationship with the city’s African American leaders than Giuliani has.

“I think the mayor should meet with anyone that represents a group of people,” Bloomberg said. That includes the Rev. Al Sharpton.

“He represents a significant number of people, and these people are citizens of New York,” he said.

“There are very few things Al Sharpton has said or done that I agree with,” he added. “I think the Rev. Sharpton has not walked away from Louis Farrakhan the way Jesse Jackson did. My hope would be, my attempt would be to convince him to be more understanding of the Jewish community and other communities.”

Bloomberg said the mayor made a mistake by ejecting Palestinian Authority President Yasser Arafat from a city event in 1996.

“I don’t disagree with the mayor’s feelings, but if you’re going to have the United Nations here, you can’t do that,” he said.

Would Bloomberg meet with Arafat?

“He does not represent a large group of people here, so my inclination would be not to do it.”