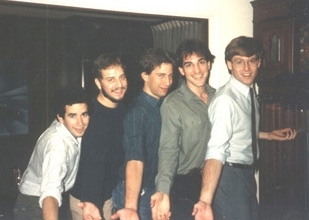 LOS ANGELES, March 12 (JTA) — When Daniel Pearl was a baby, his parents noticed a curious omission in his genetic makeup — he was born entirely without malice. “When he was a few months old, we had to pull out a cushion on which he was lying. Danny didn´t cry, he just rearranged his position,” recalled his father, Judea Pearl. The ability to quietly adapt and cope with any situation characterized the life of Daniel Pearl, relatives and friends remembered at a private memorial service here on Sunday for The Wall Street Journal reporter. Pearl was kidnapped and slain in Pakistan while working on a story about Islamic extremists. It was this adaptability and a knack for getting out of tight situations that buoyed the hope of his wife, parents and friends during an almost monthlong wait after Pearl´s abduction on Jan. 23. “We were sure that some good fairy would take care of him, and she did for 38 years,” said the father. More than a dozen speakers at the two-and-a-half hour service, held at the Skirball Cultural Center, testified to Pearl´s lasting impact on their lives and to his wide range of interests. There was the accomplished musician and violinist, the brightest student in the class who never showed off, the goofball kid and the klutzy baseball player who somehow always came up with the ball. Later, he became the journalist who talked to any stranger and found all people intriguing, who looked for the shades of gray in the world rather than in black and white. Then there was the son of Israeli-American parents, growing up in southern California, who in his last words before his execution, affirmed his Jewish identity. A slide show and video collage illustrated various stages in his life: the Bar Mitzvah celebration at the Western Wall in Jerusalem; a trip to Moscow in 1986, where he met with Jewish refuseniks, and was instrumental in bringing one family to the United States; and a journey on the Trans-Siberian railroad to China, where he conducted an impromptu Passover seder, using rice cakes in place of matzah. Some 450 invited guests attended the service, some coming from as far as Pakistan, India and England. One guest was boxing legend Muhammad Ali, who had made an impassioned plea for Pearl´s release. In words and song, those on the stage and in the audience, celebrated Pearl´s extraordinary life and gift for friendship. Rabbi Harold Schulweis of Valley Beth Shalom recalled a man who “saw journalism as a calling” and was relentless in his search for truth. LA-Shir, a Los Angeles Hebrew choir, formerly directed by Judea Pearl, sang “Uf Gozal,” a Hebrew song that includes the lyrics “Take wing, nestling/ Cut through the heavens/ Fly wherever you wish/ But don´t forget/ There are vultures in the sky/ Beware.” In a different musical style, members of Daniel Pearl´s old band, called Clamp, performed a song composed during a jam session to help a pregnant friend deliver her overdue baby. The refrain was “Come out, come out, the world is not such a bad place.” The last speaker was the slain journalist´s wife, Mariane, who is expecting their first child, a son, in May. She observed that “living with Danny was like living in a comic book. So many things happened to us all the time.” When they married in 1999, the couple wrote their own wedding contract, in which they pledged to be open to all cultures and to inspire others by the example of their own relationship. Shortly before Pearl was kidnapped, his pregnant wife asked him whether, after moving from Paris to Bombay, they might finally settle down. No, he replied, “we´re going to change the world.” Mariane Pearl concluded by saying, “I have made a commitment that Danny will live through me and my son.” “They may have blown out a candle, but the light is still on.” Two funds have been established in the slain journalist´s memory. The Daniel Pearl Foundation is to support causes that inspired his life, including promotion of cross-cultural understanding and prevention of hate-based violence. The Daniel Pearl Memorial Trust will benefit his wife and their son. (Donations can be sent to The Daniel Pearl Foundation, c/o Gibson Dunn & Crutcher, 2029 Century Park East, Suite 4000, Los Angeles, Calif., 90067; or The Daniel Pearl Memorial Trust, J.P. Morgan Trust Co. of Delaware, 500 Stanton Christiana Rd., 2/CS, Newark, Del., 19713.)