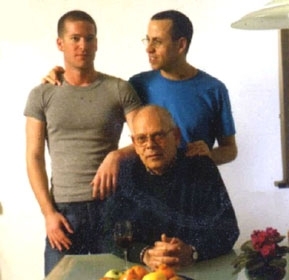 Uzi Even, seated, at home with his partner of 16 years, Amit Kama, right, and their adopted son, Yosi. (Photo courtesy Uzi Even)
Advertisement

JERUSALEM, Oct. 3 (JTA) — Activists in Israel’s gay and lesbian community are hailing the upcoming swearing-in of the Knesset’s first openly gay member, calling it a breakthrough in their efforts for greater recognition. When the Knesset reconvenes later this month following its summer recess, Uzi Even, a Tel Aviv University chemistry professor, will become one of the Meretz Party’s 10 lawmakers. He succeeds veteran legislator Amnon Rubinstein, who is retiring from politics. “This is a day of celebration for the gay and lesbian community, but also for the free and civic society in Israel,” said Itai Pinkas, chair of the Association of Gays and Lesbians in Israel. “Those who for years tried to push the community outside the public discourse will now get a declared homosexual as a Knesset member.” Rubinstein was to have been replaced by the next person on Meretz’s roster, businessman Benny Temkin, who is currently in Mexico. But Temkin announced he would decline the position for personal and family reasons. The seat then passed to Even, 61, who was next on the list. At a news conference, Even said he would focus on science, technology and education. He also promised to lobby for gay rights. “I am proud to be a Knesset member and represent the community that sent me there,” Even told the Israeli daily Ma’ariv. Labor Party Knesset Member Yael Dayan, who initiated the first Knesset conference on gay and lesbian issues 10 years ago — in which Even participated — welcomed his appointment to the Knesset. Dayan invited Even to head a parliamentary subcommittee on gay issues that would function under the auspices of her Committee for the Advancement of Women. Legislators from the fervently Orthodox parties condemned Even’s appointment. Shas legislator Nissim Dahan called the appointment “a black day for the State of Israel.” Even dismissed the criticism. Once the media hype blows over, he said, Shas “will have no problem cooperating with me in the Knesset. My vote will be equal to that of every other legislator.” Even, who lives with his longtime partner, has played a key role in advancing gay rights in Israel. In 1993, when the army found out that Even was living with a man, it removed him from his job as an intelligence officer. He later was invited to address the Knesset about discrimination against gays in the army. Orthodox lawmakers walked out when he spoke, but his efforts eventually helped outlaw such discrimination. Within months, a regulation prohibiting discrimination against gays in the armed forces was signed by then-army chief of staff Ehud Barak. Even later successfully sued Tel Aviv University to get the same benefits for his partner, Amit Kama, a communications professor, that the school extended to faculty spouses. Even and Kama also were among the first homosexuals to become foster parents in Israel when they took in a 15-year-old whose family had thrown him out for being gay. The social welfare authorities and the boy’s biological parents approved the arrangement.