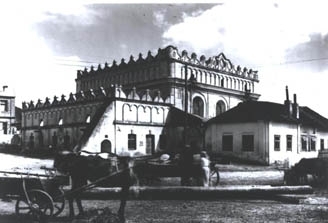 The Great Synagogue in Luboml, Poland, with shtiblekh ( small prayer houses) at right, circa 1930.

WASHINGTON, Nov. 4 (JTA) — The Polish shtetl of Luboml no longer exists, but a trove of photos and artifacts that document the town’s Jewish past has a new lease on life in downtown Washington. With a handshake and a thank you last week, Aaron Ziegelman donated his collection of photographs and artifacts from Luboml to the Library of Congress. The exhibit will be housed permanently in the library’s American Folklife Center. Ziegelman, 74, a New York real estate magnate and philanthropist who was born in Luboml, spent years gathering photographs, letters, Judaica, maps and other materials documenting everyday life in the typical shtetl community. The area is part of Ukraine today. James Billington, the librarian of Congress, praised Ziegelman for having “kept alive a memory that others sought to destroy.” The Polish ambassador to the United States, Przemyslaw Grudzinski, noted that shtetls are an important part of Polish Jewish history, and made reference to the rabbinic concept that to save one life is tantamount to saving the whole world. “To save the memory of one shtetl as a living organism is to save the life of other shtetls,” he said. Indeed, the images of Luboml — Libivne in Yiddish — are representative of many Jewish communities that existed across Eastern Europe before the Holocaust. Ziegelman wanted to portray the regular lives of Luboml’s Jews. His collection for years was a traveling exhibit, displaying rare postage stamps, vodka labels, wedding invitations, silver kiddush cups and other artifacts to audiences in the United States, Europe and Israel. Ziegelman had gone back to Luboml years ago without a project in mind. After seeing “Schindler’s List,” however, he began wondering how he could tell the stories of people murdered in the Holocaust. With Holocaust education placing so much emphasis on statistics, Ziegelman said, he began collecting artifacts that provided a comprehensive picture of what daily life was like for a shtetl’s inhabitants. “These lovely people were murdered,” Ziegelman told JTA. “That has more of an impact than numbers. It’s a stronger message.” Michael Grunberger, the head of the Library of Congress’ Hebraic section, said the library needs to work on developing collections about life in Eastern Europe. “This is a window into how Jews lived — not how they died, but how they lived,” he said. By donating the collection to the Library of Congress, it becomes part of a permanent collection and will be digitized for the Internet, Ziegelman said. But beyond that, he had a symbolic reason for the donation: It represents the fulfillment of the dream of acceptance and respectability that many Jewish immigrants had when they left Europe for the “goldina medina,” or the “golden land,” as America was known in Yiddish. Ziegelman was 10 when he left Luboml in 1938 with his mother and sister. At the time, there were about 5,000 Jews there. Four years later, 4,000 of Luboml’s Jews were marched to pits on the edge of town and killed. Only 51 Jews remained in the town after the war, and no Jews live there today. In one of his trips back to Luboml, Ziegelman spoke to the townspeople, some of whom recalled that the economic situation had been better when Jews lived there in the 1930s. The town’s mayor, however, told Ziegelman that some residents don’t even know Jews ever lived there. Ziegelman is considering sending some memorabilia to the town. The materials in the collection also were used in a documentary film called “Luboml: My Heart Remembers.” In the film, former residents talk lovingly about their “beautiful little town,” its marketplace, the Great Synagogue and their hard but good daily life. They faced anti-Semitism at school, they said, but such problems did not appear to detract from their positive memories. “The shtetl was an entity within a larger world, but it was complete for them,” said Ron Steinman, one of the film’s producers. Douglas/Steinman Productions completed the film, scheduled to air this fall on PBS, in a little over a year. Both the exhibit and the film use many images and photographs of Luboml. Though there were religious Jews in the shtetl, many Jews were not that observant and therefore took many pictures, explained Jill Vexler, executive director of the Luboml exhibition project. When people immigrated to the United States and other countries they took their prized possessions — including their photographs — with them, and have shared them for the exhibit, she said. Ziegelman never seems to tire of telling about how his collection came together and how it will soon be seen by thousands of people. “It’s the fulfillment of a dream,” he said.