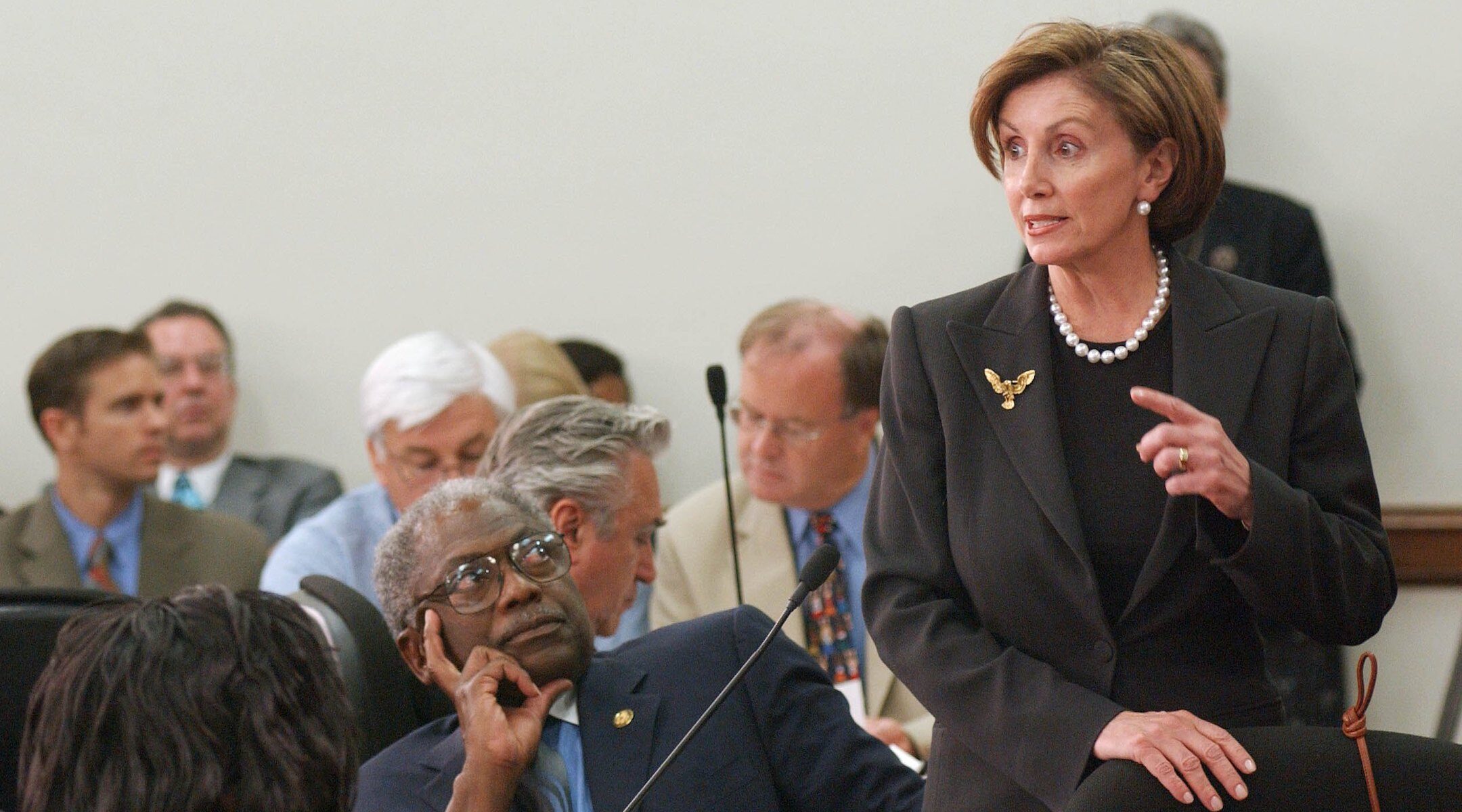 WASHINGTON, Nov. 12 (JTA) — A congresswoman was in the middle of her speech at an American Israel Public Affairs Committee luncheon in San Francisco last December when an alarm went off. Fearing a possible terrorist attack, jittery attendees were rushing out of the room when they suddenly heard Hatikvah, Israel’s national anthem.

It was the non-Jewish speaker, Rep. Nancy Pelosi (D-Calif.), who was reciting the hopeful lyrics in English. The crowd was stunned.

“She is connected to the Jewish community,” said Sam Lauter, a pro-Israel activist in San Francisco. “It comes from her soul.”

Lauter — who family has hosted Pelosi for years at its Passover seder — and other Jewish community leaders have known for a long time that Pelosi is adept at building religious and political bridges. Now she is set to take over the leadership of the Democratic Party in the U.S. House of Representatives.

Pelosi, 62, is almost assured of victory in the race for House minority leader, announcing last Friday that she had secured the support of 111 of the 209 House Democrats. The representative of California’s 8th District since 1987, Pelosi already is the highest-ranking woman in congressional history.

She appears poised to make history again in the leadership election, which is set for Thursday. Currently the House minority whip, Pelosi has been active on a number of issues that resonate with the Jewish community, such as education, AIDS treatment and prevention, health care, housing, human rights and environmental protection. She has consistently supported foreign aid to Israel, and she has backed a number of issues important to the pro-Israel community over the years, including moving the U.S. Embassy to Jerusalem.

But Pelosi also sponsored an amendment calling on Congress to urge Israel to cancel the sale of an airborne radar system to China in 2000. Israel ultimately buckled to U.S. pressure and cancelled the multi-billion dollar deal, badly harming its relations with China.

Following the Democrats’ disappointing results in last Tuesday’s national elections, Rep. Richard Gephardt (D-Mo.) vacated the minority leader post he had held for eight years. Gephardt is presumed to be preparing to run for president in 2004. Gephardt was the highest-ranking congressional official to speak at a Washington solidarity rally for Israel last April.

“We cannot stand on the sideline as the prospects for peace are undermined,” Gephardt said at the rally. He said that the United States must work to preserve and strengthen Israel’s security and that the Palestinian Authority must turn “unequivocally” against terrorism.

“Israel has the right to provide security to its people by rooting out the extreme terrorist organizations,” she said.

In May, Pelosi supported a congressional resolution expressing solidarity with Israel, which passed overwhelmingly in the House. “Terrorism and suicide bombings must not be the price that is paid for a free society,” she said at the time.

Pelosi said Arafat must show that he is a partner for peace, the United States and the international community should provide humanitarian assistance to the Palestinians, and the supposed legacy of former Israeli Prime Minister Yitzhak Rabin — Israeli and Palestinian states coexisting peacefully — must be honored. Rep. Harold Ford Jr. (D-Tenn.) also is seeking the Democratic leadership position, calling Pelosi too liberal and portraying himself as an alternative to “politics as usual.”

But Ford, a conservative-leaning African American, is thought to have little chance of winning. A more serious challenger, Rep. Martin Frost (D-Texas), dropped out of the race last Friday, writing to colleagues that Pelosi clearly had the votes to win. The withdrawal came just a day after Frost officially announced his candidacy. Had he won, Frost would have been the first Jew to serve as minority leader.

As whip, Pelosi was responsible for the Democrats’ legislative strategy in the House and for keeping members informed about upcoming issues and votes. She also served as a senior member of the powerful House Appropriations Committee and had served as the ranking Democrat on the Appropriations Subcommittee on Foreign Operations.

The question of whether Pelosi will be too liberal a voice for a party that may need to move to the center to capture votes is still being debated by Washington observers. Like other left-leaning lawmakers, for example, Pelosi voted against a resolution in October giving President Bush the authority to use force against Iraq.

In any case, Pelosi’s politics might not matter much, as Democrats will be looking mainly to maintain their unity against the Bush agenda. In her home community, Pelosi has demonstrated the ability to hold together both Democrats and Republicans, according to Rabbi Doug Kahn, executive director of the Jewish Community Relations Council of San Francisco.

“She is held in strong regard by both sides,” he said. Pelosi is not only a “passionate supporter” of Israel, Kahn noted, she also worked to establish San Francisco’s Holocaust memorial. Pelosi also served on the Democratic National Committee between 1976 and 1996. She and her husband have five children and five grandchildren.