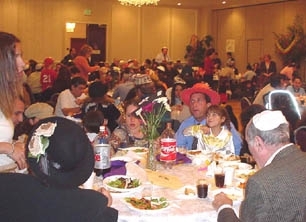 LOS ANGELES, March 24 (JTA) — Joseph Dabby, who was jailed three times in Baghdad for the crime of being a Jew, did not wish for the war in Iraq. But he fervently hopes that American troops will free his native land. The president of Kahal Joseph Congregation, Dabby is among some 3,000 Jews of Iraqi origin and descent in Los Angeles who are watching the war’s progress with a mixture of anxiety and hope. “We have deep roots in Iraq going back more than 2,500 years, and belonged to the oldest Diaspora community, with a very strong Jewish tradition,” Eliezer Chammou says. In his youth, Chammou recalls, “everybody had a chance to study in community-supported religious schools.” Rabbi Haim Ovadia, the 37-year-old spiritual leader of Kahal Joseph, says, “I feel sad, because no one wants war, but it is necessary to get rid of this evil, this Saddam Hussein. No one can speak against him, and even criticizing the color of his suit can lead to execution.” What was once a thriving and influential community of 130,000 Jews in Iraq in the 1940s has been reduced to fewer than 50 people, and no one in Los Angeles has been able to contact them for some time. “Even in the best of days you could only communicate with the remaining Jews through a third country,” Dabby says. Many in the Iraqi community here express pity for the Muslims who once were their friends and neighbors. “I’ve seen how they tortured young Iraqi dissidents who couldn’t trust their own families, and how frustrated they were that the Americans didn’t finish the job in 1991,” says Dabby, 57, a property developer. Lev Hakak, a professor of Jewish studies and literature at UCLA, was born in Israel of parents who were part of the great exodus of some 110,000 Iraqi Jews to Israel in 1951-52. They were forced to leave behind all their property and assets. His father was an educator and had “some terrible memories and some fond memories” of his native land, Hakak said. The most terrible recollections were of June 1941, when a short-lived pro-Nazi revolt produced bloody anti-Jewish riots. The fond memories included times when “Jews and Muslims lived in friendship and peace, Jews were in high government positions and we felt part of the political and intellectual life,” Hakak says. “I hope it will happen again and that Israel and Iraq will live in peace.” Ovadia expresses a similar hope. “I don’t like it when people say that all Arabs and Muslims are bad,” he says. “I hope they decapitate the leaders but that the Iraqi people, who have been brainwashed, can live in a democratic country.” Members of Los Angeles’ Iraqi Jewish community, the largest such enclave in the United States, belong to various synagogues. But the center of their religious life is Kahal Joseph, on the West Side of the city. According to Ovadia, the Sephardic congregation consists of some 400 families. Most come from Iraq, but many are descended from families that had immigrated to India, China, Singapore and Burma in the early 1900s. The past is etched deeply into their collective memory. According to tradition, the patriarch Abraham was born in Ur, along the bank of the Euphrates River, in southern Iraq. “We come from the birthplace of Judaism,” Chammou says. The Jewish community dates back at least to the First Babylonian Exile in 586 BCE. Some cite the even more ancient date of 732 BCE, when the Israelite tribes of Samaria were expelled by the Assyrians. “The community never assimilated, produced great scholars, rabbis and learned books, and for some 800 years, from 200-1038 C.E., represented the intellectual center of the Jewish world,” Hakak says. In the 19th century, Baghdad Jewry enjoyed an intellectual renaissance under the leadership of the great scholar of Jewish mysticism, Rabbi Yosef Hayyim.