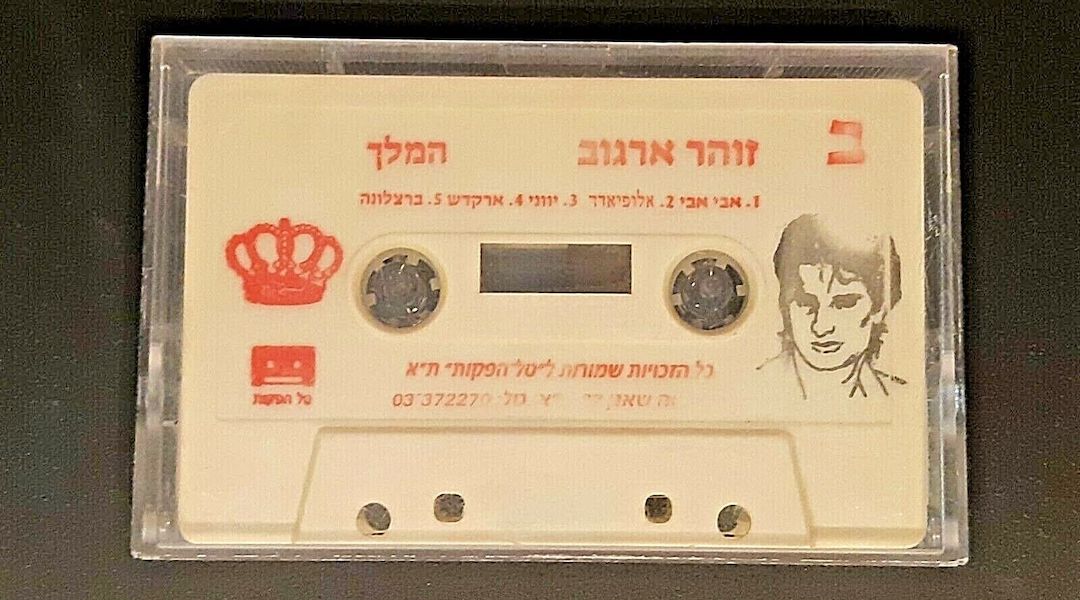 Zohar Argov, the poster boy for Mizrahi music, came onto the scene in 1978. (Ebay)
Advertisement

TEL AVIV, June 9 (JTA) — Eitan Salman is at the far end of his store, leaning against a shelf lined with the new CD by Sarit Hadad, one of Israel’s more popular Mizrahi, or Eastern, singers. Business at Salman’s music store has fallen 80 percent over the last decade, but it’s not altogether a bad thing: Mizrahi music has grown so popular in Israel that it no longer is the exclusive domain of mom-and-pop shops like Salman’s but is sold even at Israel’s Tower Records outlets.

“Mizrahi music is now available across the country, in all the stores,” laments Salman, whose shop is located across the street from where Tel Aviv’s old central bus station used to stand. Indeed, with the superstar status of singers like Hadad, Zahava Ben and Moshik Afia, Mizrahi music now tops the charts in Israel and its popularity crosses ethnic lines.

Salman and neighboring store owners remember the “cassette music” heyday, a time when Mizrahi music was the exclusive domain of Mizrahi-run stores like Salman’s, near bus stations and in souks. “

In the 1980s, Mizrahi music was not sold in record stores,” explains Barak Itzkovitz, musical editor of Galgalatz, Israel’s popular army music radio station. “Today, there is a lot of consciousness about this music, and it’s one of the most popular musical genres.” The roots of Mizrahi music in Israel date back to the 1950s and the mass influx of immigrants from North Africa and the Middle East. Every community arrived with its distinct religious music, commonly known as piyutim, as well as its favorite Arabic music. As Iraqis, Moroccans, Egyptians and Persians mixed, they exchanged musical sounds as well.

“They found out they had commonalities in their music,” said Shoshana Gabay, co-creator of “Yam Shel Dmaot,” or “Sea of Tears,” a 1998 documentary on the development of Mizrahi music in Israel. Children born in Israel in the 1950s grew up with other influences as well: American rock music, Indian movie music, French and Italian pop music and Russian-inspired Israeli music. The result was fusion music far ahead of its time. “Years later there was this world music combination in other countries,” Gabay said. “But in Israel it started very early, with the Oriental Jews.”

By the 1960s, Tel Aviv’s Yemenite quarter was home to a brand new sound. “They had all these parties, and at those parties they took what they had learned in school — Russian-inspired Israeli songs, some Chasidic songs — and made them Oriental sounding,” Gabay said. “They blended these songs with popular Arabic songs and traditional Yemenite songs and made a mix out of them. They were making an interpretation, their own interpretation.” Musicians blended not only musical styles but instruments: electric guitar and oud, synthesizer and kanoun — a classical string instrument from the Middle East and North Africa — drum kits and darbuka, a Middle Eastern and North African hand drum.

Despite the ingenuity of this new groove, Israeli fusion music stayed in Mizrahi neighborhoods until the invention of the cassette recorder, when recording suddenly became economically viable to a community with meager financial resources. The first Mizrahi music became available on cassette in 1974, and the hit bands Lahakat Haoud and Lahakat Tslelei Hakerem couldn’t produce recordings fast enough. Tapes flew off the shelves and into the hands of Mizrahi Israelis hungry for more.

But mainstream Israeli radio stations played few Mizrahi songs. “The people in radio were mostly from Europe,” said Yoni Rohe, author of the newly-published “Silsul Yisrael,” which documents the development of Mizrahi music in Israel over the past 50 years. “They didn’t like the Mizrahi sound. It was not easy for them to relate to.” “The popularity of Mizrahi music was a process that happened over 15 years,” Itzkovitz said. “Like hip-hop in the United States, it came from the hood, from the bottom up. It just couldn’t be stopped.”

Following the success of the first recorded Mizrahi music bands, Mizrahi pop stars suddenly began to appear around the country: Avner Gadasi of Tel Aviv’s Hatikvah neighborhood, Shimmy Tavori from Rishon Le-Zion, Nissim Sarousi from Ramle. Despite the dearth of Mizrahi music on mainstream radio stations, the Mizrahi music industry blossomed. Mom-and-pop stores like Salman’s could not keep up with fans’ demands.

Zohar Argov, the poster boy for Mizrahi music, came onto the scene in 1978. Argov created Israeli country music, Ron Cahlili, film director of “Yam Shel Dmaot,” told the Jerusalem Post in 1998. “His subjects were the pain of love, betrayal, loss and sorrow,” Cahlili said. “Argov was hard core, unafraid to sing about his reality and his life as he saw it.” At times compared to Elvis Presley, Argov lived on the edge: He died at 33 from a drug overdose. His albums continue to be best-sellers, however. “Nancy Brandes did production for Zohar Argov,” Rohe recounts. “Brandes came from Romania, and his connection with Zohar Argov made a new blend of music, a blend of big band and Mizrahi. This was a historical turning point. From there, in the 1980s, Mediterranean Israeli music went professional.”

Machismo was not the only obstacle to female Mizrahi musicians: In traditional Mizrahi households, a music career was equated with prostitution, and many families forbade their daughters from performing. Sarit Hadad’s defiance of her parents is legendary in Israel. As a girl, she would climb out of her window at night to perform at local clubs. Her father, who died in 1997, refused to attend even a single concert of his superstar daughter. Gabay and Rohe say the turning point for Mizrahi music was the development of commercial television and radio in the 1990s, which opened up new avenues for national broadcast of Mizrahi music, as well as other alternative sounds.

In addition, Itzkovitz notes, Mizrahi music has influenced musicians closely associated with the Ashkenazi kibbutznik movement. Among them is David Broza, who combines his style with the Mizrahi genre, and bands like Ethnix and Tea Packs, which combine rock and Mizrahi music. Today’s hottest new sound is the fusion of Mizrahi music and hip-hop, Itzkovitz says. Indeed, Mizrahi musicians have blazed the trail for Israeli hip-hop, and children of immigrants from Iran, Iraq, Morocco and Yemen are at the cutting edge of Israeli music today. Somehow, it seems, the music of the streets has became the music of choice.

“In the last years,” Rohe says, “this mix of the new generations, the blend of music that came from Ashkenazi and Mizrahi homes, has brought a new sound to the ear that is as Israeli as you can get.”