The oldest family in the world 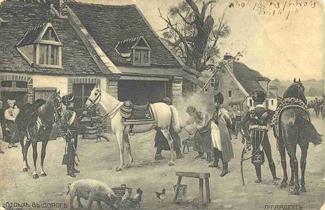 An antique postcard of Emperor Napoleon visiting a Russian village, reminiscent of his meeting with Joseph (Jonas, Yonah or Yoneh) Lurie in Mogilev in 1812. (Photo courtesy Dr. Neil Rosenstein)
Advertisement

TORONTO, Oct. 24 (JTA) — You may not find Dr. Neil Rosenstein’s new book listed on national best-seller lists, but the noted genealogist — with his tongue halfway in his cheek — compares it to the popular thriller “The Da Vinci Code.” Both books, the noted American genealogist and surgeon said, deal in varying degrees with family trees reaching back 30 centuries to the biblical House of David. But Rosenstein, a 60-year-old New Jersey resident, notes that while Dan Brown’s novel presents a clever blend of fact and fancy, “The Lurie Legacy,” published recently by the New Jersey-based publishing house, Avotaynu, is based entirely on accurate historical information, with all sources carefully noted. In “Legacy,” Rosenstein links the Lurie lineage — which includes such modern luminaries as Sigmund Freud and Martin Buber — to Rashi, the 11th-century sage, and many other revered Jewish figures from Hillel to Hezekiah — and ultimately to King David of the 10th century BCE. The book significantly extends on Rosenstein’s monumental 1990 work, “The Unbroken Chain,” which focused on the genealogies of the major Ashkenazi rabbinic dynasties from medieval times to the present. Rosenstein joked that “Legacy” is a “prequel” to the earlier book — “you know, just like in the Star Wars series.” The earlier work documented the descendants of the legendary 16th-century Rabbi Meir Katzenellenbogen of Padua, who gave rise to the Ger, Bobov and other major Chasidic dynasties of 18th-century Europe. The new book enlarges the genealogical pyramid, connecting it to Rabbi Jehiel Lurie, head of the 13th-century rabbinical court in Brest-Litovsk, then back to Rashi and beyond. In a foreword, former Israeli Chief Rabbi Yisrael Meir Lau unequivocally endorsed the validity of the historical links. “After examining the subject, I came to the conclusion that indeed it is correct to connect the Lurie family back to the Rashi — and from there to Rabbi Yochanan HaSandlar, King Yehizkiyahu and, obviously, to King David,” he wrote. The Guinness Book of Records has also accepted the Luries as the oldest-known living family in the world today, citing them in the “longest lineage” category in its 1999 edition. The family tree boasts an astonishing array of celebrated historical figures from the prophet Isaiah to Sir Isaiah Berlin, from Felix Mendelssohn to Karl Marx and Moses Montefiore. The list also includes Yehudi Menuhin, Helena Rubinstein, the Rothschilds and even Rosenstein himself. If it begins to sound like a “Who’s Who” of the Ashkenazi world, that’s because it is. Rabbi Beryl Wein, former head of the Rockland, N.Y., Sha’arei Torah yeshiva, once estimated that the Katzenellenbogen tree links more than half of the Ashkenazi Jews in the world. If so, Rosenstein conjectures that the Lurie dynasty “would possibly connect most, if not all” Ashkenazi Jews. Regarded as the most prominent and ancient of all Ashkenazi families, the Lurie clan apparently originated in 13th-century France. Although one obscure tradition suggests the name arose from the Hebrew phrase “le-or Yah” — “by God’s light” — Rosenstein considers it more likely that the name derived from the name of the town of Loire on the Rhone River. Illustrious personages bearing variants of the name — such as Lourie, Luria, Loria, Lorie and Lurya — include the Nobel Prize-winning Italian physician Salvador Luria (1912-1991) and internationally renowned political cartoonist Ranan Lurie, who penned the book’s preface. However, Rosenstein cautions that numerous prominent Luries, including the famous 16th-century kabbalist Rabbi Isaac Lurie of Safed, known as the Ari, cannot yet be connected to the clan with historical accuracy. Another important relation is Rebecca Lipa Anikster, whose unique 19th-century Yiddish-Hebrew autobiography, “Zecher Olam,” is painstakingly reproduced in the book and translated in full. But Rosenstein is still awaiting the emergence of new evidence that will pinpoint Anikster’s place in the family tree with precision. “Sometimes there will be things that will not have an answer,” he said. “In such cases, we can only say ‘Taku’ just as we do sometimes when reading the Talmud. ‘Taku’ means we have to wait for Eliyahu the Prophet to come along to tell us what is the right answer.” The book recounts many historical anecdotes, including the unverified tale of the Jewish pope — a cousin of Rashi’s named Elchanan who, according to legend, converted and became the Roman Catholic Pope Andreas. A more central anecdote involves a 19th-century figure, Yoneh Lurie of Moghilev. One afternoon in 1812, Lurie’s Minchah prayer was interrupted by Napoleon, whose army had just been defeated and who was in need of assistance. Yoneh responded nobly to the emperor’s request for help and received Napoleon’s gold-embroidered greatcoat as a token of appreciation. The jacket was later fashioned into a parochet, a curtain for the holy ark, and now belongs to the Haifa Museum. The book presents numerous rare and previously unpublished documents, including a 68-page 19th-century family pedigree by Simcha Lurie of Minsk, nephew of the esteemed talmudist, Rabbi David Lurie, or the Radal. Rosenstein acquired the manuscript for an unspecified sum from a Brooklyn rare-books dealer in 2000. Through diligent presentation of original sources, Rosenstein says he hopes to reverse several longstanding mistakes and textual misreadings that had been handed down as facts by generations of previous researchers. While not all readers will care for such obscure and erudite details, publisher Gary Mokotoff said many will appreciate the lavish reproductions of original sources and antique illustrations, as well as the 50 pages of detailed family charts at the back. Mokotoff said he sees the 390-page, large-format volume as a “coffee-table book.” “We didn’t really publish it for the genealogical community, we published it for the Jewish community,” he said. “People will want it because it tells the history of a great Jewish family.”