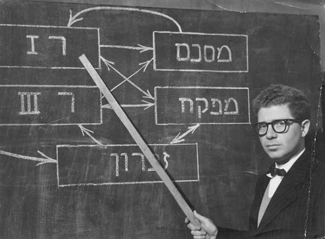 Professor Gerald Estrin explains the flow diagram of the WEIZAC mathematical unit to his staff. (Courtesy of Gerald Estrin)
Advertisement

LOS ANGELES, Nov. 17 (JTA) — When young Princeton engineer Jerry Estrin arrived in Haifa on a slow immigrant boat in late 1953 to build the Middle East’s first computer, he faced just two problems. There were no parts or tools, from vacuum tubes to soldering irons, available in Israel, and there was no staff, trained or otherwise. Now, when Israel’s sophisticated high-tech industry barely remembers its electronic progenitor, Estrin and a few old-timers are quietly marking the 50th anniversary of the WEIZAC computer, its closet-sized mainframe and some 3,000 vacuum tubes resting in a corner of the Weizmann Institute of Science. What allowed the seemingly impossible project to succeed, Estrin recalled, was the can-do optimism and improvisational genius of Israelis, just five years after they had established their state. Granted, Estrin had a few allies. One was his wife Thelma, who, like her husband, had a Ph.D. in electrical engineering from the University of Wisconsin. Both had worked for three years with John von Neumann, the principal architect of the computer age, at the Institute for Advanced Study at Princeton. When they left for Israel, von Neumann presented them with complete plans and specifications for the Princeton IAS computer. On the Rehovot campus of the Weizmann Institute, the legendary mathematician and geophysicist Chaim Pekeris had proposed a computer as early as 1946 for such complex projects as determining the world’s tides and delving into atomic physics. At the time, Albert Einstein, a member of Pekeris’ advisory committee, asked, “Why should poor Palestine build an electronic computer when there is hardly one in operation on the European continent?” Einstein finally was persuaded and the fledgling Weizmann Institute allotted $50,000, then one-fifth of its total budget, to the computer project. The other chief backer was Meyer Weisgal, who had taken over the leadership of the Institute from Chaim Weizmann. A peerless fund-raiser, Weisgal came up with $100,000, through one judicious phone call, to purchase the computer’s magnetic core memory. The Estrins, New York natives who recently marked their 62nd wedding anniversary, settled in Rehovot with their daughter Margo, who was 10 months old. “My first priority was to hire a staff and then train them in the redesign, testing and fabrication of the computer,” Estrin recalled. He placed an ad in a newspaper and right away ran into another unanticipated problem. Almost all the job applicants were post-war immigrants whose educational and employment records had been lost in the Holocaust. To winnow down the applicants, Estrin devised some simple tests to gauge their knowledge and aptitude. In short order, Estrin put together a core staff of three full-time engineers, a technician and a cleaning woman, who also was put in charge of punchcards. The group was augmented by a few part-time technicians. Ingenuity was needed to scrounge or devise parts for the WEIZmann Automatic Computer, or WEIZAC. For instance, Estrin and his team needed extremely thin copper strips, but were stuck until they discovered a shack, surrounded by goats and chickens, where two recent Bulgarian immigrants had set up shop to make parts for fans and bicycles. The Bulgarians adapted their stamping machines to produce the copper strips. Fifteen months after the Estrins arrived, WEIZAC, built at a bargain-basement cost of $200,000, was beginning to function. The family, augmented by a second daughter, Judith, born in Tel Aviv, had to return to the United States. After further tests, WEIZAC went online in 1955, and after eight years and 46,000 hours of service, was retired in 1963. Over the next decade, Estrin returned to Israel every two years to consult on WEIZAC’s successor computer, appropriately named the Golem. In 1971, he organized the First International Jerusalem Conference on Information Technology, where he presented a digitized portrait of Golda Meir to the then-prime minister herself. If the Estrins’ work left their mark on Israel, the country left its mark on the family. “The WEIZAC project drove me to make a contribution beyond my dreams,” Estrin, now 82, reminisced recently in his Santa Monica home. Building a team and heading a project in the Israeli work environment wrought changes in Estrin’s mild-mannered personality. “I learned how to pound tables, which stood me in good stead when later I became chairman of the UCLA computer science department,” he said with a half-smile. “But I really fell in love with the people and if it had been up to my wife, we would have stayed,” he added. Estrin’s legacy to Israel has been long-lasting. By building its own computer in the face of widespread skepticism, Israel “got into the information revolution early in the game,” he said. Perhaps most important, WEIZAC spawned a cadre of engineers and technicians who, with their successors, went on to staff the country’s high-tech industry and top academic institutions. The contributions of the two WEIZAC pioneers have been honored and perpetuated through the Estrin Family Chair in Computer Science at the Weizmann Institute, on whose board of governors Estrin served for more than two decades. A year after they returned to the United States, UCLA asked both Estrins to join its faculty, Jerry as a professor to build a program in computer engineering and Thelma as a pioneer developer of computer applications in brain research. The Estrins have left a legacy of another kind through their three high-achieving daughters. They also have four grandchildren. Judith has become a Silicon Valley icon, founding four companies and now serving as president and CEO of Packet Design, LLC, which develops networking technology. She has been named three times in Fortune magazine’s list of the 50 most powerful women in American business. Deborah, the youngest daughter, is a computer science professor at UCLA and founding director of the Center for Embedded Network Sensing, which last year received a $40 million grant over 10 years from the National Science Foundation. Only Margo, who was part of the WEIZAC period as an infant, has broken the family tradition by becoming a doctor of internal medicine, practicing in the San Francisco Bay area.