B’nai B’rith goes on the ‘air 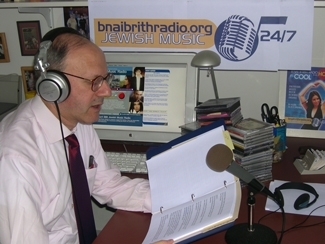 Dan Mariaschin doubles as executive vice president and the host of the organization's new radio station on the Internet. (Courtesy of B'nai B'rith International )
Advertisement

WASHINGTON, Nov. 29 (JTA) — Headphones on, face pressed against the microphone in a cramped cubicle, the leader of one of the best-known Jewish organizations in the country is reliving his youth. Well, sort of. “This is B’nai B’rith Radio, and I’m your host, Dan Mariaschin.” Mariaschin is far from the 50,000-watt radio station where he used to disc jockey in Keene, N.H., from the time he was in high school. But he also is far from his current day job as executive vice president of B’nai B’rith International. Throughout the work week, Mariaschin leaves his spacious Washington office for the makeshift radio studio down the hall, and spends several hours recording promotions and other messages for the first Internet radio station devoted to world Jewish music. “I always wanted to get back into it and I never saw the possibility,” Mariaschin said of his radio career. “Once I started in the Jewish community, there wasn’t a possibility.” But now there is. Mariaschin and other B’nai B’rith officials hope the fledgling station, launched in October, will connect younger Jews to their organization and the world of Jewish music. The approach is novel, considering that the music and the format appeal to wildly different audiences. Older Jews, more accustomed to the types of music B’nai B’rith Radio offers, are less likely to be online and using Internet radio. Younger Jews, who are more accustomed to listening to music on their computers, are less attached to Jewish musical genres. Mariaschin, who hopes his station can bridge the two groups, has been reaching out to members of the B’nai B’rith Youth Organization and Hillel, and is using genres of Jewish music that go far beyond Debbie Friedman. “We’re trying to bring Jews together,” Mariaschin said. “And it’s introducing a whole new generation of Jews to what B’nai B’rith is.” During one week in November, the station had more than 20,500 listeners. It hopes to bring in more people as it plays Handel’s Judas Macabeas on the first and eighth days of Chanukah next month, and intersperses Chanukah music into its playlist of more than 1,700 songs. Listeners can log on to bnaibrithradio.org and, within minutes, be listening to an eclectic mix of Israeli, Yiddish, cantorial, Klezmer and even Hebrew New Age and hip-hop music. There also are plenty of artists Jews will recognize, such as Kenny G., Barbara Streisand and Neil Diamond. “We’ve been such a musical people, we’ve been such a creative people,” Mariaschin said. “The beauty of Jewish music is that something is there for everyone.” While it may sound like Mariaschin is spinning Jewish records round the clock, the playlist actually is preprogrammed and runs 24 hours a day. The music plays seven days a week, but Mariaschin’s voice is not heard on Saturdays, in observance of Shabbat. That’s just one of the quirks that Jay Garfinkle, B’nai B’rith’s director of communications and the station’s program director, has had to deal with in formatting a radio station for the Jewish community. Before joining B’nai B’rith, Garfinkle produced television programs. Now, with his son Elon, he is working to create a lineup of music that will air throughout the day and night, and will be different every time someone logs on. He also is researching biographical tidbits that Mariaschin reads throughout the broadcast on the artists and the music. The program allows viewers to get the latest news headlines from JTA, and even purchase the music they are hearing via Amazon.com. “The music is for 20-somethings,” Garfinkle said. “There’s a lot of rock here and a lot of jazz.” Garfinkle said the music is “too hot” to be piped into the community centers and senior citizen homes that B’nai B’rith operates. Station creators have lofty goals: They would like to have broadcasts in Spanish and French and intersperse news reports and other features, perhaps including sports and children’s programming. The main goal, however, is to move the station from the Internet to satellite radio, where they hope to find a wider audience. Garfinkle has been sending soundchecks to Sirius Radio, one of two growing satellite radio providers, which has expressed an interest. “It’s limitless in terms of what we can do,” Mariaschin said. “The real challenge is to bring the audience in.” Another challenge is finding the time to keep the station running. In the current setup, all of the staff is working on the radio project in addition to their normal duties at B’nai B’rith. Garfinkle and Mariaschin both say that for their vision of the project to become a reality, additional funding and staff will be needed. For now, however, Mariaschin is content being the voice of the fledgling station. “My experience in radio is very positive,” he said. “I like the spontaneity of radio, and music is very important to me.”