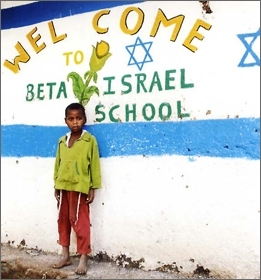 A 7-year-old boy stands in front of the Falash Mura community's school in Gondar Province, Ethiopia . A first-grader, he will study Hebrew, English and Amharic. (Courtesy of NACOEJ)
Advertisement

NEW YORK, Nov. 30 (JTA) — An Israeli Supreme Court ruling postponing a decision to expedite the aliyah of some 17,000 Ethiopians who claim Jewish ancestry has enraged the Jewish Agency for Israel — and given American Jewry time to mobilize its troops. Proponents of the Falash Mura, Ethiopians whose Jewish ancestors converted to Christianity but who now have returned to Orthodox practice, have gained steam in the American Jewish federation movement. A handful of federations created special funds last year that raised hundreds of thousands of dollars to aid Falash Mura in Ethiopia awaiting immigration. The United Jewish Communities, the federation system’s coordinating body, recently formed a committee to determine how to assist the Falash Mura. The group held its first meeting at the UJC General Assembly in mid-November to discuss building broader backing for the Falash Mura among local federations. Meanwhile, Israel’s Supreme Court decided Monday to postpone a ruling on the issue until after a Dec. 26 meeting between Sallai Meridor, chairman of the executive of the Jewish Agency, which runs aliyah, and Israeli Prime Minister Ariel Sharon. In a landmark resolution in February 2003, Israel’s Cabinet voted to immediately check the eligibility of some 19,000 Falash Mura remaining in Ethiopian compounds and bring over those that could prove maternal Jewish descent. But the government has dragged its feet, citing budget constraints. Immigration from Ethiopia is far more costly than from other places due to the tremendous social gap between the new Ethiopian immigrants and the rest of Israeli society. A representative of the State Prosecutor’s Office told the high court that the rate of Falash Mura aliyah was determined by budgetary and human resource constraints, adding that it was “unacceptable for Jewish organizations to force Israel to increase the rate through the court,” according to Ha’aretz. After the court decision, Meridor charged Israel with causing “unnecessary suffering” to the Falash Mura, and called the economic arguments against their immigration “baseless.” “It is not right to hamper the pace of immigration from any country in the world; this is the only case of this happening in the history of the State of Israel,” Meridor said in a statement. After the meeting with Meridor, the Israeli government is required to report its progress on the issue, followed by a response by the plaintiffs — families of Falash Mura who are living in Israel awaiting their relatives’ arrival. The government expects that most of the Falash Mura will be eligible for aliyah, but it’s only inspecting 100 families per month for eligibility. With just one person to handle inspections in Ethiopia, the Interior Ministry expects inspections to take another three years. Last month, the Jewish Agency asked the Israeli government to double the rate of Falash Mura aliyah from 300 to 600 per month. The UJC has agreed to advocate for that figure as well, said John Fishel, president of the Jewish Federation of Los Angeles and co-chairman of the UJC committee on the Falash Mura. The committee will use the time between now and Dec. 26 to “get more of the federated communities up to speed,” Fishel said. Fishel hopes additional communities will become financially involved and will lobby on the Falash Mura’s behalf with Knesset members. Some officials, like John Ruskay, executive vice president and CEO of the UJA-Federation of New York, have made Falash Mura aliyah a priority. But the UJC appears to be facing some resistance. “What the meeting in Cleveland did was illustrate that we’ve got a long way to go to build that consensus,” Fishel said. Unlike the Los Angeles and New York federations, whose representatives visited Ethiopia last year, many communities do not understand the Falash Mura issue, Fishel said. It’s “very hard with something like this to really understand it if it hasn’t been on your radar screen” amid the slew of issues facing federations, Fishel said. “Sometimes the process is slow and laborious, but sometimes it’s really necessary.”