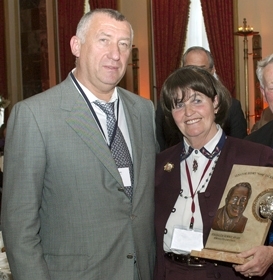 JERUSALEM, Nov. 30 (JTA) — One distinguished speaker said the United Nations actually undermines international peace and security. Another accused it of corruption and of financing terrorism. A third deplored the world body’s failure to prevent massacres in Sudan’s Darfur region. The three — Dore Gold, Israel’s former U.N. ambassador; Rachel Ehrenfeld, an expert on terrorist financing; and Baroness Caroline Cox, deputy speaker of the British House of Lords, respectively — aired their views at the second annual Jerusalem Summit, whose goal is to develop a “Council of Civilizations” to serve as an alternative to the United Nations. The three-day gathering in late November was sponsored by the Michael Chernoy Foundation, a Tel Aviv-based group financed by an aluminum mogul who directs a large portion of his money to assisting victims of terrorism and assisting new immigrants to Israel from the former Soviet Union. The foundation brought representatives of twelve “civilizations” to Jerusalem to form the nucleus of the proposed council. They included Luis Lacalle Herrera, former president of Uruguay; U.S. Rep. Bob Beauprez (R-Colo.); Ana Palacio, former foreign minister of Spain; Gen. Mansour Abu Rashid of Jordan; Rev. Kenneth Meshoe, a South African legislator; and several prominent American media figures, such as talk-show hosts John Batchelor and Dennis Prager and National Review editor David Pryce-Jones. Summit director Dmitry Radyshevsky said the council would seek to “provide a venue for constructive engagement built on universal ethical principles.” Jerusalem is the logical place for the council to sit, Radyshevsky said, “since it’s the only place that commands the respect and awe of the majority of the world’s nations and its three major religions.” “We hope to restore Jerusalem’s status not only as a religious but as an intellectual center of the world,” he said. The summit’s academic director, Tel Aviv University political scientist Martin Sherman, presented the most controversial idea of the conference. Presenting the results of a poll commissioned by the summit and carried out in mid-November by the Palestinian Center for Public Opinion, Sherman told the audience that 70 percent of 528 West Bank Palestinians surveyed said they would emigrate if offered a guarantee of a good job or good housing abroad or substantial financial compensation. Some 42 percent of those polled said they have considered emigrating permanently, Sherman said. The survey carries a margin of error of 4.5 percent. Sherman said the data support his thesis that attempts to find a political solution to the Arab-Israeli conflict have brought only suffering to both populations. Sherman called for a redefinition of the Palestinian predicament in humanitarian rather than political terms, by offering them financial incentives to relocate to surrounding Arab countries. “The Palestinians arriving at their gates will not be impoverished refugees, but relatively prosperous individuals with saving the equivalent of decades of GNP per capita in their pockets,” Sherman wrote in a 20-page booklet printed and distributed by the summit. Rather than approaching the Palestinians as a nation, Sherman’s proposal would view them as “tragedy-stricken individuals.” With the idea of Palestinian statehood gaining support around the world — President Bush has made it a cornerstone of his Mideast policy — Sherman’s proposal seems unlikely to be taken seriously in international fora. But the proposal likely would be the No. 1 item on the Council of Civilizations’ agenda, Radyshevsky said.