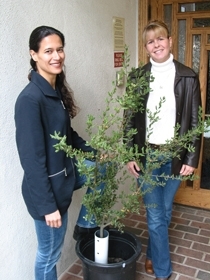 LOS ANGELES, Dec. 5 (JTA) — Question: When does a Christmas tree become a Tu B’Shevat tree? Answer: When a church and a synagogue decide that having the same tree do double duty is good both for the environment and for the spiritual awareness of their congregants. Nurit Ze’evi — who remembered joyous celebrations for Tu B’Shevat, or the new year for trees, from her childhood in Israel — came up with the idea and presented it to Rabbi Neil Comess-Daniels of Beth Shir Sholom Temple in Santa Monica, Calif. Comess-Daniels and members of his “progressive Reform” congregation, long active in interfaith relations, went for it and the rabbi turned to the Rev. Kirsten Linford-Steinfeld, of the Westwood Hills Congregational Church of the United Church of Christ, as a partner. People from both congregations agreed that the idea was brilliant. “This project marks the convergence of two traditions, without detracting from the integrity of either one,” said Comess-Daniels. “In both traditions, trees symbolize new life and hope.” Linford-Steinfeld, who has a Jewish husband, warmly endorsed the project. “We tend to link Christmas and Chanukah because they happen around the same time,” she said. “I think it’s a neat idea to connect two of our holidays in a different way, especially since Tu B’Shevat comes exactly one month after Christmas this year.” Now all that was left was to turn the concept into reality. Enter Cynthia Barzilai, president of the temple’s pre-school parents board, who volunteered as project manager. After the volunteers put in an “incredible amount of leg work,” in the words of their rabbi, Barzilai announced the final plans. Fifty Jewish and 50 Christian families each would contribute $36 to jointly purchase one tree, for a total of 50 trees. On Dec. 12, the trees, in planters, will be delivered to the church during a joint celebration with temple members. After the Christmas season, on Jan. 9, the trees will be delivered to Beth Shir Sholom families, who will care for them for the next three weeks. Then, after each hard-working tree has done its dual job, it will be planted in a public park for everyone to enjoy on Jan. 30, the first Sunday after Tu B’Shevat is observed on Jan. 25. On that Sunday morning, the Christian and Jewish families will meet at the temple and nosh on the fruits symbolic of the holiday, after blessings by the rabbi. Immediately afterwards, the trees will be transported to the Ed Edelman Park in Topanga Canyon, just west of Los Angeles, and planted there with the help of Malibu Creek State Park, the Mountains Recreation and Conservation Authority and TreePeople, an environmental group. The whole project almost fell apart over the choice of trees. The initial thought was to get pine or similar coniferous trees, traditional for Christmas. But given the environment of the planting site, the authorities ruled that only oak trees would be permitted. The parties agreed, but then it turned out that oak trees would not do well if put indoors during the Christmas season. As a compromise, the oak trees in planters will be placed outside the homes of the Christian families. Linford-Steinfeld said that she, and probably other church members, will decorate the oaks as outdoor Christmas trees. This year, the project will serve as a trial run, but Ze’evi already has more ambitious plans for the future. In a poem written for the occasion, Ze’evi envisions that in the years to come, hundreds and then thousands of Christians and Jews will join hands in planting Christmas/Tu B’Shevat trees in Los Angeles, the United States and across the world.