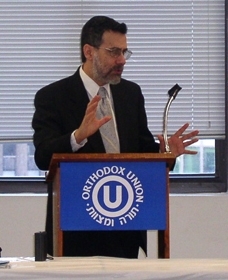 NEW YORK, Dec. 7 (JTA) — The Orthodox Union is promising to institute changes at a kosher slaughterhouse it supervises following complaints from a strident animal rights group. The promised changes at Agriprocessors Inc. in Postville, Iowa, come after People for the Ethical Treatment of Animals released a video that placed slaughter practices at the plant in question — and after the group filed lawsuits with the U.S. Department of Agriculture against both the plant and the Orthodox Union, the largest kosher supervisory organization in the world. The changes are the latest developments in a case that has shined a spotlight on a religious practice that gets little public attention. O.U. officials told JTA on Tuesday that they will make two main changes to slaughtering procedures followed by the plant, which processes meat for the Rubashkin/Aaron’s Best label. The plant no longer will allow slaughterers to pull out a slaughtered animal’s trachea in order to hasten death. Instead, an artery that supplies blood to the brain will be severed on a second cut. The Orthodox Union also said it would look for a way to either kill or stun cows that are still walking even after the initial stage of slaughtering. The changes come after a visit to the Agriprocessors plant early this week by several rabbis, including Menachem Genack, head of the O.U.’s kashrut division. A PETA spokesman said the group is pleased that the Orthodox Union is taking steps to improve the conditions for cows at the plant. Among other steps, PETA hopes the Orthodox Union will require an upright pen for animals while they’re being killed and require that Agriprocessors allow the animals to die after shechitah rather than dumping them still conscious from the pen. “Certainly admitting that there’s a problem is better than denying that there’s a problem,” PETA’s Bruce Friedrich said. “Getting rid of that horrific situation in which the animals were mutilated still fully conscious is critical.” Friedrich said the complaint against the Orthodox Union could be rescinded if the group follows a series of recommendations made by Temple Grandin, an associate professor of animal science at Colorado State University, who has been highly critical of the Agriprocessors plant. For his part, Genack said he is pleased with changes at Agriprocessors, but denied PETA claims that the plant had been violating USDA guidelines. Officials with the USDA, which has sent inspectors to the plant following the complaints, could not be reached for comment. Genack added that “all the products that came out of the plant were kosher. These procedures did not affect the kashrus.” Several rabbis were quoted in the media as saying that what they saw on a video supplied by PETA did not adhere to halachah, or Jewish law, though some of the criticisms later were retracted. Genack said he received many letters and e-mails from members of the kosher community as a result of the hubbub. In response to the concern, the Orthodox Union sent a letter to synagogue rabbis last week explaining the organization’s position on the issue, and Genack said a second letter explaining the changes would be sent out soon. PETA, which is known for its aggressive tactics in promoting its animal-rights agenda — it generated controversy last year when it compared the meat industry to the Holocaust — first raised the issue with Agriprocessors last June after being tipped off to allegations of improper procedures at the plant. In an exchange of letters, PETA raised objections and asked that an expert on slaughter be allowed to witness the process. When the exchange proved unsuccessful, PETA sent an undercover cameraman to the plant this summer to film the slaughtering process. Based on that footage, PETA filed a complaint with the USDA, complaining that Agriprocessors was not following government regulations. It sought suspension of the plant’s license and possible criminal proceedings. PETA’s letter to the USDA details what it says are violations of the 1902 Humane Methods of Livestock Slaughter Act. By violating halachic procedures, the letter claims, Agriprocessors is violating the legislation, which allows animals to be killed according to Jewish law. PETA later filed a second complaint with the USDA against the Orthodox Union.