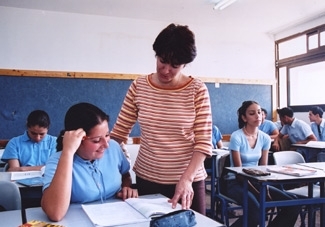 NEW YORK, Jan. 18 (JTA) — It’s not every day that Edith Everett asks someone for money. A major Jewish philanthropist, Everett and her late husband, Henry, were known to take on progressive but unpopular projects, putting their money toward social justice causes and trying to draw attention to them largely because no one else had. “We almost never ask anybody to help us in a project,” she said. “We just do it.” Until now — when she is, again, facing an uphill battle. Everett is soliciting funds to aid Israeli Druse, a 100,000-strong Arab community that has been loyal to the Jewish state and serves in its army. Some 300 Druse have been killed in the Israeli army, including several killed in recent Palestinian attacks on soldiers in the Gaza Strip. For the past three years, Everett has been the primary funder of a project of the American Jewish Joint Distribution Committee. The $2 million she has given to date has gone toward helping young Druse pass Israel’s high school matriculation exam and giving Druse women the skills to work as beauticians. A booklet about the program includes some tributes. “You are doing a great service for women, for whom traditionally it has always been frowned on even to leave their village to study,” said Alham Mand’ar, a young woman who graduated from the cosmetics course. “Because of this one special family, the Everett family, my friends and I from Abu Snan have got this opportunity to change our lives,” said Osama Sheikh, 18. “We will be able to go to university.” The program’s latest objective is to furnish each of the 12 Druse communities in the Galilee with a $25,000 playground; one already is complete. Previously, the Druse communities had no playgrounds, Everett said. Everett says she’s looking for help because of the project’s heft. In addition, she says, the wider Jewish community has a moral obligation to help all of Israel’s citizens. But raising Jewish money for Arabs is no easy task after four years of the Palestinian intifada, especially when the violence has forced the Jewish community to pitch in to meet Israeli Jews’ pressing demands. In addition to the traditional slate of local and overseas projects to fund, donors continue to be tapped for Israel advocacy programs and emergency relief. Some fund-raisers have urged Jews not to neglect the needs of Israeli Arabs, but much of the Jewish community has turned inward during the intifada. In fact, when Everett spoke to other Jews about her project, she says she often was rebuffed. “You know, we have the Jews to worry about,” she said she was told. “We forgot who we are and what our obligations are,” she said, citing Hillel’s dictum: “If I am only for myself, who am I?” Additionally, she argues that focusing only on its own interests works to the Jewish community’s detriment. “If you don’t accept that you are also responsible for the entire community, then your best interests are not being served,” she said. “You can’t treat people badly for long without it boomeranging.” Inequality toward non-Jews in Israel will breed a lack of loyalty and will have harmful consequences, she said. Still, Everett’s crusade comes at a time when the American Jewish community, debating which priorities to fund, feels overwhelmed. Take the federation system, which is struggling to fill intifada-related emergency funds over and above the hundreds of millions of dollars given annually to the federation system’s overseas partners, primarily the JDC and the Jewish Agency for Israel, said Chicago’s Richard Wexler, vice chairman of the United Jewish Communities, the federation system’s umbrella organization. Extra funding requests make for “a difficult uphill climb as people sort through their own philanthropic priorities,” he said. At the same time, Wexler took the Everetts’ philanthropic history into account. “She is and he was, and together they were, just a formidable force for change for those priorities that they identified,” he said. In 1982, the Everetts were escorted out of the federation system’s annual General Assembly for pushing for Ethiopian Jewish aliyah at a time when Israel and much of the U.S. Jewish community were cool to the idea. In subsequent years, Israel mounted several operations to bring Ethiopian Jews to Israel. As a board member of the UJA-Federation of New York, Henry Everett, who waged a crusade against tobacco interests, stridently but unsuccessfully protested the choice of James Tisch — whose Loews Corp. owned Lorillard Tobacco — to head the federation in the late 1990s. The Everetts also backed mainstream Jewish groups like the JDC and Hillel: The Foundation for Jewish Campus Life. “If I know Edith, she’s not going to give up,” Wexler said. “She’s going to fight her way on to that priority agenda.” Bemoaning indifference to her project seems already to have gotten Everett somewhere. In a conversation with mega-philanthropists Michael Steinhardt and Edgar Bronfman, she blasted the Jewish community for what she sees as tunnel vision. Bronfman agreed to fund a playground, his foundation reported. Everett also decided to formally pitch the project several months ago to the UJA-Federation of New York, which has yet to consider the proposal, and to JDC board members last month. A few JDC board members have shown interest, she said.