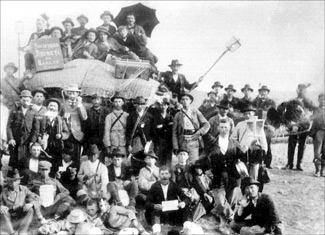 A group of Fusgeyers from Barlad, perhaps Jacob Finkelstein´s group, are shown in this image from the book ´Finding Home: In the Footsteps of the Jewish Fusgeyers.´ (Courtesy of Sumach Press)
Advertisement