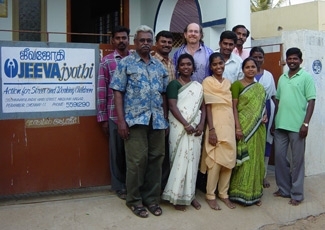 NEW YORK, Feb. 14 (JTA) — Visiting Chennai, India, in early January, Rabbi J. Rolando Matalon was haunted by the families he saw making bricks. “Thirty-five hundred years ago, our ancestors were making bricks like that,” he said. “It started me thinking about freedom and human dignity. These people are slaves.” Matalon, rabbi of Congregation B’nai Jeshurun in New York, recalled one worker in particular. “He was about my age, maybe younger,” said Matalon, 48. “But his eyes — his eyes were dead. “The parsha we read that week was Va’eyra,” the second portion of the Book of Exodus. “The Israelites there are described as having ‘kotzer ruach.’ ” Literally that translates as shortness of breath, but metaphorically it is taken to mean an absence of motivation, Matalon said. “The Israelites couldn’t listen to Moses. They couldn’t hear,” he said. “I saw exactly that in that man’s eyes, and I understood something I hadn’t before about slavery and the human condition. “It’s too late for that man,” Matalon said, “but maybe not for his children.” Matalon is a board member of the American Jewish World Service, which partners with groups in India. Matalon had planned to work with one of them, an organization called Jeeva Jyothi, which works with children and teenagers. But the focus of his trip changed after the Dec. 26 tsunami that devastated Southeast Asia. Matalon spent most of his time in Chennai — which used to be called Madras and is home to many outsourced Western businesses — touring the damage, talking to survivors and witnesses, reporting back to AJWS and helping plan a strategy for long-term help. The AJWS, which so far has raised more than $8.5 million in tsunami relief, flew 7,000 pounds of medical supplies to India, Matalon said. The damage in the city itself was negligible — Chennai is separated from the ocean by a wide beach that the waves didn’t cross — but fishing villages up and down the coast were hit. There were relatively few deaths but a great deal of destruction, Matalon said. The survivors need help in reconstructing their lives. They also need psychological counseling, something India is underequipped to provide. “There are more than 1 billion people in India, and somewhere between 4,000 and 5,000 licenced social workers and therapists,” Matalon said. Many of the survivors with whom Matalon talked, through an interpreter, were fishermen. “They were out on the sea when the tsunami struck. They didn’t know anything had happened until they got home and saw the devastation,” he said. “The water came in and took their possessions, destroyed what they had, and then left. Now they’re afraid of the sea. They don’t want to go back out.” The country’s caste system, still strong despite being formally outlawed, has made it harder to get help to some survivors, Matalon said. The fishermen and their families belong to a fairly low caste and their assistants belong to an even lower one, and often simply are not given aid, he said. Matalon is no stranger to helping the less fortunate. Born in Argentina and descended from Syrian Jews, Matalon was ordained at the Jewish Theological Seminary in New York. Now one of B’nai Jeshurun’s two senior rabbis, he works for human rights around the world. Matalon was shaken when he toured the brick-making and rice-drying plants near Chennai, where workers and their children were indentured for life. “Basically they were slaves,” he said. Jeeva Jyothi runs classes for the children of some of these bonded workers, and Matalon attended a graduation ceremony as an honored guest. After singing to him, the graduates asked Matalon to sing them a song. Matalon, who sings and plays the drums, took the opportunity to teach them Hallelu, a chorus taken from Psalm 150. There aren’t many words, the melody is haunting and beautiful and he had a drum with him. “They loved it,” he said, “and they learned it easily. So now there are people singing Hallelu in India.” Not everyone can go to India to deliver help firsthand, but we have some obligation to do what we can, he said. “We’re all global citizens, particularly us Jews, by tradition, by culture, sometimes by misfortune. With that comes responsibilities.”