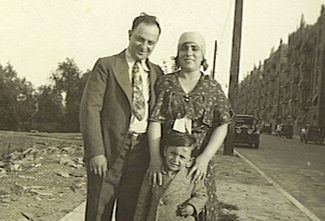 ENCINO, Calif., March 28 (JTA) — “Jews tell stories. That’s the most important thing we do. It tells us about our past,” my son Danny, 14, says. And Passover is the quintessential story-telling holiday. Four times (Exodus 12:26, 13:8 and 13:14 and Deuteronomy 6:20) the Torah commands us to tell our children the story of the Exodus. “And you shall explain to your child on that day, ‘It is because of what the Lord did for me when I went forth from Egypt,’ ” according to Exodus 13:8. And four times during the seder we tell the story. We ask the Four Questions. We relate the story in ways each of the Four Sons understands. We recount the Ten Plagues and sing “Go Down Moses,” “The Frog Song” and “Dayeinu.” And we explain the three symbols of Passover: the lamb shank, the maror and the matzah. For this story of the Israelites’ journey from slavery to redemption marks the defining event in the history of the Jewish people, uniting us as a nation and giving us the laws, hope and responsibility for creating a more just world. It serves as the core of our Jewish identity. Perhaps that’s why the Haggadah says, “Whoever elaborates on the telling of the Exodus is praiseworthy.” “Like our family needs any encouragement,” says Gabe, 17. The telling of the Exodus also can take a more personal form. At last year’s seder, for instance, after we had drunk the last glass of wine and were nibbling on Passover macaroons and mandelbrot — a kind of crunchy Jewish biscotti — the grandparents, spontaneously and animatedly, began telling stories of their childhoods. My father-in-law, Elliot, told of the Shabbas dinners his mother cooked while he was growing up in Queens, and of how she “stretched the chicken.” Every Friday, Grandma Bertha carefully tweezed the few remaining feathers from the, freshly killed, already plucked kosher bird. She removed the liver, chopped it finely and fried it with chicken fat and onions. She then made chicken soup, later removing the meat and baking it. And every Friday night, the family of four sat down to a glass of tomato juice and Ritz crackers with chopped liver, carefully divided. A bowl of chicken soup followed. Then his mother would announce, “It’s a shame to waste the chicken. We’re not hungry. We’ll save it for tomorrow.” Saturday night the same dinner appeared. And his mother again saved the chicken, except for maybe a pulke — a leg — or a fliegel — a wing. Finally, on Sunday night, the family was allowed to eat the chicken. “My father drove a truck. He made a living,” my father-in-law explained. “But that generation was oisgerekhent,” or frugal. “They figured everything out very carefully.” Stretching food for meals was less of an issue for my mother-in-law, Miriam, because her parents owned a small grocery store in Queens. But getting food for celebrations was a problem; her parents, who had emigrated from Russia, didn’t believe in throwing birthday parties or giving Chanukah gifts. One year, Miriam, then a young girl, decided to make herself a birthday party. She cut a large hunk from a ready-made marble cake with chocolate icing that her parents sold in the store according to weight. She invited some girlfriends over, and they scampered upstairs to the family’s apartment with the cake. But her father soon followed. “That’s not a birthday cake,” he announced. “It’s a cake for the store.” “I never understood that my father was running a business,” Miriam explained. “I always wanted things that he had in the store, like the Shirley Temple doll he put in the window.” Later she realized that her parents had other things on their mind. It was the Depression and they were operating from a survival mentality. My mother talked about growing up in Rock Island, Ill., with parents who had emigrated from Ukraine and who also owned a small grocery store. Her parents, however, believed in giving presents. “The thing I remember most is that every December I got a new china tea set — a teapot, cups and saucers, a sugar and creamer,” she said. “I used to have tea parties with my friends or my stuffed animals.” And my stepfather, who grew up in the Bronx, told how his father lost his job as a salesman during the Depression and how when he was 17 he went to work as an usher at the Little Carnegie Playhouse, supporting his entire family on $17 a week. “I think older people like telling stories. They’re actually a lot of fun to listen to,” says Jeremy, 15. Even more, stories tell us who we are. They give us a sense of rootedness and of belonging. They give meaning and purpose to our existence. Yes, we were slaves in Egypt. But we were also Eastern European Jews who fled to America and who drove trucks, opened grocery stores and lost our jobs. Who raised our first-generation children, as my father-in-law said, “as best we could,” and who worked toward building a better life. And just as the story of the Exodus is embedded in our collective consciousness, so the stories of our parents and grandparents must be imprinted in our personal consciousness. As August Boatwright, a character in Sue Kidd’s novel about race in the southern United States, “The Secret Life of Bees,” says, “Stories have to be told or they die, and when they die, we can’t remember who we are or why we’re here.”