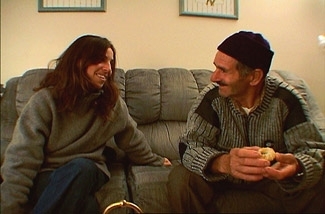 LOS ANGELES, May 4 (JTA) — When Danae Elon, daughter of famed Israeli journalist and author Amos Elon, was six months old, a Palestinian Muslim knocked on the door of her home in eastern Jerusalem and asked for a job. He was hired on the spot. For the next 20 years, Musa Obeidallah was Danae Elon’s nanny, caretaker, confidant and second father. Eventually, the girl went into the army and then became a documentary filmmaker in New York. Obeidallah went back to his village on the West Bank and the two lost track of each other. Three years ago, as the intifada raged on, Elon began to look for Obeidallah. She has documented the search and reunion in “Another Road Home.” The film, which opened last week in New York and will open in cites across North America during the next few months, is difficult to categorize. Many viewers in Israel, America and elsewhere have been touched by its intimate, often painful, exploration of relationships within and between the Israeli and Palestinian families. The same or other viewers have felt uncomfortable or outraged by the implicit ideological message that in the Mideast conflict, the Israelis are the oppressors and the Palestinians are the victims. Elon makes no secret that her sympathies lie with the “victims,” but she denies that she has made a propaganda movie. “This is a very personal film,” she said in a phone interview. “I set out to make a people film, not a political film for leftists.” Though Obeidallah’s home in the village of Battir is only a short drive from Jerusalem, Elon found it easier to track him down and meet him in Paterson, N. J., where six of his sons — he is the father of 11 children — have settled down and established families of their own. Most of the film’s encounters take place in Paterson, now home to some 30,000 Palestinians who have recreated much of the sounds, smells, shops and street life of their homeland. Paterson gained some notoriety after Sept. 11, when the Palestinian community was accused of harboring terrorist Mohammed Atta, before he led the attack on the World Trade Center. After Elon wins the confidence of the six brothers and their families, the grand reunion is arranged. Obeidallah arrives in Paterson from his West Bank village, and Elon’s parents, Amos and Beth, fly in from Europe. The affection between Danae Elon and Obeidallah is obvious and the film is at its warmest when the Arab, like a Jewish mother, worries aloud that the 34-year-old Israeli woman still is unmarried. But the conflict back home, like the elephant in the living room, cannot be ignored, and Obeidallah describes some of his problems in a matter-of-fact manner. Since he was not allowed to fly from Israel’s Ben-Gurion Airport, he had to sneak around two roadblocks and into Jordan to fly to America. He worries that the Jewish state’s security barrier will cut him off from his fields and prevent him from visiting the hospital in nearby Bethlehem. The most searing indictments and most profound pessimism comes from the writer Amos Elon, who has given up hope for a peaceful resolution of the conflict and has moved with his New York-born wife to a small Italian town. “Until 1967, Zionism represented Jewish nationalism, after the ’67 war it became a messianic religion,” he comments. “Now there has been too much blood, too much anger.” For Danae Elon, who acknowledged the difficulties of growing up in the shadow of a famous father, the second reunion is with her parents. Amos Elon, who advised his daughter against making the documentary, “is a very private person. That he consented to go before the camera is the greatest love he could show his daughter,” she said. The film has been aired on Israeli television and found its warmest response among Palestinians and right-wing Israelis. The former understandably like the sympathetic portrayal of one of their own. The right-wingers, said the filmmaker, “saw the movie as an expose of the hypocrisy of Israeli left-wingers, who hold protest rallies for peace but send their sons and daughters to serve in elite army units.” For more information on the film, go to www.anotherroadhomethemovie.com.