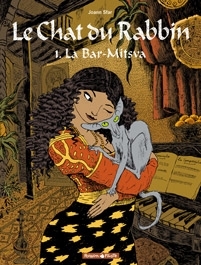 'The Rabbi´s Cat,' by Joann Sfar. (Courtesy of Dargaud)
Advertisement

PARIS, May 12 (JTA) — Comic books aren’t just for kids anymore. In both the United States and France, they’ve been enjoying a popular explosion among readers of all ages. One of the stars of the explosion in France is Joann Sfar, an enfant terrible whose work has become so popular that it can be found on the bookshelves of hip intellectuals there. The prolific Sfar, 33, at last count is the author of 40 different comic-book series, including the wildly popular “Little Vampire” and “Big Vampire.” But only two of them — “Dungeon” and “Little Vampire” — are available in English, and they have been aimed mainly at young adult readers. This summer, however, Sfar’s profile in the English-speaking world is likely to be raised: The first volume of “The Rabbi’s Cat,” one of his best-loved series in France, will be released in English by Pantheon Books in August. Translations of “Big Vampire” and “The Tree Man” are in the works. The series chronicles the adventures of a talking cat, who lives in Algeria with a rabbi and his daughter. The first volume recounts the cat’s desire to have a bar mitzvah. Along the way, it tells the story of how the cat learned to talk — he ate the parrot — and how he took on “the rabbi’s rabbi,” chiding his master’s teacher for his narrow, dogmatic approach to Judaism. Sfar’s universe abounds in supernatural, magical, monstrous and otherwise unusual creatures. Readers will find philosophers, centaurs, talking trees, friendly vampires who grow young instead of old, talking cats and even the Golem. But Sfar plays down the idea that there is anything revolutionary in his style: “I just tell the stories I like to tell,” he says. Breaking from traditional comic books in style as well as content, Sfar’s drawings are fluid, energetic and at times even haphazard. He is influenced less by Marvel Comics than by the cartoons in the New Yorker, and has described his “Dungeon” series — created with collaborator Lewis Trondheim — as “Conan the Barbarian meets The Muppet Show.” The description is apt — it’s a series about a dungeon guarded by a duck. When asked about the abundance of Jewish themes and philosophy in his work, Sfar says that for him Judaism isn’t “an all-consuming passion.” It’s just what he knows best. Sfar’s work is an entertaining and thought-provoking way for readers of all ages and religions to feel the warm glow of Jewish experience and Jewish belief. In a phone interview, he’s extremely friendly and talkative. He chats easily about comic book history, Jewish history, and the influences of the philosophers Nietzsche and Levinas on his work. Born to an Ashkenazi mother from Ukraine and a Sephardi father from Algeria, Sfar says that he feels compelled to educate his readers about the North African Jewish community in France, a subject that he says is misunderstood in France. He says that he often speaks at schools, where he finds that few children of North African descent — Jews or non-Jews — realize that there was a robust Jewish presence there until the middle of the 20th century. “There’s a terrible lack of education there: These children don’t know where they came from,” he says. “I just want to show that there were always these two communities,” Jewish and Arab, “living side by side there.” He adds, “Of course, they didn’t always get along, but their two cultures coexisted for a very long time.” Sfar holds a master’s degree in philosophy, and that is evident everywhere in his work. “I’m more of a talmudist than a kabbalist,” he says. “I’m less interested in mysticism, or in questions of whether or not there is a God, and more interested in the daily life of my characters.” Some readers, he says, have misunderstood the rabbi’s cat’s critical questioning of religious life, “but actually, as the Talmud says, the good student is the one who asks questions. The more you attack the law, the more you reinforce it.” While he acknowledges his commitment to exploring Jewish culture in his work, Sfar insists that his work is not particularly Jewish. Take his sharp sense of humor, for example. “I don’t really understand what that is,” he says, when asked if he thinks his work displays typical Jewish humor. “I think it’s something you find more largely among all people who have left their countries. They developed a form of humor that’s at once tragic and ironic. You see it as well among the Iranians, the Armenians, the Italians. It has to do with a certain form of guilt.” On the subject of guilt, specifically Jewish guilt, Sfar once said in an interview with the French newspaper Liberation, “I would prefer that we not be forced to carry our ancestors on our backs — that there were no law that allows parents to force a veil or a kipah on their children.” Sfar elaborates, “There’s a tendency in the Jewish community to make people feel guilty. It forces the issue to be about roots, but I would rather talk about heritage.” “With your heritage, you have the right to keep all of it or not, as you decide. My father wanted me to marry a Jewish girl, so I could have Jewish children and repopulate the Jewish community. But love happens when and where it happens, and so I could not do what my father wanted. “I’m sorry, but my love life can’t be used to compensate for what Hitler did.” He’s married to Sandrina Jardel — they sometimes work together on projects — and is at work on the next volume of “The Rabbi’s Cat,” to be called “Earthly Paradise.”