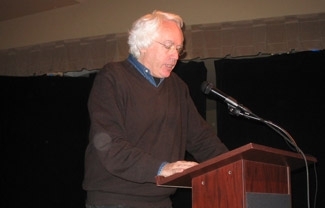 Leon Wieseltier inagurates Hebrew in America at the JCC on the Palisades in Tenafly on May 25. (Courtesy of the UJA Federation of Northern New Jersey)
Advertisement

NEW YORK, May 26 (JTA) — Hebrew is more than a spoken language, more than an ancient tongue resurrected to live again in the modern world. It’s more, even, than the language of Judaism’s most sacred books and the tongue in which those texts have been discussed for millennia. It’s also one of the ties that has bound the Jewish people tightly to each other around the world. “For more than 3,000 years, Hebrew has been the language in which Jews spoke, prayed, conversed with God and man and created wonderfully creative writings in every possible field — religious, literary, legal — you name it,” said Anita Shapira, a professor of Jewish history at Tel Aviv University. But Hebrew is in sharp decline among Jews in the United States — something the Memorial Foundation for Jewish Culture is working to change. Shapira has spent the past year as a distinguished fellow at the Center for Judaic Studies at the University of Pennsylvania. She’s also president of the New York-based Memorial Foundation. She joined a panel Wednesday night at the JCC on the Palisades in Tenafly, N.J., to discuss Hebrew in America, an ambitious new program that the foundation hopes will help reverse Hebrew’s decline. After much deliberation, the foundation decided that the northeastern corner of New Jersey, a New York City suburb with a large, deeply committed Jewish community, would host its pilot “Hebrew in America” program. The foundation, which provided the seed money for the project, is working closely with the local UJA Federation of Northern New Jersey. Fifteen local Jewish early-childhood programs have agreed to host Hebrew-language immersion programs. The foundation hopes the program will grow to include elementary schools, then high schools — and students’ parents — and reach out to the rest of the community. The federation plans to offer at least one ulpan program to adults next year. The foundation hopes eventually to extend the program to other communities around the country. Wednesday’s panel, which included Leon Wieseltier, literary editor of The New Republic, drew an enthusiastic audience that filled the 200-seat auditorium. “Hebrew is the portal to Jewish texts and Jewish literacy,” the foundation’s president, Jerry Hochbaum, said a day after the panel. “What we accomplished last night was meant to set the framework, and to explain why we’re undertaking such a difficult assignment. “Jewish peoplehood is achieved by the transmission of our collective memory and culture, and that’s rooted in our common language,” he said. “The absence of a common language weakens us as a people.” He’s not talking about conversational Hebrew, Hochbaum added — though certainly it would be good for Jews to be fluent; he’s talking about the ability to read Jewish texts. When they can’t read those texts, Jews “are tourists in their identity,” Shapira said. “Hebrew has never been in as bad shape as it is now in America,” she said. “This is very worrying, because it means that the American Jewish community is becoming disconnected from other Jewish tribes around the world.” “Hebrew in America has been neglected for the last 30 years. It was left to die. People didn’t care enough,” Shapira continued. “We’re at a crossroads now.” There were many sociological reasons for that shift, and she feels certain it can be reversed. Wieseltier writes in English and is involved with many issues outside the Jewish community, but he grew up immersed in Jewish culture — he studied at the Yeshiva of Flatbush in Brooklyn — and it still defines him. Guilt is a powerful propellant, Wieseltier said, and American Jews who don’t know Hebrew and who didn’t teach it to their children — in defiance, incidentally, of a biblical precept — should feel guilty. “Ignorance is much more damaging than heresy,” he said. Though it’s possible to read Jewish texts in translation, “every translation is also a conversion” that changes the text, he said. “There never was a great Jewry that believed it could transmit Judaism in translation,” Wieseltier added.