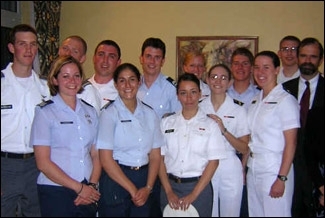 KRAKOW, Poland, June 26 (JTA) — The only remaining synagogue in Oswiecim, the Polish town where Auschwitz was located, is not the kind of place you would expect to find future American military leaders. But for two weeks in June, this is exactly where a group of 12 cadets from the Army, Navy and Air Force academies were, studying the lessons of the Holocaust up close in the town of Oswiecim and traveling throughout Poland to sites of Jewish interest. The Academy Scholars program is sponsored by the Auschwitz Jewish Center Foundation, a New-York based group that operates a museum and information center in Oswiecim. The Auschwitz Jewish Center lends a rare Jewish presence to this town, which had a prewar population that was more than one-third Jewish. The center contains photographs and documents about the Jewish history of the town, as well as the restored Chevra Lomdei Mishnayot Synagogue. By exposing these future officers to the history of Jews in Poland and the history of their destruction, as well as the political and cultural context surrounding the Holocaust, organizers of the trip hope to instill in them a heightened sense of moral and responsible thinking. For their part, the cadets said they appreciated the chance to travel to Poland, and the deeper lessons of the journey were never far from their minds. “In our lifetime, the last Holocaust survivors will die. There needs to be people like us to say it happened.” said Marc Bidder, from Boca Raton, Fla., and a cadet at West Point. Bidder made his comments at a dinner in Krakow at the residence of the Kenneth Fairfax, the U.S. consul general. Bidder, who is Jewish, said his family had no military background and didn’t want him to go to the academy, but after Sept. 11, he felt an obligation. “I wanted to give back to the country,” he told JTA. “After 9/11, I didn’t want to sit back but to be a part” of preventing another terrorist attack on the United States. At the reception at his home, Fairfax told JTA that Jewish events constitute a large part of his job. “I go out of my way to do more Jewish stuff,” he said. The Academy Scholars started their journey in Washington, with an orientation, meetings with U.S. officials and a trip to the United States Holocaust Memorial Museum. They then traveled to Warsaw, where they toured the sites of the Warsaw Ghetto and met their counterparts from a Polish military academy. The trip included stops in Krakow to explore Kazimierz, the historic Jewish district, and excursions to smaller towns that used to be centers of Jewish life. The core of the trip involved an intensive study of Auschwitz, both the camp and the town. Cadets visited the Auschwitz-Birkenau memorial site and heard lectures by staff there on the history of Jews, Poles and gypsies in the camp, issues in preservation of camp artifacts, as well as some of the history of Nazi ideology and military strategy. The cadets also had the opportunity to meet a Righteous Gentile, Stefan Mika, who saved two Jewish men on his family’s farm near Krakow. The Academy Scholars program culminates with each cadet writing a paper on some aspect of what they have experienced in Poland. Helen Barnhart of Hagerstown, Md., plans to be a doctor in the navy. She came to Poland already knowing that her paper would be on the ethics of medical research performed by doctors during World War II who did horrific experiments on Holocaust victims. “Mengele took meticulous notes and research, but people didn’t use it because of how it was gathered,” she said, referring to the notorious doctor at Auschwitz who conducted ghastly experiments on twins, babies and women. “Thinking about what other doctors did makes me think of what I’d do in those situations,” she said.